People often ask my advice about hiking trails. They want to know where they should go, what the conditions are, what they should take. I might be forgiven for thinking I'm some kind of expert or something.

But behind every expert is a long list of lessons learned, things they could have done better. As I hiked back out of a trail today with wet boots after a water mishap, I reflected on some of the missteps in my outdoor life. Let's begin! In the (in some cases, not so distant) past, I:

Forgot an important item, such as microspikes, insect repellant, bear spray, etc, that was essential to that day's success. Once I forgot my whole backpack! Luckily, I was close enough to my house that I could go back and grab it.

Ran out of water, once shamefully asking a fire lookout for some (I would never do this now, instead I would suffer, but it was a long time ago).

Ran out of food.

Went running during a tornado watch.

Got temporarily misplaced and had to look for the trail.

Caught my hair on fire.

Neglected to set new tent up before the backpacking trip, leading to an hour's worth of flailing at the campsite trying to figure it out.

Got my vehicle stuck driving ill-advised roads to trailheads.

Had my brakes go out going down a winding, narrow logging road coming back from a trail.

Jumped off a rock into poison oak.

Refused to pack air mattress to save weight; campsite was rocky.

Climbed up places without thinking about how scary it would be to climb down them.

Fell through thin ice when trying to step off the shoreline of an allegedly frozen lake.

Changed into pants at campsite and climbed to a viewpoint to watch the sunset, leaving shorts out to dry; looked down and saw a mountain goat making off with the shorts.

Ignored tide charts and attempted to cross a bay that was rapidly filling with water; had to sprint back to the other side.

Let go of kayak while getting in it and had to run along the river bank trying to grab it.

If the people who asked me for advice only knew! But what's important is that you learn from your mistakes, right?

Anybody else have any silly things they've done in the woods? 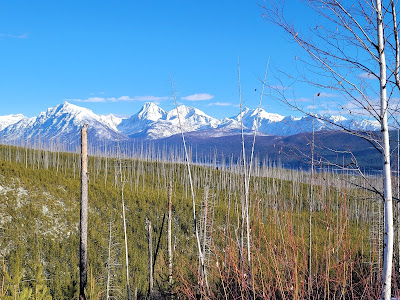