The four young men approached hesitantly as I unloaded my bike from the truck. They looked a little out of place in a national park, dressed in skinny jeans and with tiny fashion backpacks. One sported a leather jacket that would look fitting on the streets of New York.

"Excuse me," one said hopefully. "Where is the Valley of the Sun road?"

I resisted saying that they were standing 50 feet from the Going to the Sun road, a road they had just been driving on for the past 10 miles. Instead, I informed them that the road was right over there, and no, they couldn't drive on it any farther (they must have seen the gate, as it would have forced them to stop), but they could hike or bike on it. They moseyed uncertainly off, unsure of their plans.

This isn't unusual. It happens all the time. I have tried to perfect an unapproachable air, in order to maintain a bubble at backcountry campsites, airport gates, and to discourage serial killers, but it must not be working too well, because people still come up and ask me questions. They even do it in foreign countries. While standing in an immense immigration line in Chile, a person once bypassed all the locals to ask me something in Spanish.

Maybe it's the years of being a park ranger, where I had to keep a straight face while providing answers to questions like, "how many native American ruins haven't been discovered yet?" and "what time of year do the deer turn into elk?" Or perhaps it's from being a supervisor and having to herd cats, I mean seasonal employees.  Or maybe I seem non-threatening, not the serial killer type. Even acquaintances regularly ask me about trail conditions, or where they should hike, often without inviting me along (this is annoying).

I returned from our bike and hike and started loading my bike back into the truck. A man approached. "Sunset?" he asked. I might as well not fight it. I pointed toward the lodge and told him to go sit there. He hurried off happily to get some photos. I hope they were good. 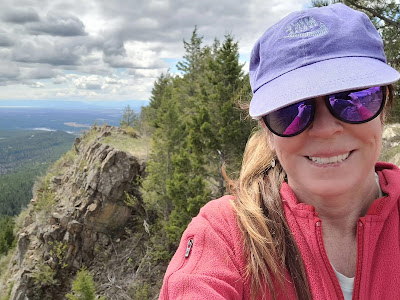