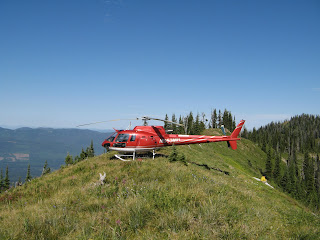 Fire season is ending. Although there are still heartbreakingly beautiful Indian summer days, it won't be long until the first snow dusts the high ridges. The wilderness fires still burn, but we aren't needed there. The crew drifts through the helibase, making plans for winter. People yawn apathetically at the weather report, at the situation report detailing fires we won't be going to. The helicopter contract has a little over two weeks left. 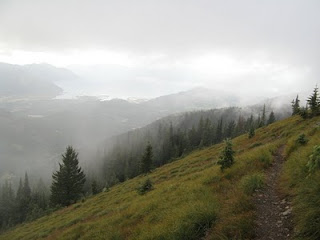 There is little left to do. I find crewmembers in unlikely places, almost locking one in the cache because I don't see him reading a book in the corner. They perk up at the thought of a garbage run and fight over who gets to drive Nick, a fill-in crewmember, back to the neighboring forest. There are long conversations about food and whether it's worth it to buy a ski pass.

We pile in the truck and drive to a ranger district. It takes two hours on a gravel road, but we are so anxious to do something that we are done early building the slingloads of propane to be taken to a radio repeater site. The local helicopter crewmembers show up and complain, "you guys are already done! There's nothing for us to do!"

The crew swarms the helicopter, removing doors, attaching the longline, and unloading gear in a flurry of activity. This is second nature to them now. The helicopter leaves noisily with its loads of propane. The project is done in record time and we return to the trucks and our own thoughts.

Soon everyone will scatter. Some will hang on as long as they can, working on the districts burning slash piles or marking trees. Some will spend their fire money fast and barely make it to next season. I hope some will travel. I will think of them from time to time when I'm the only one working, looking at the snow fall outside my office windows. Then I will remember these bright beautiful autumn days and how they seemed to last forever, and wonder why it was we ever wanted them to end. 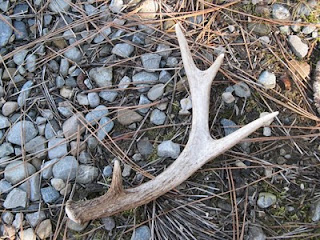