I went to the fire lookout because there were things I wanted to forget. I was tired of the effort of trying to hold onto what I believed in while it slipped through my hands like water. I wanted to listen to the wind instead of my own voice.

Before bolting down the trail to civilization, the regular fire lookout spun the firefinder and showed me how to shoot an azimuth, how to fix the position of a wisp of smoke miles in the distance. There were no thunderstorms predicted anyway, he said.

I looked at the mountains, wanting to touch their permanence. I ran my eyes over the curve of a cirque, the shadow of a lake. I walked an elegant ridgeline south of the cabin. I saw ravens cut black ellipses across the sky. I sat so still I felt like part of the earth. 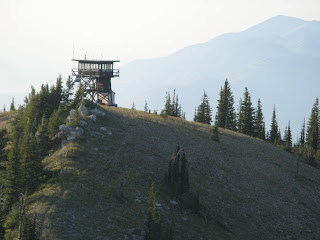 A wayward storm splattered lightning to the north. After dark an orange glow lit up a far ridgeline. I stood on the catwalk, watching it burn.

My azimuth was straight and true. It led to a fire burning like a secret candle deep inside an embrace of trees.

Tomorrow there would be helicopters and spotter planes, firefighters and gear. Tonight it was mine. It belonged to me, high on a mountain in a fire lookout, surrounded on all sides by stars. 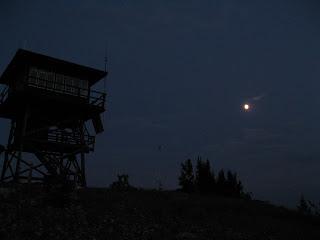