How it all started, part 2

Released from fire training, our motley bunch scattered to our regular jobs. On a day off, I lounged in the ranger boat as Scott piloted it toward the Desolation Lookout trailhead, where I was planning to hike up to Jack Kerouac's former perch and spend the night. The radio startled us with an invitation: did we want to join a 20 person fire crew for a 21 day assignment?

Scott and I looked at each other. What the heck, we thought. It would be something different, and we'd make some money. How bad could it be?

We joined a crew pulled together from another park and ours. Most of us were rookies. The real fire people had long been sucked into the political mess of Yellowstone. We tumbled out of school buses into a 3,000 person fire camp. Every day we hiked long distances. Helicopters rattled overhead, but we never flew in them. Without radios or maps we relied on our crew boss, who didn't look fit but whose boots chewed up the miles relentlessly. At camp, Teri and I used black plastic to create a hooch to sleep under. The work was hard, dirty, and exhausting. And I loved it.

I tied pink flagging in my hair as we patrolled a section of line that the hotshots were burning out. Tim broke ranks and snuck over the hill to look at the main fire. He returned wide-eyed. "The flame lengths are 200 feet!" he reported. Another day, we hiked to the top of a mountain to dig hotline against the advancing fire front. Suddenly the two professional sawyers assigned to work with us shut down their saws and started running."We're getting the hell out of here!" They yelled. The fire boiled over our line and reached out for us as we ran down the hill.

Returning to my park ranger job, I felt changed. I felt impatient with the visitors who just wanted to know where the bathroom was and where they could see animals without hiking. I wanted to carry a pulaski and watch fire on the distant hills.

I would apply for a seasonal firefighting job, I decided. I could always go back to nature walks and visitor centers if I didn't like it. How bad could it be?

That was 23 fire seasons ago. Scott is long gone, vanished without a trace in Glacier Bay. I never went back to the visitor center. How could I? I had dug fireline for 14 hours a day with strangers who were now my friends. I had seen mountainsides lit up at night like a thousand candles. I could never go back. 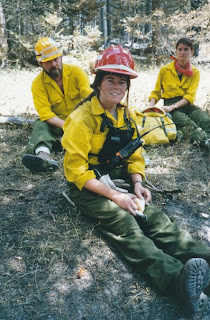