In the five years I spent living and fighting fire in Alaska, I tried to love it enough to stay forever and tried to hate it enough to leave for good. I loved the flying, covering miles and miles of black spruce forest and rivers, occasionally spotting a lonely homestead deep in the wilderness. The fires were like nothing I had ever seen, running through the tree crowns after days of rain. But the winters bore down on me like an oncoming train, the cold drawing deep into my bones. To me Alaska was like a lover you know you can't stay with but yet can't quite leave behind. 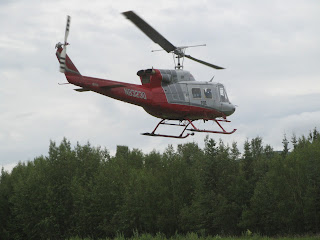 When I left, I took with me memories of five summers of fire. If I had kept a fire diary, a typical day would have gone like this:

Monday. Or is it Friday? Doesn't matter

6 am. Wake up. The 24 hour daylight doesn't bother me like it does some of the firefighters from the Lower 48. There's no need to go to a fire camp briefing, since we are camped right on the fireline. I reach out of my tent and light a Pic mosquito coil, so that in an hour when I get up, the mosquitoes will be bearable.

7 am. I stroll by the crew camp. I am the strike team leader for some native crews. They are packing lunches from the fresh food boxes, pulling back a layer of tundra to reveal their refrigerator- the "tundra cooler" - fruit and vegetables on the permafrost just a few inches below the forest floor. They are from a fly-in village, and like to laugh and tease each other. Already there are some pranks brewing this morning. I'm not one of them, but they accept me. The crew rookie carries a packboard with the essential coffeepot, coffee, and sugar. He knows this is his lot in life until he has a few fires to his credit, and grins cheerfully.

10 am. The crew is hard at work. Their chainsaws growl as they create a fuel break. Some smokejumpers parachute in to help. They grumble a bit at the incessant mosquitoes and inevitable wet feet. They are supposed to be flown out by helicopter later in the day. One declares, "These mosquitoes are awful! I'm not eating anything so I don't have to go to the bathroom!"

12 pm.  We are close to completing our saw line, hours ahead of schedule. I swamp for the sawyers. "This crew really gets after it," one of the jumpers says. Hearing this, the rookie beams. The crew takes a coffee break. The mosquitoes don't seem to bother them as much as they do the non-natives. However, I refuse to be seen wearing a bug headnet. That is a true lower 48 move. Not showering for 21 days, along with the 100 % military DEET, seems to help. The DEET, which comes in mysterious green bottles and can melt plastic hard hats, does double duty as a fire starter.

4 pm. Fog has settled in around us like a thick blanket. The jumper who didn't want to eat anything is heard cussing and marching off into the brush with a shovel. The other jumpers giggle unsympathetically.

7 pm. The camp boss waves at me. He was left in camp today to protect the food against bears, clean up, and have dinner waiting for the crew. Tonight it looks like they are having moose stew.

10 pm. It's still full daylight. I lie in my tent. Two miles away across a wet meadow is a hotshot camp, and across the next marsh another hotshot crew. The two superintendents talk idly on the radio about the next assignment in California for one of the crews.

"At least your feet will be dry," Dave says wistfully.

9 am. The fog lifts enough for a helicopter to fly us to a nearby sandbar in the middle of the river to wait while they do the aerial ignition from our saw line. The crew fans out and explores the area. One of the jumpers immediately begins fishing. The crew finds a moose antler and presents it to me. We watch the helicopter as it drops fire. It catches and boils up over the spruce. Soon we will be gone, the crew back to their village with their fire paychecks, the jumpers and me back to Fairbanks to wait for the next one. We sit in the sand, content. 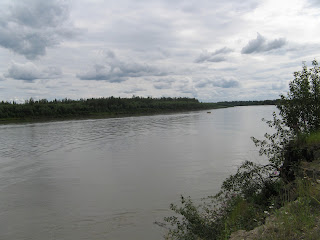