When the firefighting movie Always came out, I was living in Hawaii. Kendell and I sat in his car at a Honolulu drive-in, eating pizza and making fun of it.

"Look at them, trying to use a backpack pump on 100 foot flames," he scoffed. "That would NEVER HAPPEN. This is SO DUMB."

At the time, we had no idea of how truly awful firefighting movies could be (sorry, Howie Long, I know we share a zip code, but Firestorm? Really?) and much as I like Holly Hunter, I had to agree that there was not much that was realistic in the movie. However, there was one scene I still remember.

In it, her reckless air tanker pilot boyfriend Richard Dreyfuss brings Holly a birthday present. It's not really her birthday, but she forgives him when she sees what he has given her...a white dress and high heeled shoes. Girl clothes. 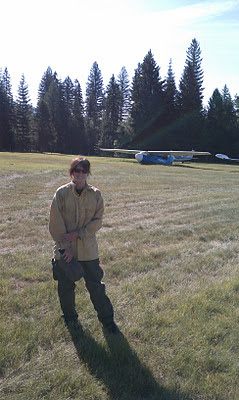 I wake up, put my hair in a ponytail, and throw on nomex pants and a t-shirt. I wear big black boots. Sunscreen is the only cosmetic on my face, unless you count dirt. My feet and my hands are calloused. I am one of the guys. And most of the time, this is ok. The men I like prefer a woman in a Patagonia fleece and no makeup to one who looks high maintenance. But sometimes, I want to wear girl clothes.

I go to the Blue Moon with four men I work with. "I need to go home and change my clothes," I whine. Being men, they look at me like I'm crazy. "What you have on is fine," they say. I'm wearing nomex pants and a too-big hoody. "You look better than all the other girls here," one of them says sweetly, but inaccurately, since the other women in the bar are wearing carefully applied makeup and cute tank tops.

﻿﻿
So every once in awhile, when I don't want to feel like a fire guy, I take my time. Mascara. Dark kohl eyeliner. A black dress that can make a good guy go bad. All things every woman should have, even if she only brings them out once a year. Even if she usually wears Icebreaker and puffy jackets.

I like going to work and not worrying about my appearance. Knowing that most of the time, I can spontaneously go for a hike in what I'm wearing. Feeling ready for anything. But every once in awhile, I want to feel like Holly in the movie where she comes down the stairs in her beautiful white dress and everyone turns to look. Amen, sister. I get it.