Working in the woods isn't glamorous. It's hard, uncomfortable, and sometimes boring. It's no surprise then, that even loggers back in the day occasionally succumbed to the dreaded brush fit.

Firefighters are not immune to the brush fit, also known as an attack of the crazies. On a never-ending rehab assignment, Gerry finally snapped. Muttering about water bars, he flung himself into the fireline and started rolling around, pulling brush over himself. "I'll be a water bar," he growled. The rest of the crew all giggled, which kind of ruined the effect.

A supervisor was so well known for sudden bouts of yelling that the crew surreptitiously (we thought) created a flag to raise when he was on the rampage. "Purple flag warning," we'd whisper to each other. To his credit, he just laughed when he found out about this, and even yelled into a portable decibel monitor so we could see if our ears were being damaged.

Chainsaw throwing, Mark III pump kicking, ignition specialist trainees bursting into tears...you see it all out there. One of my temporary employees once started a heated argument about pilates, of all things. Cold, hordes of mosquitoes, or a general sense of unfairness can all contribute to a meltdown. Some are truly spectacular. A usually calm pilot exploded when the coordinates we were given put us in the middle of a crowded airspace instead of at the helibase. He glared at me as I inched closer to the door of the Bell 212, considering whether my chances would be better if I jumped out. "What!" he snapped. "I'm not mad at YOU. I'm just mad!" Later, overcome by remorse, he followed me around, apologizing profusely. Another pilot angrily kicked his flight helmet across the tarmac, leading to his swift dismissal by the helicopter company.

The best thing to do when confronted by an attack of the crazies is to disengage. Walk away and find something else to occupy yourself, maybe a leftover lunch or something shiny. Because even those old, tough loggers knew a brush fit wouldn't last long. Soon it would be over, and it would be time to pick up the saw again, and get back to work. 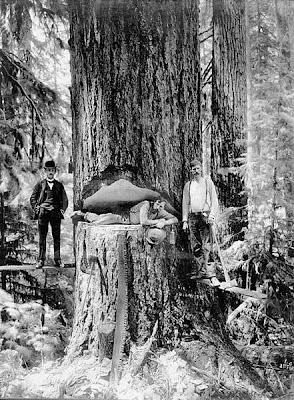