When I started fighting fire, there was no such thing as a trainee. If your supervisor thought you were ready, you took that crew boss or helicopter crewmember assignment. But everything changes, and now we have trainee taskbooks. Almost every position has one. You cart it with you everywhere you go on a fire, hoping to complete some tasks (Coordinate with the medical unit leader! Follow civil rights and equal employment opportunity policies!) even if you aren't officially assigned as a trainee. A side effect of all this taskbook business is a plethora of trainees sidling up to you at a helibase or on the fireline, brandishing their taskbooks, wanting to get something signed off.

Sometimes there seem to be more trainees on a fire than qualified people. On a fire in Alaska, a bunch of air operations trainees shared a rental car and appeared often at the helibase, probably hoping to get a Rare Event task signed off. Disappointed by the routine operation going on, they nevertheless continued to hang out. I seized the opportunity of being a trainee myself to ask them pointedly if they didn't have a meeting in camp they needed to go to, saying their presence was denying me a quality training experience. One of them wrote a message in the dust on the back window of their vehicle. It said, "Don't blame me, I'm just a trainee." At the next morning briefing, we were lectured sternly on the inappropriateness of writing on vehicles.

For some people, the presence of a trainee assigned to them allows them to kick back. They will sometimes be seen wandering the helibase in tennis shoes with a relaxed air, while the trainee rushes about frantically, tearing his or her hair out, scribbling on a stack of paperwork. If anything goes wrong, it must be the darn trainee's fault. However, this is preferable to the micromanaging trainer, the kind who can't let go, who grabs the radio and has to make all the decisions. You can recognize this type of trainer by observing their trainee, who trails behind with a trapped look, in charge of the car keys and lunches and little else.

You can't throw a stick on a fire anymore without hitting a trainee or two. But as much as I sometimes miss the simplicity of the old days, it's not a bad thing. Sometimes a trainee will see things in a different way, will point out something you completely missed. They make you realize you know some stuff after all. Next time you see your trainee on the fireline, now fully qualified, leading a crew of 20 firefighters or managing a complex helibase, it will make you smile. You helped them get there. You have to feel good about that. 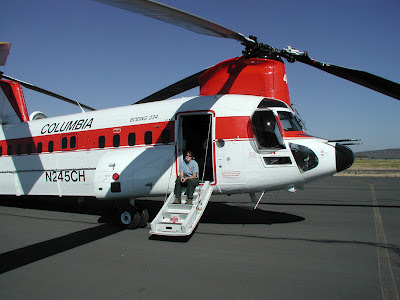