walking on the (not so) wild side

At the burn site, we unload our weapons of mass destruction: propane torches mounted on packboards. The burn piles, although shoddily made by a contractor, don't stand a chance. Most people want one of the torches. After all, this is the fun part: lighting a pile and moving on, trailing fire behind you. In contrast, if you're not lighting, you're following. You're throwing half-burned sticks back into the burn piles, hanging out in the smoke, cleaning up. You hike up and down the hill all day, your face and clothes covered in ashes. There's no glory in it.

But today I don't choose a torch. Instead I pick up a pitchfork and hike down the hill. I soon find myself alone. I follow the smoke through the forest. When I come to a pile, I stop. I pick up flaming limbs, shielding my face from the heat, and toss them back onto the embers. Some of the piles need rekindling, so I build them high, watching as the fire reaches eagerly for the surrounding trees, sometimes torching them out in a sudden rush of warmth and light. It's not yet green-up, so the forest floor crunches loudly under my boots as I walk. Although I try to avoid it, sometimes the smoke burns deep into my lungs. 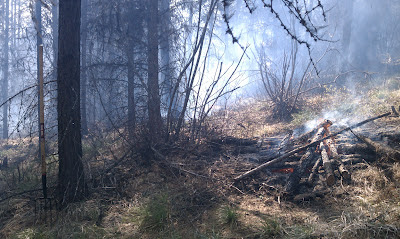 I can tell where my fellow wanderers with pitchforks and rakes have been by the sudden rebirth of fires scattered over the hill. Occasionally I run into one of my friends, and we stop and talk for awhile, but they are loners today too, and we drift apart, following our own paths. Up ahead, the lighters have come to a halt, stopped by overly enthusiastic fire behavior on the private land boundary. We walk among the fires like survivors in some post-apocalyptic landscape. Shadows start to deepen and I make my way back up the hill.

It's the people up in front who get the attention. They move fast, setting the pace, lighting the fires. But if that's what you're used to, try staying back one time. Walk by yourself, making your own trail. Pick up the pieces, stir some things up. Watch what happens. 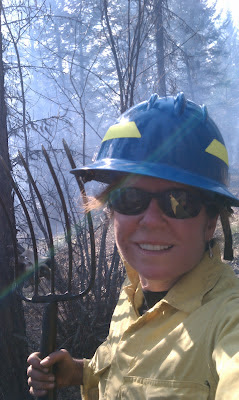