all the world's a stage (sometimes)

Staging. The very word can strike fear and loathing into the hearts of most firefighters. Everyone has a bad staging story. In 1994, my 20 person hand crew sat for several days under a yellow tarp in the 100 degree heat in Fruita, Colorado, along with several other crews. Adding insult to injury, our hours were cut to 8 a day, giving the place the name "Straight Eight Staging." At first we whiled away our time by using the gym at the school where we were stationed, but were soon exiled, due to someone from another crew stealing some weights and ruining it for everyone. Every so often an official looking person would wander through the maze of tarps with a clipboard, and we would see crews, suddenly energized, tearing down their tent and heading out for an assignment. After seeing some contract crews leaving before us, we suspected we had become lost in the shuffle, and began assigning each crewmember to sit under the tarp for an hour a day, looking hopeful and hardworking, in case the clipboard-toting man came by. Any crewmembers who were absent when we made the assignments drew the hottest part of the day to be "Tent Mom."

Eventually we escaped Straight Eight Staging for a rehab assignment, which we embraced wholeheartedly, happy to be out of there. Through the years I have visited many other staging areas. They are an unfortunate necessity of firefighter life: a central place to gather resources from which they can be quickly dispersed as needed. Sometimes this never happens though, and you and your crew become residents, lurking around a field, school, or dispatch lawn like a strange group of homeless people who dress in nomex pants and fire boots.

"You guys are going to be really busy here!" the Forest Aviation Officer says. We look at the lightning map. Seven thousand strikes! We excitedly board the helicopter and embark on a three hour recon. At first we look diligently for smokes. After awhile though, seeing nothing but green vegetation, the trainee helicopter manager starts looking at places where he could take his snowmachine, and I look at frozen lakes and hiking trails and ask the pilot to drop me off. We drift through sunshine and rain, a red helicopter among twelve- thousand foot peaks. 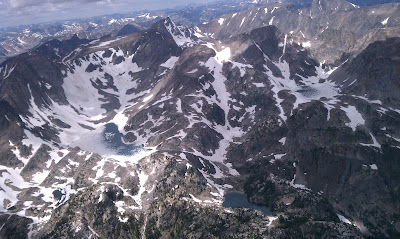 Days pass. We go on a couple of wild fire chases, finding a culprit coal mine throwing up dust but no fires. It is 100 degrees. The crew finds innovative places to hunker and read Kindle books. A Canadian pilot is obsessed with Bigfoot, which we find mildly amusing. "There's sightings all over, eh," he exclaims. We go to a Halestorm concert. I run on a ridgetop trail in the mornings and one of my crewmembers finds some rocks to boulder on. Like territorial dogs, we growl when another helicopter shows up. "Why are they here," we mutter.

It's the staging life. But there are no complaints. It's raining at home. There will be plenty of time to sit at our helibase waiting for a fire call. Until then, we wait for the smoke to rise and an order to come through. We'll be ready. 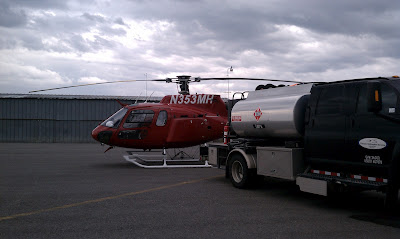