the adventures of Norm the firefighting gnome

This year the helicopter showed up with a mascot. His name is Norm, and he is a firefighting gnome. He even carries a shovel. He is on loan, or kidnapped, from somewhere: the story isn't quite clear.

Norm generally rides in the helicopter in the compartment where the pilot keeps some gear and the tie-downs. We try to keep an eye on him because sometimes he escapes to the fuel truck. "Where's Norm?" can be heard frequently among the crew. It is our mission to take pictures of Norm in as many places as possible this summer. He has yet to make it to an actual fire this summer, mostly because nobody really wants to carry him in their pack as he is made of metal. However, he has been to several helispots so far.

Having Norm along makes things a little more fun, and we're not unique in feeling this way. A pilot I once worked with always had to have two matching stuffed animals sitting on the dashboard. One year he picked some plush vaguely insect-looking creatures, who when squeezed, yelled "Don't bug me!" The "Bug-Mes" rode along happily in the helicopter until the next year when they were replaced by some other toys. The tanker base in Billings has its own mascot, an electronic parrot that watches over the place and can copy what they say. The pilots and staff excitedly chipped in money to buy it.

Does this mean we are just kids at heart? I hope so. In the meantime, Norm lurks in the cargo compartment, ready for his next big adventure. 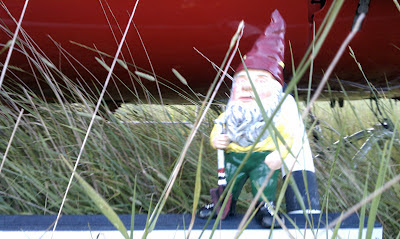