Five am. Time to get up. After 10 days on this fire, I have a routine. I survey fire camp. It's smoky today, meaning that there will be an inversion over the fire for awhile this morning. I go to briefing, and hang around the division breakouts, but I'm not really assigned anywhere. I corral my supervisor, the Situation Unit Leader. He waves vaguely at the map. "We don't have this line GPSed yet," he says, indicating a large swath that covers two divisions. To the uninitiated, this might look like a trail I could skip happily along, but from being out here I can tell it will be two days of hard hiking, contouring around rock cliffs and slogging through a black forest.

I look at my gear. GPS, check. Map. Plenty of water; while I may pass through helispots, there's no guarantee there will be cubitainers there. The boring, inadequate lunch. A pulaski, although I have yet to use it on this fire. I drive as far as I can toward the fire, stopping where some crew buggies have parked. There is no one around. I scout for the line, marking some dozer line on my GPS that hasn't been mapped. Then I start walking.

My job on this fire, Field Observer, is the best assignment out there. On my first fire, on one of our endless trips into the already burned forest to mop up yet again, we encountered a field observer perched on a rocky outcrop. He was watching fire sweep through a tree-filled basin. He wasn't part of a crew, constantly within hearing distance of 19 other people at all times. He wasn't digging in the dirt. He got to go where the fire front was, and sketch a map of its progress. Someday, I thought, hurrying to catch up with my crew.

Now, I walk the line, alone. There are places where the fireline ties into rocks, and I climb up and around them. Occasionally I run into crews, who seem surprised to see me. Usually the only people who wander the fire alone are crew bosses scouting out ahead of their sawyers, or division supervisors. "FOBS," I say in greeting. I imagine they look a little bit envious. I stop for awhile on top of a 9300' peak and chat with a couple of lookouts. We take weather together and compare notes: yes, the humidity really is down to 3%.

One day my friend Brenda, who is here as a fire behavior analyst, and I hike together. I haven't seen her in 12 years. We walk for hours, pausing to have lunch at a high subalpine helispot. We take a shortcut that doesn't turn out to be one. We get caught up.

On my last day as a FOBS I am assigned to GPS burned and cut fences. Really, there isn't much work left and I know enough to take my time. I listen to music as I walk. It is 95 degrees. I think I hear a rattlesnake, but as I look around I find a small elk antler lying in a group of aspen. I strap it to my pack and walk on.

Later, I will join a 20 person crew, some of whom are my friends. We will save some cabins. We will drive home together and talk and laugh. That will be good too. For now, I have solitude and the sound of my own breathing. I keep going, walking the line. 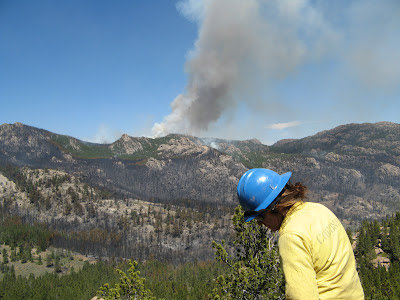