looking for a place to land

"I think I can land there," Brian says. He is looking at an old road a few hundred yards below the fire. It looks unused, brushed in, but there might be just enough space in between the trees for us to drop the rotors into. I watch the left side: there is a little tree too close, but there is room to scoot the helicopter a little to the right and uphill. I scan for rocks and logs where the left skid will come to rest. Everything looks good, so A. and I unroll the 100 foot longline and attach the bucket while B. takes off the two right doors. As the helicopter rattles away to start dropping water on the fire, B. and A. gather their gear: line packs, tools, chainsaw, gas and oil. They hike away uphill, leaving me in the helispot.

It's impossible to count the times I have done this in a helicopter: scanning the ground, looking for somewhere to land. Usually, implausibly, the forest opens up just enough to slide the helicopter into. Old roads, small meadows, gravel pits; once even straddling the railroad tracks. We perch on pinnacles and rest on gravel bars in rivers. There's almost always a way. We don't trust the recon planes' assessments; they mean well but it's hard to locate a good helispot when you are flying that fast and that high. "There's no LZs," they will report, but we find them. Or they say, "There's a helispot right next to the fire," but when we get there it's too slopey, too marshy, or the brush is too tall.

Some helispots provide a sense of adventure. There was the one that was so close to a cliff that I had to employ some rock climbing moves to get from one side of the helicopter to another. In one place in  the wilderness, the passengers had to take off their boots and wade to the lakeshore from the gravel bar we used as a landing area. A family of bears was enjoying the only open area near a fire as some of my crewmembers peered down from the helicopter, preparing to rappel. In Alaska, we would get out in what looked like a pleasant green meadow, only to sink in a bog up to our knees.

At the fire, I wait at the helispot. The pilot returns with a bucket problem which I quickly fix. Two engines barrel through on the supposedly unusable road. The shadows lengthen and the pilot needs fuel. We gather up the gear and fly away. They will be able to get a hoselay up to the fire from the engines, so we won't be needed here tomorrow. We lift off, and I look back one last time. Someday we may fly over, on our way to another fire, and say "I think we landed there once," but we won't really be that curious about it. The grass that was flattened by the skids is already springing back up. The forest is reclaiming it, just another small opening in the woods, found and then lost again. We are gone, as suddenly as we arrived. 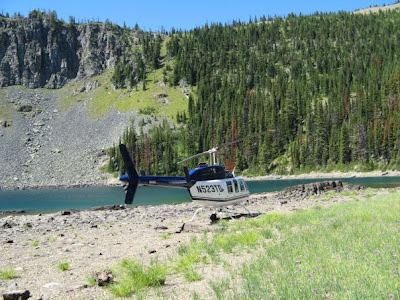