We have been coming to this helibase for over a month, and we know it well. Getting in the helicopter every morning, I know it will be a 30 minute flight, and unless it's too smoky, we will pass over Jewel Basin and Swan Lake on the way. We know the components of every sandwich at Woody's, where our drivers will stop and pick up food, and no longer need to debate: tuna vs. turkey? The odd but appealing pizza sandwich? Heather and I reminisce about one perfect tuna sandwich, once received but never again recreated. We know where the best shade will be at 3 pm, and where the most stinkbugs seem to gather. It's become a routine.

Sometimes we are busy, hooking up the bucket or loading people on the helicopter. Two crewmembers set out on a mission to establish a heliwell. One sits at the radio table, scanning several frequencies and talking to the aircraft. Other helicopters come and go. But this is mostly a helicopter bucket fire, and there are long stretches of inactivity.

We find ways to fill the days. MB, a student part of the week, does her homework. The rest of us are mildly interested in this. Joe takes her table of elements and tries to figure them out. "Sodium," he is heard muttering. "Potassium, helium." People read books of various genres; when we run out we go see the fuel truck driver, who always has reading material, if you don't mind detective novels and war books. We scrutinize each other's food, which ranges from cheesy puffs to hummus, and try to figure out how old the type II pilot's girlfriend is. A bike and money change hands. We lament the lack of a cell tower. Nobody takes on the pickled quail egg eating challenge. If a mission appears, we swarm the helicopter, taking off doors and rolling out the longline. And the hours pass.

Around sunset, we get back in the helicopter for the return flight. Our drivers leave; it will be nearly two hours before we see them again. We are silent except for the pilot's music as we float across the mountains. We will be back tomorrow to retrace these imaginary lines in the sky. The fire, and our helibase, will still be there, waiting for the next day and the next after that. 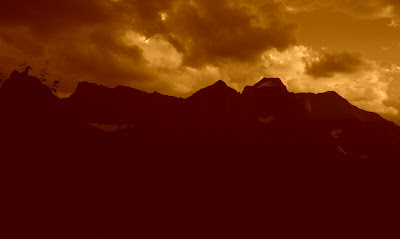