We gazed uneasily at our helibase medevac pad. This was intended to be the landing spot if a helicopter needed to drop off an injured person from the fire to be picked up by a waiting ambulance. It had stayed peacefully empty since we established the helibase at the Kraft Springs Fire. However, it was now occupied.

A cow lay on the pad marker, about where the skids would come to rest. A large cow. And, well, a dead cow.

Setting up a helibase in an active cow pasture has its hazards. Every day we would pile in vehicles and gently herd the cattle away from the helicopters. They were especially fond of the K-Max and liked to graze in its vicinity. People were assigned to camp next to each aircraft in case a wayward cow decided to lean on them. However, we hadn't planned on this latest development.

Moving the helibase was not an option. The overhead team wanted it where it was. How hard could it be, we wondered, as the temperature climbed into the 90s and an interesting odor began to float our way. We would just contact the rancher, and he would come move the carcass.

We soon learned that in eastern Montana, ranchers don't tend to rush over when cows died on the range. The cow stayed. We held an emergency meeting (upwind).

"Just go into camp and have breakfast," John, my deck coordinator, said. "I will have it taken care of by the time you get back." Gratefully, I fled the scene. Driving back, you always had to make sure not to miss the turnoff into the helibase as it was not marked. This time, there was no issue. This was the sight that greeted me (and everyone else driving by on the main road): 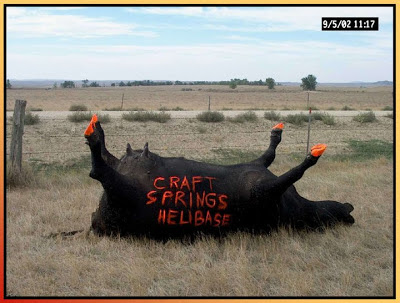 John approached, pleased with himself. "I took two of the lead lines and attached them to two hooves," he said. "Then I attached the other ends to the truck, and dragged it out to the road." He brightened up. "And then, I found the orange paint in the helibase kit that we never use, and decided to make a sign for the helibase. Now everyone can find us!"

The cow was gone in two hours. And yet, its memory remains. Many people who see the picture on my wall in the office recognize it. "I was there!" they say. And this photo has somehow even made it into a national powerpoint presentation on signs in the Forest Service.

Afterward, John only had one regret. "The smell and the bloating didn't bother me," he claimed. "I'm just sorry I spelled the helibase name wrong."