what I learned from the boys

When I started fighting fire in the late '80s, very few women were choosing this profession. Suddenly I found myself surrounded by men. While this might sound pretty great (I've been known to sing, "It's raining men, hallelujah" when some smokejumpers parachute into my fire), sometimes this was pretty difficult in the early days. I had to prove myself, show that I could run just as fast, hike with the same amount of weight, could keep up. Occasionally I had to ignore crude comments; when I once tried to report someone, my crew boss said, "Take it as a compliment". But for the most part, it's been like having a lot of brothers. They look out for me, joke around with me, and (really important) share their chocolate with me.

Through the years I've learned a lot from the fire guys I've worked alongside.  This is not to say that there aren't awesome fire gals out there or men who shouldn't be anywhere near a forest. But for the most part my passport to guy world has expanded my horizons. Here are some of the things I've learned from them:

Make a decision.  When asked if they are available for a fire assignment, most guys say yes. They don't say that they could maybe go, if nobody else wants to. They don't have to check with their girlfriends. They don't agonize over the fact that they haven't really done that job in years and they might suck at it. Sometimes their decisions might be a little suspect (such as ordering four blivets in the face of an oncoming rainstorm), but at least they make them. As a lifelong waffler, I appreciate this about guys.

Say what you mean. When a guy says something, he generally means it. (There are exceptions: when an ex-boyfriend said "I love you forever and want to marry you" that really meant, "I like you, until I meet someone else," but I digress). Being around men all the time forced me to become more direct. Now I sometimes act as a translator: "OK, when she said 'it's fine', what she really meant was..."

Don't take things so personally.  Guys make fun of each other. They call each other unflattering nicknames. They get mad and talk about it and get over it. Working with a bunch of fire dudes, I had to grow a tougher skin. This wasn't a bad thing. Underneath it all, they really do care about each other.

You are the bomb and everyone thinks so too. Fire guys are usually not short on ego. They walk around like they own the place, and assume that everyone else recognizes their greatness, because why wouldn't they? While occasionally this self-assurance is misplaced, what I learned from these guys was that if I acted as if I was confident even if I wasn't, people believed it, and sooner or later, I did too.

Find solutions.  At my old base, we had a washer and dryer, but we knew that once it broke, we would not be getting another. I had to restrict the crew to only washing their nomex and workout clothes. Seeing T. toting a large basket of laundry containing several shirts that looked like the ones he wore to work, I reminded him of the rules. He looked puzzled. "These ARE my workout clothes!" he said. I quizzed him further. "So, you're saying you wear a T-shirt to work out, and then you wash it and wear the same shirt to work in?" "Yep," he said, "And then wear it to go out to the bar later!" As a female with separate outfits to run in, go to the gym in, to work in, and to go out in, I realized that T. (and many guys like him) had not only tripled his wardrobe options, but also had found a loophole in which he could do ALL his laundry at work! Smart!

Laugh more. When you see a group of guys hanging out on the fireline, sooner or later there will be some laughing involved. Granted, they are probably talking about something dumb like poop, but they are having fun. I've never giggled as much as I have around my goofy, sweet guy friends. They torture me with Crossfit moves and get excited about some silly space jump. They bring me brownies from the Glacier Grill and are happy to see me when I show up on fires. They call me "dude" but compliment me when I wear a skirt. I'm happy to know them. 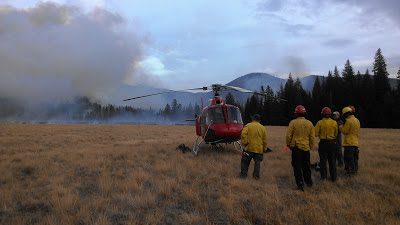