It's time to start hiring seasonal employees for next fire season.  It has been a warm January here in northwest Montana, which makes thinking about fires and helicopters not quite so bizarre as it might be in the middle of a normal winter.

A new crop of applicants is on the hunt, and they are relentless.  My email inbox fills with queries, some sincere, some obviously cut-and-pasted and sent out like a cluster bomb to dozens of supervisors in cyberspace.  Strangely, some of the job seekers seem to believe that I have nothing else to do.  "Call me back," they demand on my voice mail, perhaps not realizing that I have had 20 calls just like theirs.  They call my cell phone at weird times, on weekends and at night (sorry, I'm not that dedicated).  They want to know what is in it for them: how much overtime will they get, how much training.  They complain about the computerized application process.

These applicants will never know what it was like when almost nobody was hiring, when sometimes you got a job because you had a social security number starting with 0 instead of 7.  They won't wrestle with typewriters and Wite-Out to complete an application, having to start over time after time because the boxes on the form were just too small.  They won't have to call to ask if there is a job, using pay phones or calling cards, and never be able to talk to anyone besides a personnel specialist, who would never dream of calling them back.

I would be discouraged about some of the current applicants, if not for the fact that there are a few gems among them.  Ranch and farm kids usually make great employees.  Used to working hard and getting up early, they rarely cause problems and for some reason seem to smile a lot.  People who have had previous jobs like scooping ice cream or waiting tables tend to work out too.  For some reason I seem to have a knack for picking out the good ones, sometimes without even calling references.  "I'm a nice guy," one applicant said.  I hired him, and he was.

So if you grew up on a ranch, fill out your application.  I'll be looking for it.  And smiles are always a plus.

Francisco punches buttons on the treadmill in the fire cache workout room.  "Have you guys been busy?" I ask.  Despite our buildings being only about 100 yards apart, I rarely see the other fire people this time of year, unless I need to trek over to use a fax that actually works, or one of them cruises by in the snowplow.  In my solo office, sometimes I don't talk to anyone for eight hours straight.

He shrugs.  "Winter busy," he says.  I know exactly what he means.

Summer busy is what we are used to.  It is a stretch of lightning struck days, where we load up our packs in the helicopter in the morning and wait for the call from Dispatch.  It is a time of abandoned projects and relationships put on hold.  It's when you spend the day flying from one end of the forest to the other, when you forget to eat, or don't have time.  It's long hot days digging fireline and hiking out of the wilderness with 50 pound packs.  It's what we were hired to do.

Winter busy is different.  It's long hours in front of a computer, writing project aviation safety plans, air crew briefings, and burn plans.  It means wrestling with the unnecessarily convoluted hiring system and seeing where you can cut corners yet again to deal with a reduced budget.  (Do firefighters really need pants? Darn, I guess they do.)  You have to be careful with winter busy.  You have to get up and walk around every so often, maybe shovel some snow every once in awhile, or you might start talking to the mice in the walls.

There are some good things about winter busy days.  You can actually do errands without missing a fire call.  "You better get all your doctoring done now, there won't be any time later," George once told a temporary employee in May.  In winter you can go to the doctor.  You can re-acquaint yourself with your friends.  Best of all, you can take off into the snowy woods with your snowshoes or skis and nobody will wonder where you are.

I wander into the forest behind the office on my snowshoes.  Our running trails are buried in white.  I duck under trees that have fallen in recent windstorms.  I hike up Hamburger Hill.  In the summer, this is a sufferfest, steep and rocky and plagued by mosquitoes.  Now it is quiet; only the deer have been here.  At the top, I take a moment to look around before I follow my tracks back down the hill.  I don't need to hurry.  There is time. 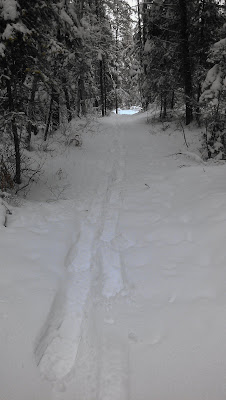 how to be annoying on a fire crew

There is a lot that is irritating about fighting fire.  Getting up at 5 am, for example, and putting on frozen boots.  Generators running all night long.  Portapotties.  But what happens when the biggest annoyance is right next to you, wearing green pants and a yellow shirt?

Everyone has a capacity to be aggravating at times, but most people can rein it in.  However, if you are really determined, here are a few ways to be extra bothersome (Note: while this post is meant in fun, I have witnessed all of these, some multiple times):

1.  Know that you snore loud enough to scare zombies, but park your sleeping bag right next to everyone else's anyway. When confronted, say, "It's not my fault. Wear earplugs."

2.  Wander off. This is especially effective during stressful situations.  Attempt to have your name and "Where's...." in the same sentence as much as possible.  After everyone has been deployed to look for you, return. Get mad when chastised.  Say, "I'm a grown man and I don't have to tell somebody when I have to go to the bathroom!"

3.  Be conveniently busy when heavy things are being divided up to carry.  Don't say anything when you see your coworkers loaded down with 70 pounds of gear and you have less than 25.  Skip off down the trail and lie around at the trailhead, giving them a look of "what took you so long?" when they finally appear.

4.  Be a know-it-all.  No matter the subject, have first hand knowledge of it and don't hesitate to share.  Politics and your lack of belief in climate change are good places to start.

5.  About the fifth day, start whining.  Say, "I'd rather be back home than working 12 hour days." Sigh loudly when asked to do something.  Start calling your friends on other fires to see if you can get a better deal.

6.  Second-guess the crew boss.  This works especially well when it is your first fire.  Even better, go up to the incident commander and express your concerns, without mentioning them to your supervisor first.

7.  Get up early and make a lot of noise.  Rattle plastic bags and stomp around.  Unzip a few zippers. Trip over stuff.  When you wake people up, say "Good morning!" in a cheerful tone.  Look puzzled if they don't seem too happy.  If you can't muster up the energy to be a Rowdy Early Riser, try out its evil twin, the Late Night Loudmouth.

8.  Be high maintenance.  Once stationed in the middle of nowhere, remember something you forgot to do: refill a prescription, send in a job application, call your parole officer.  Declare that you don't eat any processed foods, yet neglect to bring anything you can eat.  Conveniently forget to mention that you are allergic to dust, smoke, and weeds.  Run out of Copenhagen on the second day and make it everyone's problem.

9.  Embrace your inner laziness.  Take a few swipes with your pulaski, then stop.  Disappear into the bushes for an unauthorized nap while everyone else is working.  Volunteer for the jobs that require the most sitting.  Then complain the loudest if the crew isn't getting 16 hour days.

There you have it.  I won't go into the truly advanced moves, such as the Drunken Town Fistfight or the Overnight Missing, Found to be in Jail Crewmember, quite yet.  After all, everyone needs something to work up to.

Illness inevitably creeps into any fire camp of significant size or duration.  Pretty soon it invades every crew, people hacking and sniffling all over the fireline.  Add in a few portapotties without handwash stations and bottles of water floating in a communal trough of ice, and it only gets worse.

Helitack people tend to boycott staying at fire camp for this very reason, setting up tents at the helibase instead.  Crewmembers who get sick slink off to the vehicles to quarantine themselves.  On a fire in Minnesota in October, our whole crew became infected.  K., working as air support, was the carrier monkey.  Sneezing on my computer as he printed out a helibase cost summary, he grumpily declared, "This job has cost me  two marriages and four relationships!"  Maybe there's another reason for that, I thought irritably, sensing that no amount of hand sanitizer could save me now.

The damage was done.  Soon our two vehicles were full of sick people.  For awhile, J. was the lone holdout.  "I have a great immune system," he bragged, while boldly touching every contaminated surface.  It all caught up with him as he boarded a plane home, leaving early to take an exam for a job he desperately wanted.  Despite his misery as he probably infected the other passengers, he did pass the test (Hey there, Trooper B.!)

I went on a scouting mission to the medical tent.  There, they had plenty of cold medicine and cough drops. I asked for some vitamin C or Emergen-C for the people not yet sick.  "Oh, we're not allowed to order anything preventative," the EMT said.  We were doomed.  The two vehicles sounded like rolling TB wards on the 1200 mile drive home.

Everyone recovered of course, enough to find it amusing that we discovered a stash of cold medicine still in the Dodge Magnum the next spring.  It was just a matter of time though.  It was time to stock up again on Purell and Airborne.  The "camp crud" was out there as it always is, lying in wait at the next fire up the road.