Four years, two months, nine days.  Plus seven hours, if you really want to get specific about it, which, often, I do.  I can retire then, with twenty years of being a full time firefighter and several more, uncounted except by me, years of seasonal time.  Let's leave the discussion of whether I can actually afford to retire then out of it for now.

I think about it every time the budget gets cut, when there are new, incomprehensible rules, when politicians say from their well-paid lives that they can just give us unpaid furloughs.  I would no longer have to tell temporary employees that they are getting laid off early to save money.  I wouldn't have to wade through 400 applications for one seasonal position because we aren't hiring enough diversity candidates, and this is the solution.  There would be no more endless paper to do things we used to do with two people and a drip torch filled with diesel and gas, not for me, at least.

But there is this:  the massing of dark, angry clouds on the horizon, spitting out tongues of fire, and the crew gathered together, watching trees ignite over on Mt. Snowy, ready to go, half out the door already as it is.  There is the feeling of translational lift as the helicopter pulls itself reluctantly from the grasp of the earth, that sweet letting go, the inevitability of forward flight.  There is standing on a mountain with a friend with fire boiling around you, not enough so you have to run but enough to make you ready to, enough so you never forget it.  And the stand you made to save someone's house, with your hands only, that and a pocket lighter and what you learned over twenty years of fire.

Time passes whether you're watching or not, whether you have a map for your life or whether, like me, you let the crosswinds take you somewhere you never thought of going.  Fire was a place I fell into.  I didn't know how much it would take away and how much it would give me at the same time. It will be hard to leave, whether it's four years from now, or when it's mandatory, when you get kicked out at a certain age because years ago it was decided what was desired was a "young and vigorous work force" (never mind that times have changed and there are people in their 50s who are more "vigorous" and fit than some in their 20s).  But the good thing about not being on a straight road is that there are always corners ahead.  What lies around them you never can tell.  I choose to believe it's something good. 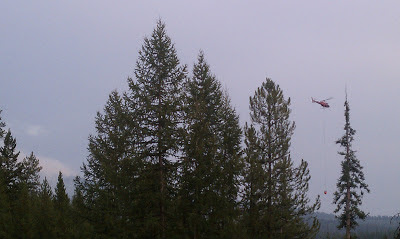