when I couldn't talk

So, I've been on fire assignments for the last 3 weeks, which isn't conducive to blogging, considering that I'm working from 5:30 am to 10:00 pm, with the first meeting at 6:00 and the last at 9:00.  Added to this it is about 100 degrees out.  Predictably, disease started to sweep the fire camp.  When this happens, we tend to find the first person on our crew to fall ill and blame him or her.  Usually, this person looks and acts fine until they suddenly erupt into a sneezing, coughing mess, thus ensuring they have touched everything and infected everyone prior to their symptoms appearing.  We call this person the "Carrier Monkey."  Meanwhile, the Carrier Monkey seeks desperately for someone else to blame it on.  This can cause a few hours of mild amusement, that is unless you have already been infected, in which case you miserably observe the discussion while begging the stingy medical tent to dole out some NyQuil.

After being infected by the carrier monkey, I ended up getting laryngitis for a few days.  While this had some benefits, including not having to make the daily long town drive because I appeared to be so sick, and not having to speak at briefings, I made some interesting discoveries while not able to talk.

1.  People don't like silence.  I knew this already, from once having a supervisor who would call people into his office and stare at them disapprovingly without saying a word.  Eventually the flustered employee would sing like a canary and tell the boss all kinds of things he never intended to ask.

While I couldn't talk, people felt they needed to fill the silence.  They chattered away, and kept asking questions, forgetting I couldn't answer.

2.  I realized that about 30% of what I usually say is probably useless babble.  I know this because when I couldn't talk, I would think of something to say, and would have to weigh whether it was important enough to attempt to whisper/croak it to the other person.  Usually, it wasn't.

3.  You listen a lot better when you can't answer.  Everyone knows this, just like everyone thinks they are a great listener, but in reality, a lot of the time we are only half listening, and often thinking of what we will say when the other person finally stops talking!  Because I couldn't talk, I ended up really listening.

4.  People give you stuff.  Whole bags of Ricola cough drops, cold medicine, cookies.  If you look pitiful enough they even make you dinner.

Now I have recovered enough so I merely sound like I have a case of PGV (Party Girl Voice).  The Carrier Monkey, of course, was over the illness in two days (this is also a common characteristic of Carrier Monkeys: it doesn't hit them hard).  I'm still not talking much though.  If nothing else, it should make the minions nervous.
Posted by Lynn at 3:43 PM 1 comment:

This is what I've been up to for the last two weeks.

I've been working with one of the large helicopters that you see on the news dropping water on fires.  They usually come with an entourage of a couple pilots, at least two mechanics, and some big trucks.

Although it might seem boring (No attacking large flames! Stuck at an airport or helibase! No flying on the aircraft even!) the truth is, we often fight over these types of assignments.  They are a break from our regular job, there's nobody to supervise, and fairly low stress.  So my minions better look out! I might HAVE to take their turn on the next assignment managing this helicopter.  Just kidding. Kind of.

Lately I've been following this thing around: 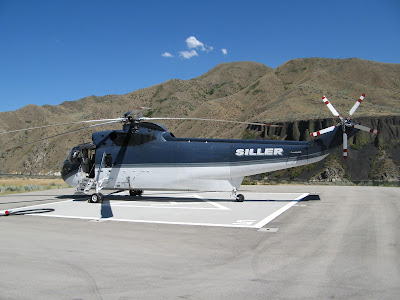 It's been pretty slow.  One of the mechanics claims that it's because he has a force field which is keeping us close to a big city with all the comforts he enjoys.  He promised to turn it off tonight though, so we can actually travel to a fire.

Because it's easy to start complaining about a situation, I decided to play a game called "Smelly Train/ Nice Bag."  I forget where I heard of this, but essentially, the woman who invented it was on a train that smelled unpleasant.  On the plus side, she was carrying a nice purse.  So whenever you have a negative thought, you have to think of a positive to go along with it.

I decided to try it:

It's 100 degrees out and we are outside all day/I'm well-hydrated and enjoying nature.

There are very few fires to keep us busy/I get to hang out with nice pilots and mechanics.

There's no cell service at the base/I don't have to deal with any work problems because they can't call me.

I'm not getting much exercise (see 100 degrees, above)/But I did run a few miles in the hills this morning into a herd of elk!

There are people annoyingly enjoying themselves on the lake nearby/We are here to save them and their property from wildfires.

something that goes on

It's a sad time for firefighters right now, with the deaths of the 19 hotshots on the Yarnell Hill Fire and it also being the 19th anniversary of the death of 14 firefighters at South Canyon (read about that fire here), and truthfully, many more in between that you have probably never heard of.  I'm on a fire assignment right now and will post about that later, but I felt the need to have a happier post today.

Before I left, I hiked into a beautiful area not far from home.  This place is set aside for hikers only, no motorized vehicles, bikes, or horses allowed.