the power of gratitude

We're used to it.  We do our jobs anyway, and save what we can when a fire roars into your community.  But sometimes something happens that restores my faith in people.  On a fire in South Dakota, where the catered food at camp was so terrible that the crew I was supervising chose to take Meals Ready to Eat for lunch instead,  local people showed up with cookies and bagels and snacks, filling up two long tables with food.  On another fire, a man on an ATV brought some of us bottled water as we toiled over hot spots.  Last summer, a woman started yelling at me from the other side of the airport fence.  Slightly alarmed, I walked over, to see she was brandishing a pan of zucchini bars, insisting I take them.

And who doesn't like signs made by little kids: 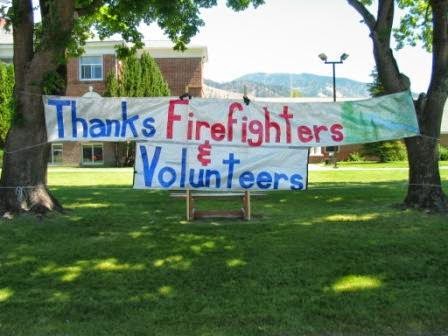 We don't expect people to say thank you.  After all, it's our job, and it's a traumatic time for them.  But when they do, it's a powerful thing.   So thanks to you, people with food and homemade brownies and nice children.  You might have forgotten already, but we remember you.