Days off.  Shorts and flip flops.  Hiking on trails instead of on snow.  Seeing friends I don't normally glimpse between June and September.  What is this?! Is this what normal people who don't fight fire get to do?

Despite needing the money that firefighting brings, I embrace the slow season and the opportunities it brings.  I hike an 11 mile loop in a place where I usually flounder through snow in June or October.  I meet friends and hike to a chalet in the mountains of the national park, where we peer for bears through the brush and watch mountain goats come down from the cliffs.  I kayak the local river and some lakes.

I'm amazed.  This is really FUN.  This is what normal people, with weekends off and time for camping trips, get to do ALL OF THE TIME.

It's sure to come to an end soon, as fire season is creeping slowly toward the mountains.  One more weekend, maybe.  Then I'll be on the road, wearing nomex instead of a cute sundress.  This is good too: it's how I get the funds to take trips to places like Nepal and Antarctica.  It is my job, after all.  But after almost 30 years, firefighting is losing its grip on me, and the call of the mountains and of home is stronger.

I've missed many summers by being on the road, and I'll miss more, but the mountains are patient, and so are my friends.  One day I'll be one of those "normal" people, looking at a smoke column up on the hills and wondering what's going on with the fire, who is there, what the plan is.  I will feel some sadness, I expect.  But then I'll turn and hike on, toward whatever the trail brings.

What would you say if you were a person mildly, ok a lot, obsessed with fire lookouts, and planned to rent another one for the weekend, when out of the blue a fire management officer called you and asked you to staff one for 3 days? And you got paid for it? 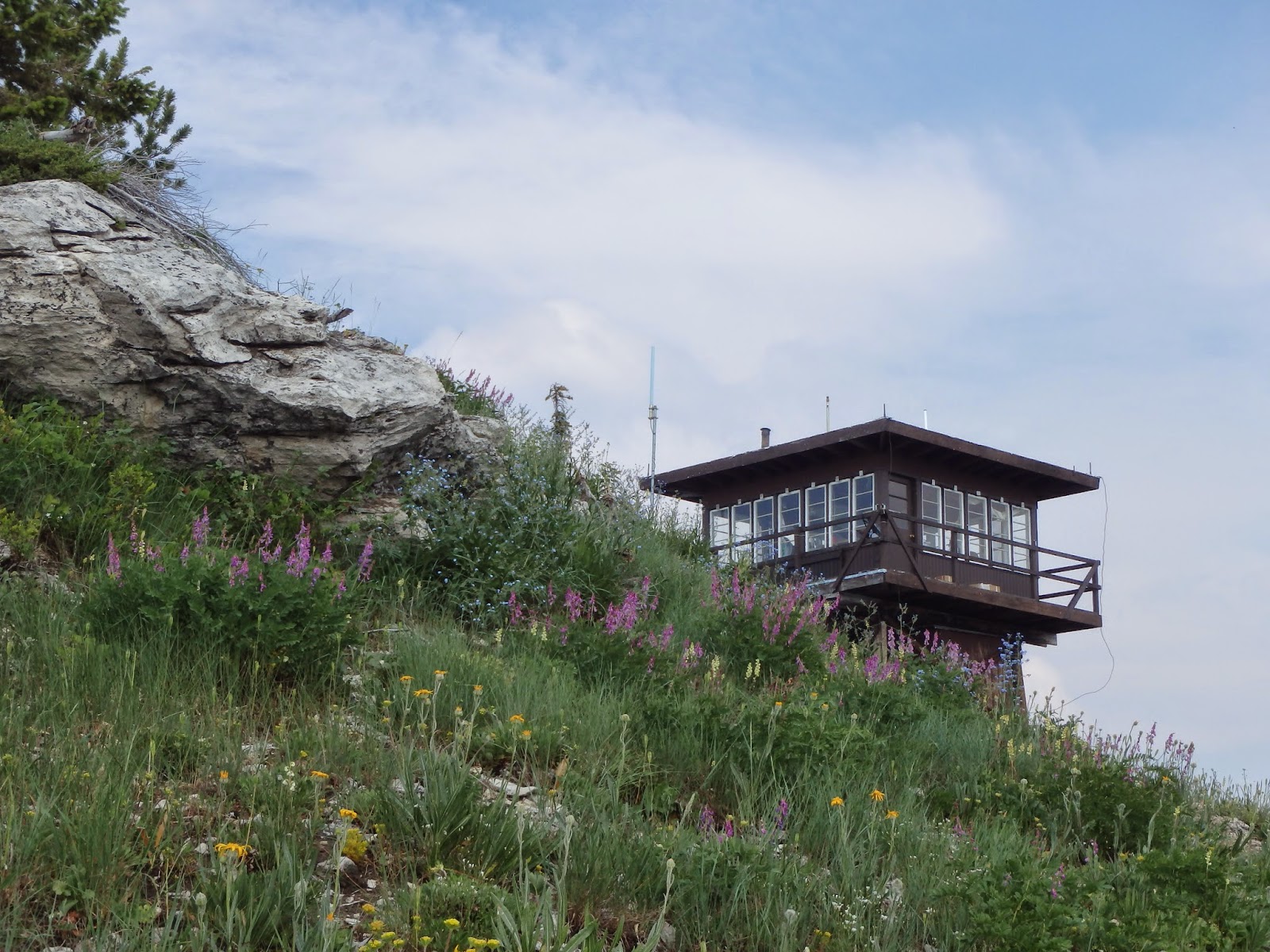 Well, I'd say call me Alanis Morissette, because that's ironic!

Friday morning found me on the trail to Spotted Bear Lookout, on the edge of the Bob Marshall Wilderness, loaded down with food, water, and other necessities like flip flops, a kindle, and a backup e-reader in case the kindle's batteries died.  I plodded along the 7 mile trail. forgetting to even look for the sign nailed to a tree saying "Tired?" partway up the ridge.  Nearly 4.000 feet higher in elevation later, I peered at the lookout, looking impossibly far away on the next hill.  Cruelly, the trail dropped down into a saddle. losing a couple hundred feet before then regaining it in the final ascent.

But finally I arrived and opened up the door to my temporary home. 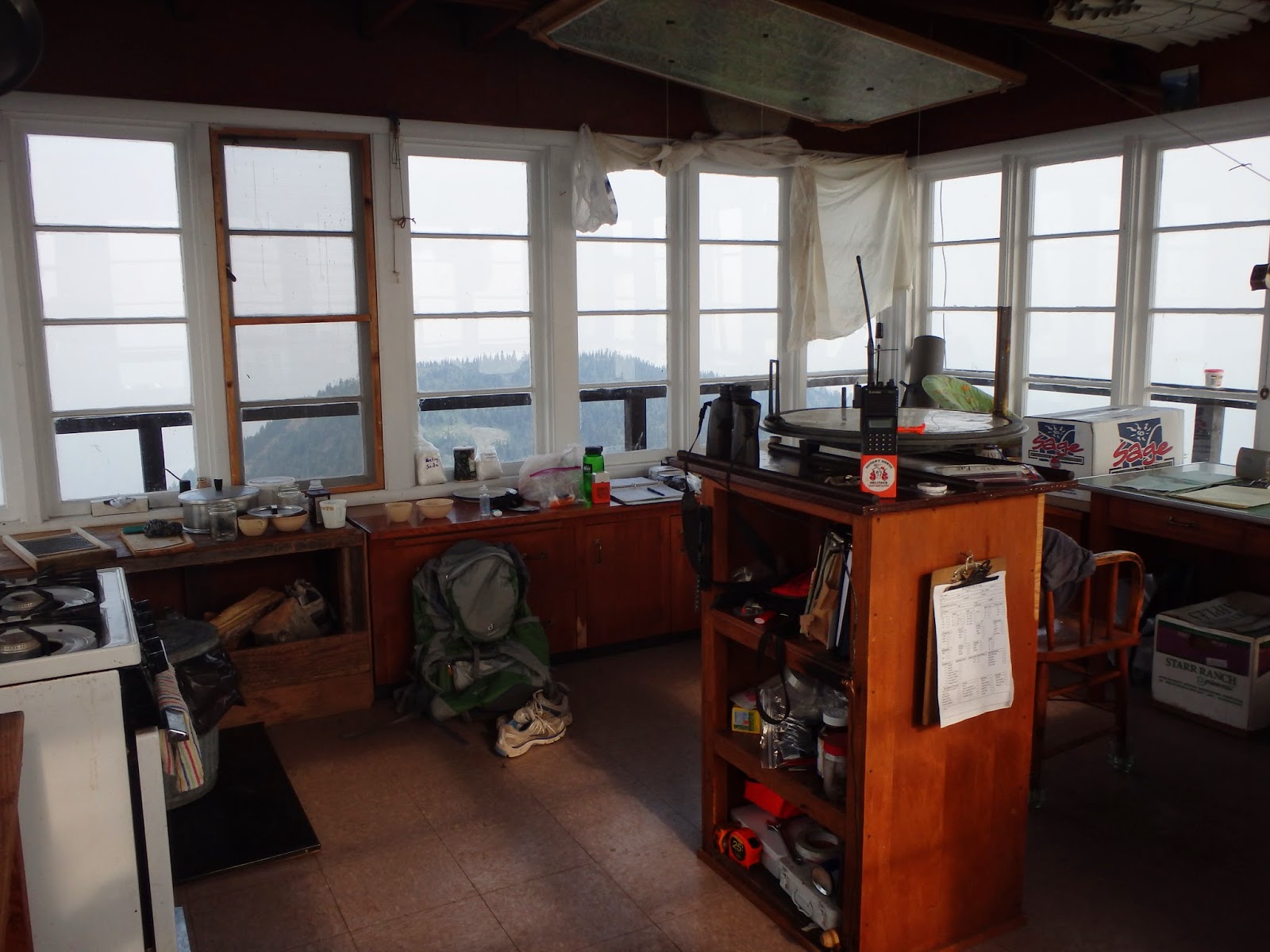 A fire lookout is three things: a building, a job, and a person.  Although lookouts have other tasks, like building maintenance and trail work, there really is one main duty: to spot fires.  Once a day you also take some weather observations and radio them in to Dispatch.  It's not difficult.  In fact, once you have learned to read the country surrounding your mountain, you take plenty of breaks. You can read, play guitar, or write.  Of course, your territory covers 30 miles or more with plenty of drainages. mountains, and ridges to learn. 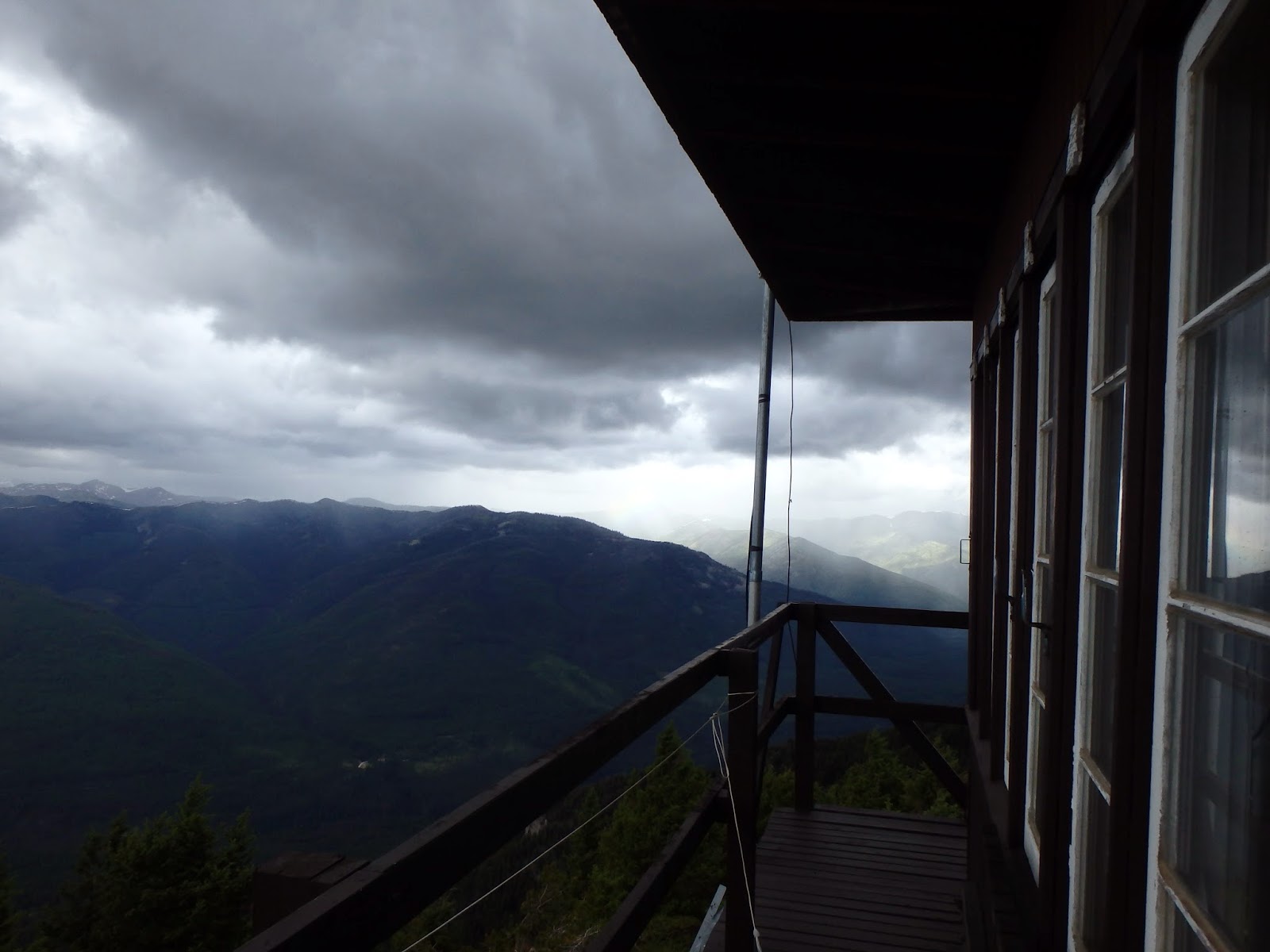 The first two days, smoke from fires in Canada settled in the valleys.  At times, visibility was only about a half mile.  Since there was nothing to see, I hiked up the nearby ridge.  I did an exercise circuit, lifting rocks and doing pushups.  I gazed at the deer grazing below the tower and read books.

On the second night, a strong wind blew in from the west, clearing out the smoke and uncovering snow-covered peaks 20 miles away.  On my last morning, it rained a little.  I packed up and talked to a retired smokejumper named Norm, who had ridden his horse up to the lookout to work on the radio repeater.  Bob also arrived leading a pack string of mules carrying supplies for the regular lookout I had been replacing.  I helped him empty the boxes and put things away in the lookout.

﻿ I headed down in the early afternoon in a light rain, covering the 7 miles in less than 2.5 hours.  This time I had only borrowed the house in the sky: the regular lookout would be back up there the next night.  But you never know the turns in the road ahead.  Maybe someday I will have my own lookout summer.
Posted by Lynn at 8:42 PM 4 comments:

Continuing with my tour of the fire lookouts of the west: 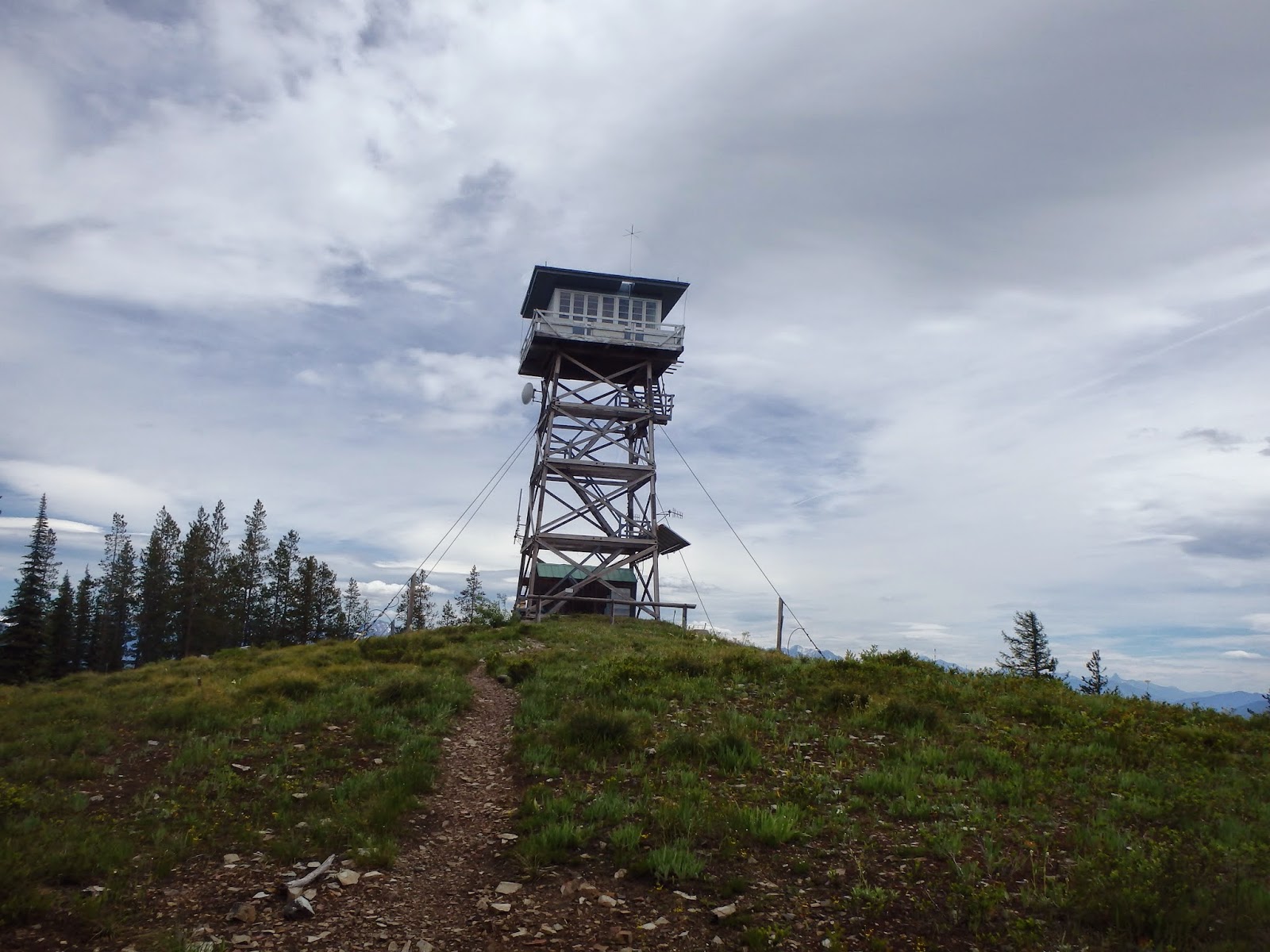 I hiked to this lookout, called Cyclone.  It's up in the north fork of the Flathead River, on the way to Canada.  The lookout is staffed in the summer, but nobody was there. 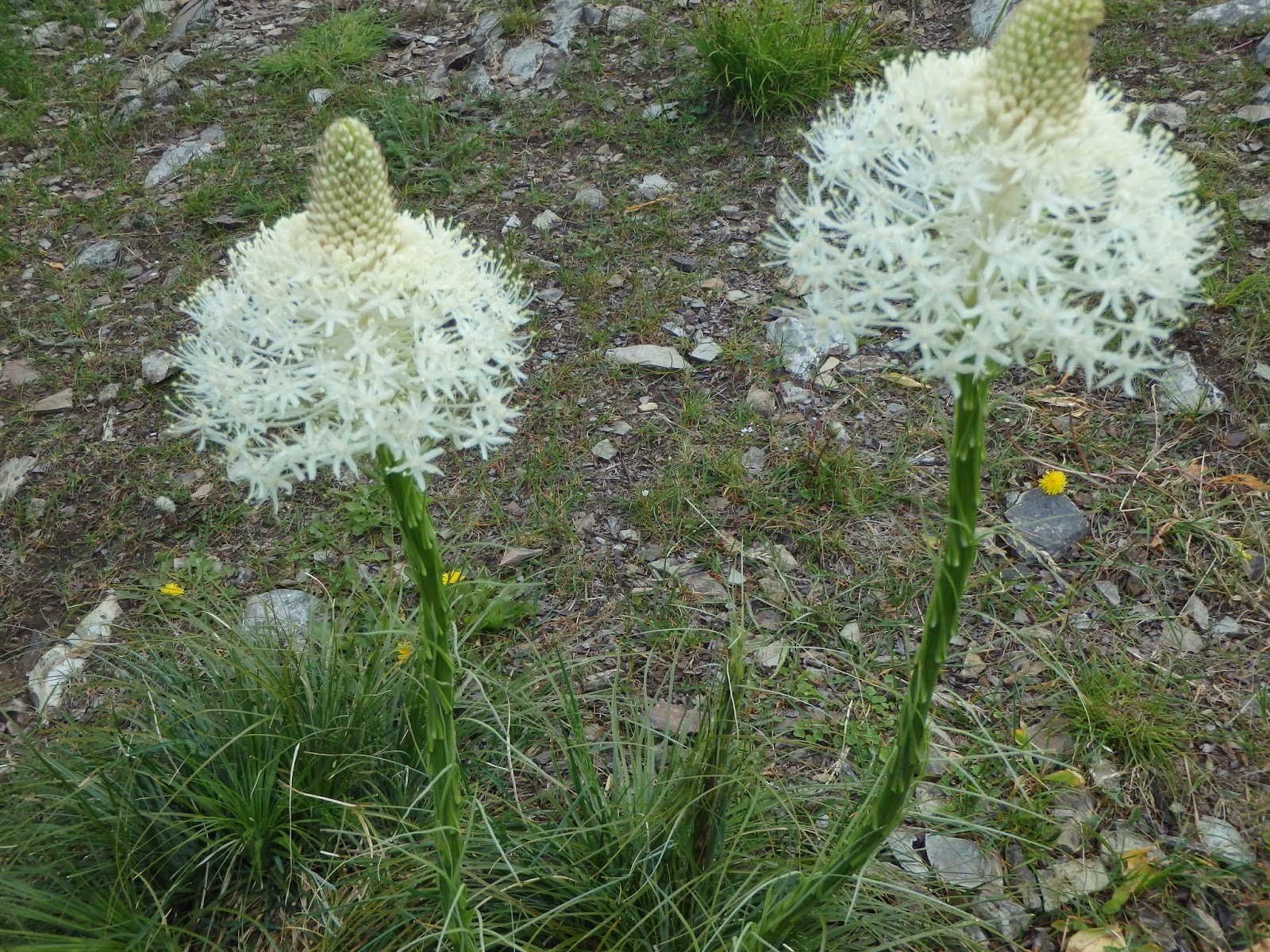 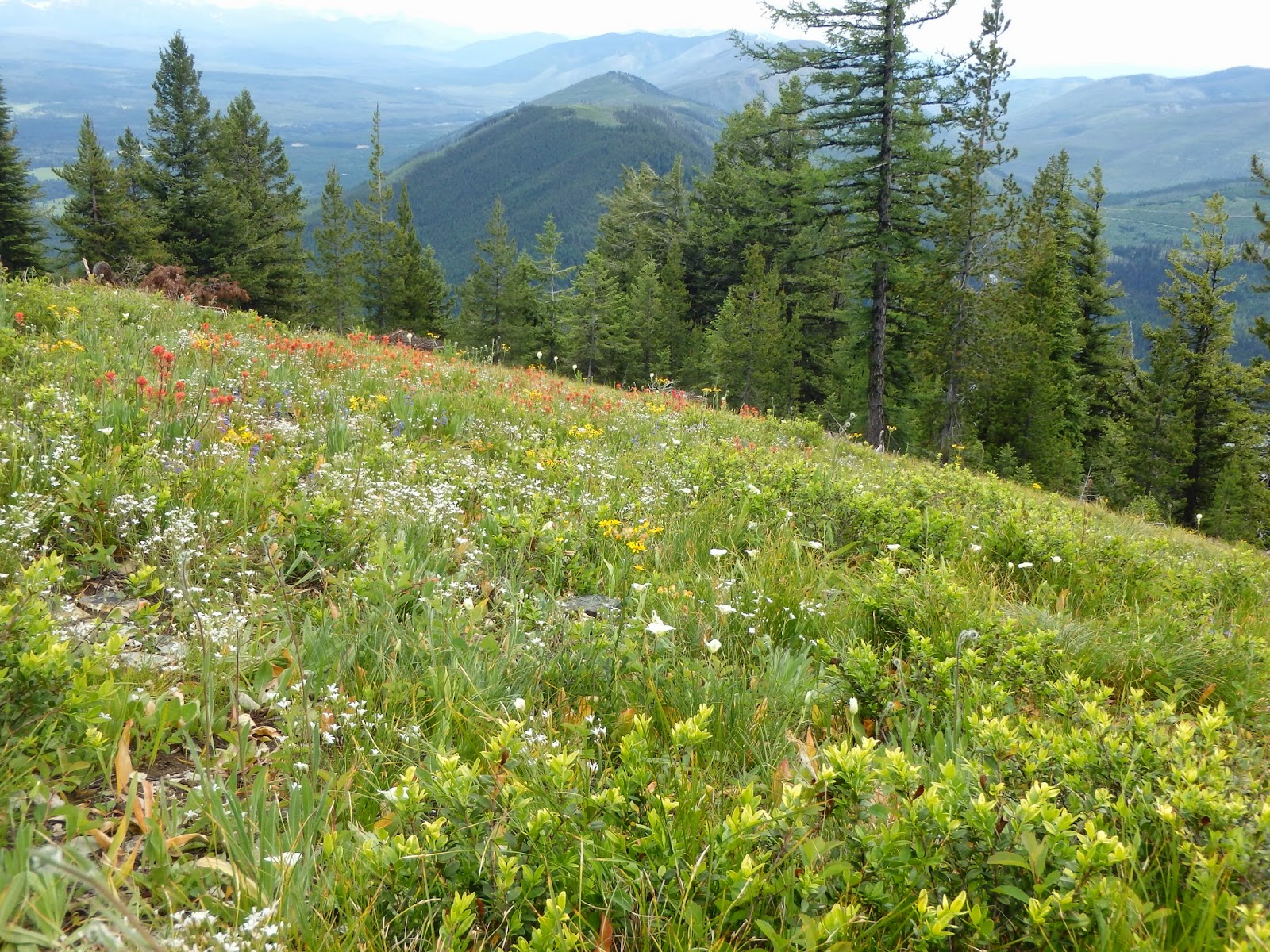 There were beautiful views in all directions. 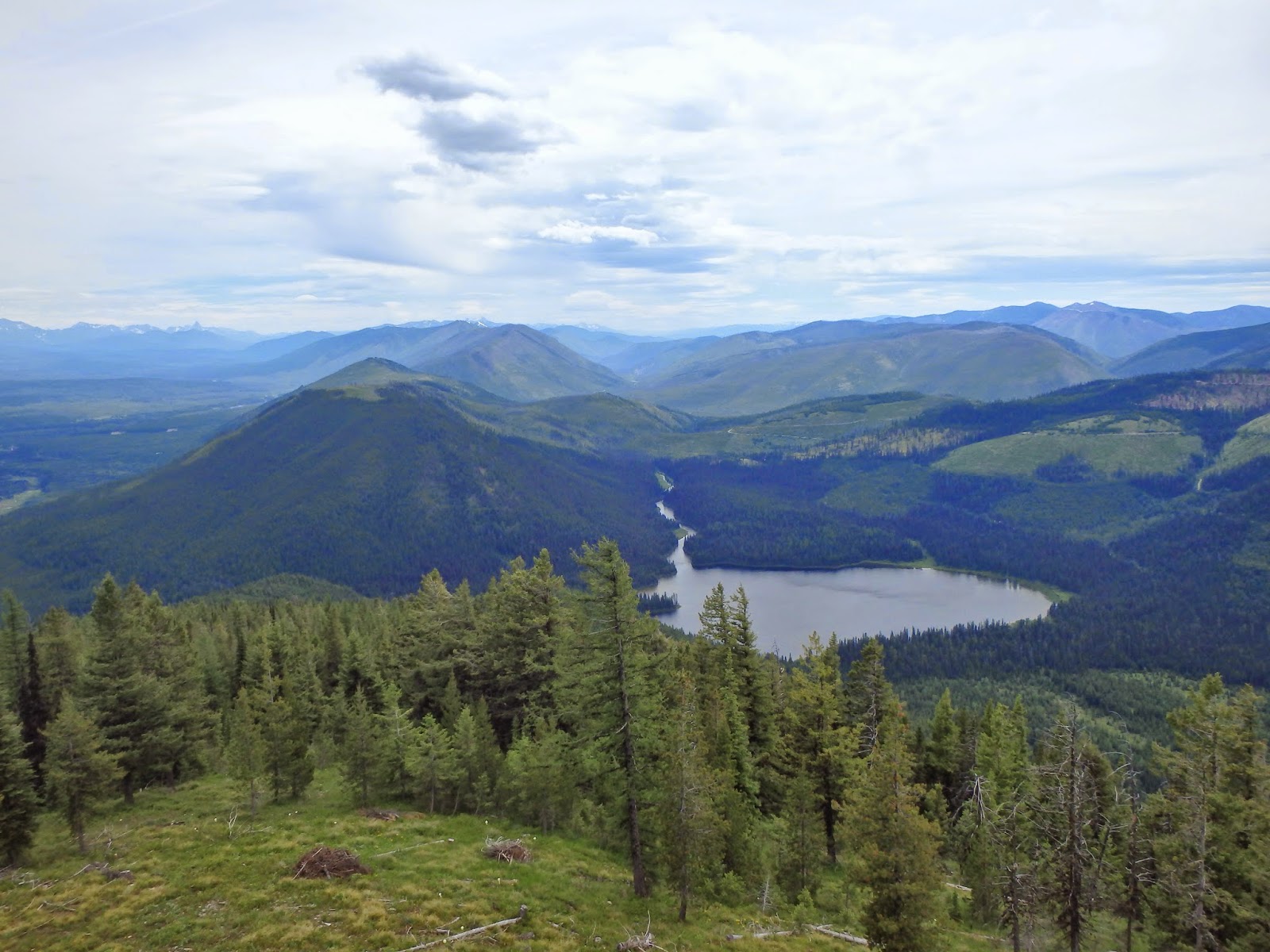 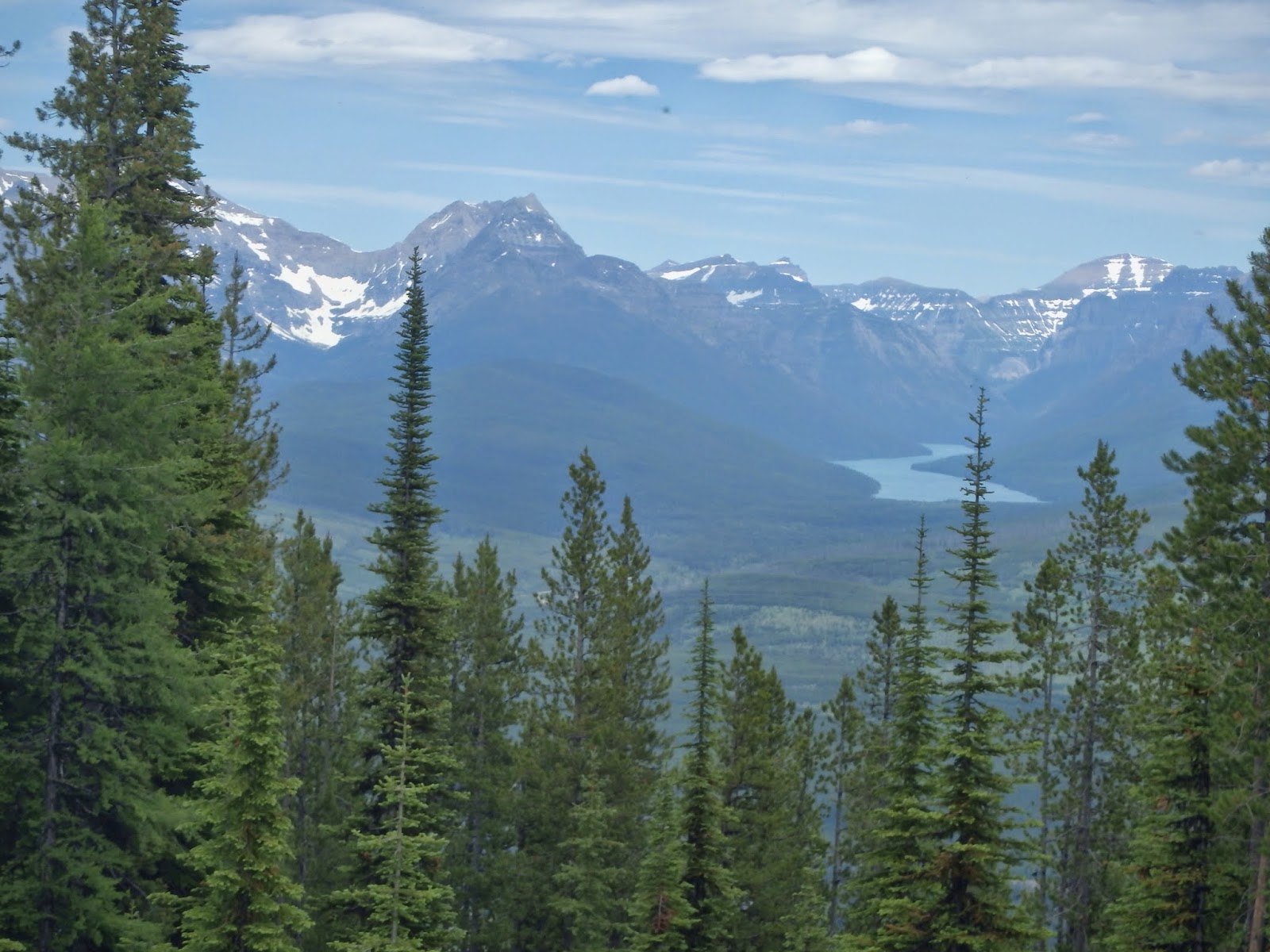 A great hike, mountain views, and a fire lookout: pretty much a perfect day. 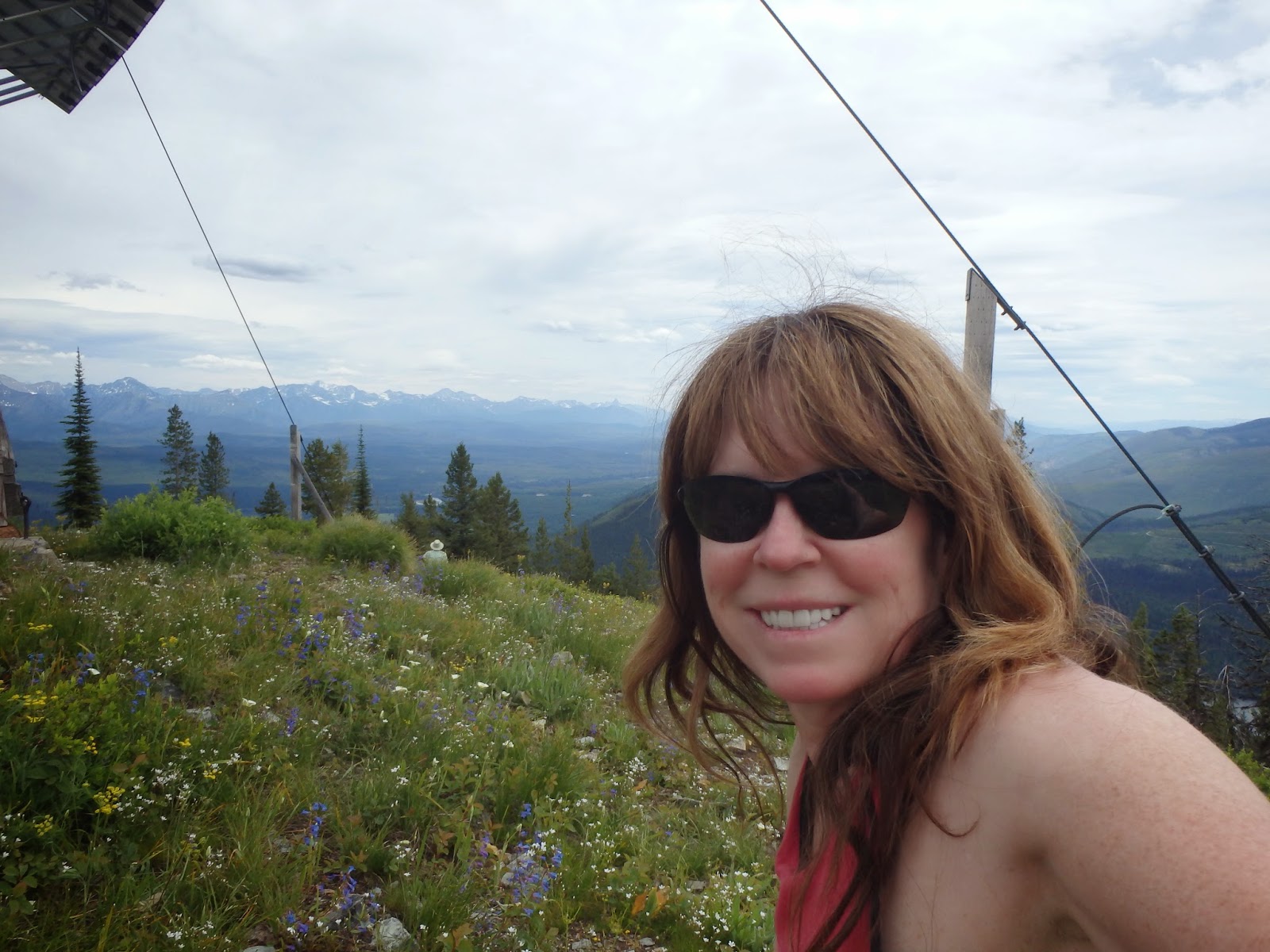 Things people left at the lookout

The lookout is 90 years old, and no longer used for spotting fires.  With $20 and a short hike, you can rent it for the night.  You also get subalpine meadows full of flowers, lingering snowfields, and sunsets and sunrises from a little house in the sky.

So, here's the thing.  When fire season is slow, you kind of start thinking you have a normal life.  You get a little lax abut packing your fire bag.  You might start a home renovation project, or rent a fire lookout for a night.  Your friends might see a glimpse of you for once.  You might actually MAKE PLANS.

But inevitably, the day comes along, say on the morning of a holiday when you have decided to go backpacking.  The phone starts ringing.  Crewmembers are needed for a fire crew to California! How many do you have? By the way, do you have a vehicle for them too? Didn't you say you had a guy who could go with the hotshots? Well, they're going too, better round him up.  By the way, do you have any more people for a second crew?

Once all the wandering crewmembers have been found and presumably on their way, it's time to assess your personal readiness, because the next call might be for you (As a supervisor, I believe my crewmembers should go out before I do; not all supervisors feel this way, some leaping at the first assignment every year, leaving their employees sitting glumly at home in the rain).  Here are some of the essential tasks:

1.  Fire bags packed.  Yes, you hound the crew to have theirs ready at the beginning of the season, but there's always more to add.  Hot where you're going? Throw in some shorts for after work.  Possible cell service? Put in a charger or else you'll have to buy one in Fairbanks, Alaska (not that I've ever had to do this, ahem).

2.  Be a bag lady.  Tote everything to work you might need for the next 2 weeks.  You might find yourself in a vehicle headed for California when you thought it would be a normal work day.  Nobody wants to stop by your house on the way.  You need all medications, credit cards, Kindle, etc.

3.  Get your yard and house in some semblance of order.  Water your garden and your trees.  Drain your hot tub.  Cease house projects.  Call the cat sitter, aka the little girl across the street.

4.  Grab any spare moment you have to do something fun.  See friends.  Go hiking.  Today I kayaked madly for a couple hours up a river, so I could float back down.  I gazed at the standup paddleboarders on the river, aka NORMAL PEOPLE who can plan their weekends all summer.

5.  Relax.  Pretty soon you might be fighting your way through poison oak wearing 15 pounds of extra clothes and boots.  It's ok to watch Say Yes to the Dress educational programming once in awhile.

My crewmembers will soon be swarming northern California; there are only a few of us left here.  But we'll be ready (I think). 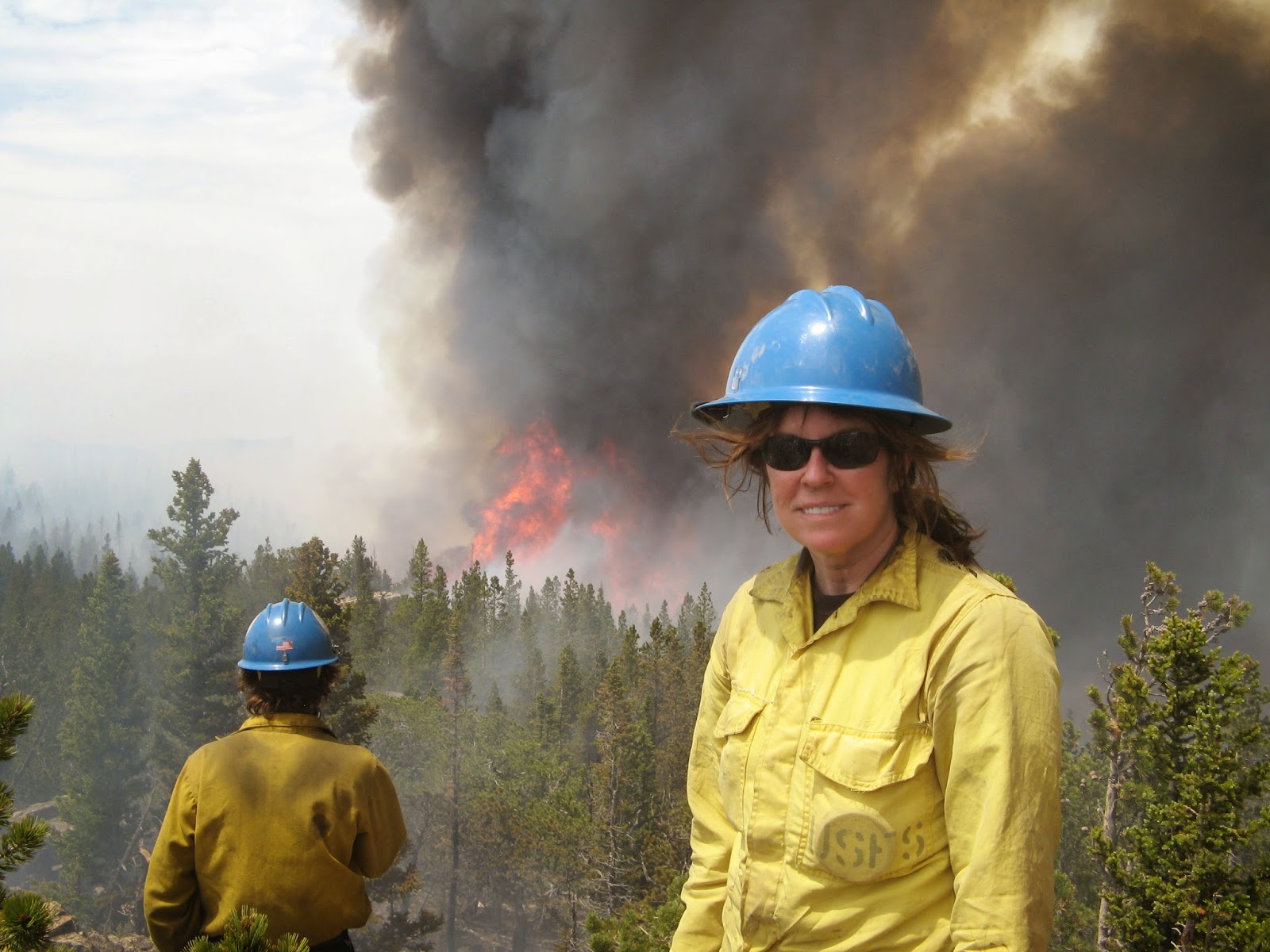