In which we all go back to middle school

When you see video and interviews with firefighters on TV during the summer, we all seem so serious.  After all, it's a job where a mistake can have grave consequences.  It would lead one to assume that we are always taciturn and unsmiling.

Um, not really.  When the situation calls for it, we are focused and decisive.  But when times are slow and we need comic relief, sometimes you'd think we were all 12 years old.  That's when the pranksters come out.

Mike, from a Wyoming helitack crew, was a pro at the hiding gear game, mostly because he had such a poker face.  The victim would rush to the van, having learned that a helicopter he was responsible for marshaling was headed back to the base.  "Where's my hard hat?" he would eventually ask as he gathered up his required personal protective equipment.  "I'm pretty sure you left it out at pad 10," Mike would say, naming the helipad that was the farthest away.  The crewmember would sigh and hurry out there; as he grew smaller in the distance Mike would smirk and pull the missing hard hat out from under a pile of gear.  He was so good at this that his crewmembers fell for it, every time.

Putting something unexpected in someone's pack is always good for a laugh.  While rocks are common, usually only discovered at a rest stop by the unfortunate rookie who wonders why his pack seems so heavy, we often resort to something less mature.  I confess to hiding a rubber snake in Chris's flight helmet bag, which was mean, since he was known to scream and run at the sight of a real one.  However, his lack of response upon finding it was disappointing; I should have spent more money and bought a more realistic one.

Someone enterprising discovered this truly horrible photo of David Hasselhoff: 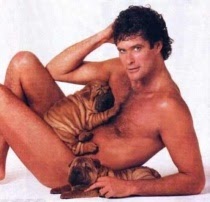 He made a photocopy and put it in Tom's rappel bag with a note saying, "Have a good fire assignment. Love, the Hof".  Somewhat chagrined, Tom returned and reported that he had opened his pack and revealed the picture with some strangers standing around.  This photo became a staple in fire gear for awhile.  However, it eventually backfired on us when we forgot to take down a copy that was hanging on Teagen's locker; it was spied by an eagle eyed fire management officer during an inspection and deemed inappropriate.  That pretty much marked the demise of the Hof love notes.

Decorations are easy and provide much amusement.  A crewmember perusing a newspaper found an adoption ad for a small, hyperactive dog named Bert that had housetraining problems; this was immediately posted at  the human Bert's desk.  Karl filled in with us so long that he took down MB's nametag above her locker while she was on assignment, hid her stuff, and posted his name above not only her locker but also the empty ones she was known to colonize for her overflow gear.  Articles about bear attacks and ads for electronic bear fences were taped to Dan's locker, as he was a known bear attractant.  Guy hated Texas for some unspecified reason, so Texas-related items often showed up on his desk.  We found a blow-up training dummy at a fire station where we were camped; we dressed it in fire clothes and a flight helmet and installed it in the front seat of the helicopter for the pilot to find in the morning.  Later it took up residence in a hotshot vehicle after we found their keys.

Our job is difficult, at times monotonous and at times scary, so I appreciate when I walk by the crew room and hear them giggling about something like a For Sale sign they put on Wendy's car or about the time they called someone on the radio and said their parole officer was on the phone.  It's good to know they can still have fun.  Even if some days you'd swear we were all sixth grade boys.