I first met Gary in 1994.  I don't remember much about the fire: it was in Colorado somewhere, and there has been so much smoke, so many flames since then.  My crewmembers, all Native Americans, liked to play tricks on each other.  Gary was amused by them, even when they found peyote growing at the helibase and wanted him to take it home for them in the helicopter.  When it was slow and he didn't need to fly, he walked the local roads for exercise, disappearing into the distance but somehow always knowing when to return.

That assignment ended, as many do, when it started to snow, but a few years later Gary showed up in Alaska, flying the same helicopter, and came back for several seasons.  We looked forward to seeing Gary in the "Starship," armed with new jokes.  He kind of liked us too, although he kept an eye on us around the helicopter, prompting G. to mutter as we wrestled a 100 pound fresh food box out the door, "this helicopter might be museum quality, but it's not in the museum YET."  We all had Gary stories we liked to tell: remember the time the radio operator wanted him to park farther forward because he couldn't see the helicopter, and how every time after that Gary would park it farther and farther back toward the bushes? Remember how he would dance in front of the other helicopters as they took off, trying to make the other pilots laugh?

After I left Alaska, I lost track of Gary, although occasionally another pilot would mention him.  I heard he was flying a different helicopter, working for a different company.  Then last fall, I heard his name on the radio.  I sat in my truck in a parking lot, listening to an extraordinary story.

In mid-September, Gary was on a helibase in California when an urgent call came over the radio.  There was a crew trapped on the fireline.  They were cut off, surrounded by fire, and in their  shelters, aluminum foil and silica blankets they had pulled over themselves for a last resort.  Like everyone who has ever gotten in one of these, they must have thought these might be their final moments.

Gary got in his yellow helicopter and took off, looking for the crew.  He was asked to pick up a bucket of water on his way, but he refused.  There was no time for that.  He started searching through the smoke and the maze of logging roads to find them.  When he did, he could see they would not survive where they were.  He estimated they had three minutes left.

Over the radio he urged them to get up, get out of their fire shelters and run.  When they did, he told them to run faster, that the fire was catching up.  As the crew ran through a tunnel of fire, he stayed overhead, directing them toward safety.  When they finally made it out of the active fire area, he stayed with them for several miles, showing them the way through brush and game trails to a landing zone.

It was later determined that at the point the fire was burning over the crew, it traveled at the rate of two miles in four minutes, and consumed everything in its path.

Gary has said he was just doing his job.

I know better.  I can't help but think of other firefighters on other fires and other days, dying in their shelters, waiting for help that never came.  Sometimes there is no guardian angel.  That day in September there was.

Much like Catholic school kids, wildland firefighters dress alike on the job.  There's no flipflops in firefighting; for awhile, some safety officers even roamed the woods with rulers, ready to measure your boots if they didn't appear to meet the eight inch high standard.  However, just like some kids modify their uniforms, some of us like to push the envelope.

Shirts:  We are supposed to wear a bright yellow fire resistant shirt on the fireline so that we can be seen easily from the air and through the forest.  Now there are all kinds of colors, from red to blue to even plaid.  My assistant wears a brown one, which means he can't easily be found in the woods, which is possibly his intention.  However, this is better than the guys who stuff themselves into too-small shirts from the 1980s, when the shirts were lighter weight with covered buttons.  They want to look like they've been fighting fire for a long time, but you're not fooling anyone, guys.
Pants:  The pants used to be green and looked suspiciously like what people called "dress pants" in the early '80s.  They had shallow pockets in the front only, which means you didn't lose stuff, because you couldn't carry it.  From there they morphed into an ill-fitting jeans type of pants that are now referred to as "discos," as in, "Tom's rocking the discos today."  Now we have cargo pants, which means we lose stuff because we have so many pockets to put it in.  These also now come in many colors.  They even come in camouflage, which are good enough for military troops in a firefight but not good enough for some agencies since they are not certified.  If you see people with these, they have either come from an agency that is OK with buying them, paid for with the person's own money, or somehow slipped into the budget.
Boots:  Everyone used to wear the logger type boots. If you were from the Pacific Northwest, your whole crew probably wore Wescos, while other crews wore White's.  If you were a rookie, you probably bought Red Wings for your first boots.  Now a lot of people wear hiking type boots, and fierce debate rages over what is OK and what is not.  Since we sometimes hike 20 miles to get out of fires, I'll go with comfy boots.
Accessories:  Most newbies start out wearing bandannas around their necks.  Then they realize this is a rookie move and stop.  It doesn't count if you stuff your bandanna into your hard hat as a sweat band.  Why? I have no idea.  However, doing the Brett Michaels headband look is not cool either.  T-shirts, usually crew ones, are usually worn; some women ran afoul of a tank top-hating ranger when they tried to wear them and found them to be banned.  I see a lot of bracelets, even on men.  Copper is common.  Creative hairstyles appear when hard hats are taken off: mohawks, interesting dye jobs, braids.  "Weird Beard" braided his beard, while A., heading south from Alaska for an assignment, shaved her head one summer.  When I had waist length hair, I used to weave colored flagging into it.
Next time you see a group of wildland firefighters on the TV news, look closer. You might see pink hair, dangly earrings, or mutton chops.

Anyone else out there work in a job where you have to wear a type of uniform? How do you express your flair?

What's happening in the park

Most people don't visit Glacier National Park in the winter, not unless they're here for something else, like the ski area.  In the summer you can hike for days to alpine lakes and fire lookouts, and see mountain goats, bighorn sheep and bears. 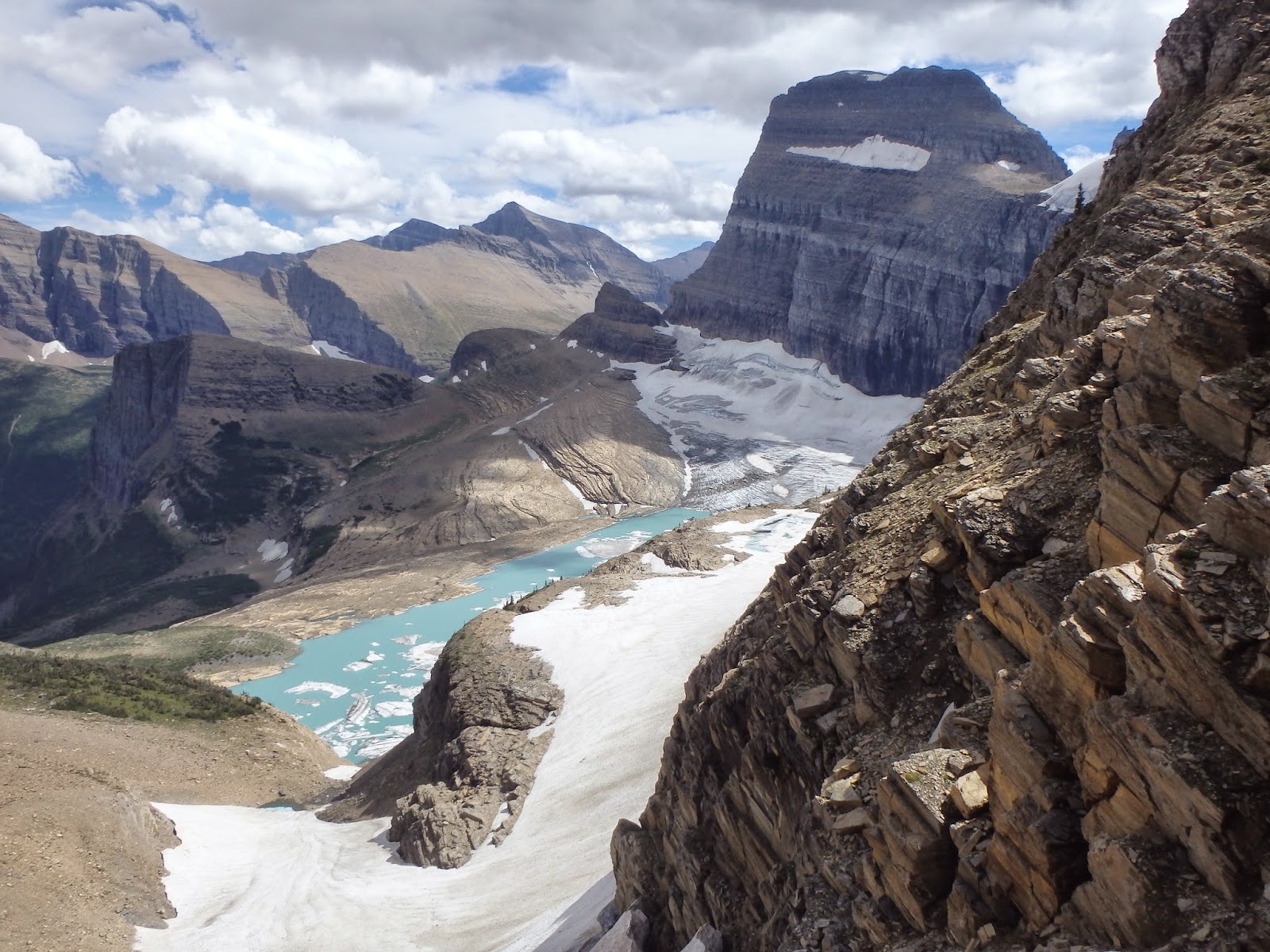 In the winter it's different.  The road on the west side is only open for 11 miles; less than that on the east side.  The backcountry is buried in snow.  The animals are elusive.  In other words, a perfect time for locals to go.

I put on my snowshoes at the road closure.  From here, people can ski, walk or snowshoe on the road, which usually closes in September or October and won't open until mid-June at the earliest.  When the snow melts in the spring, all the bikes come out.

The road winds along the creek and underneath jagged peaks. 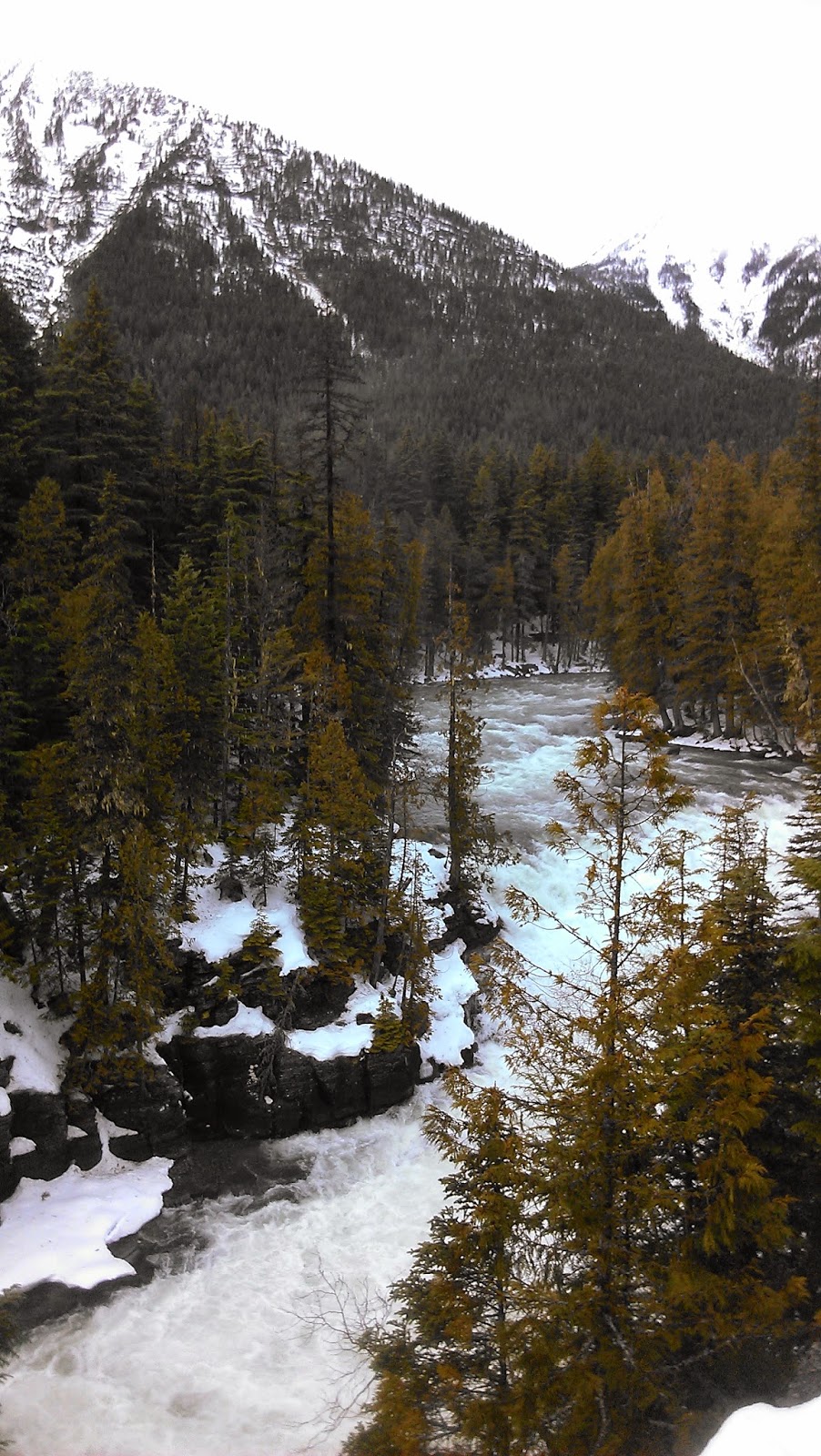 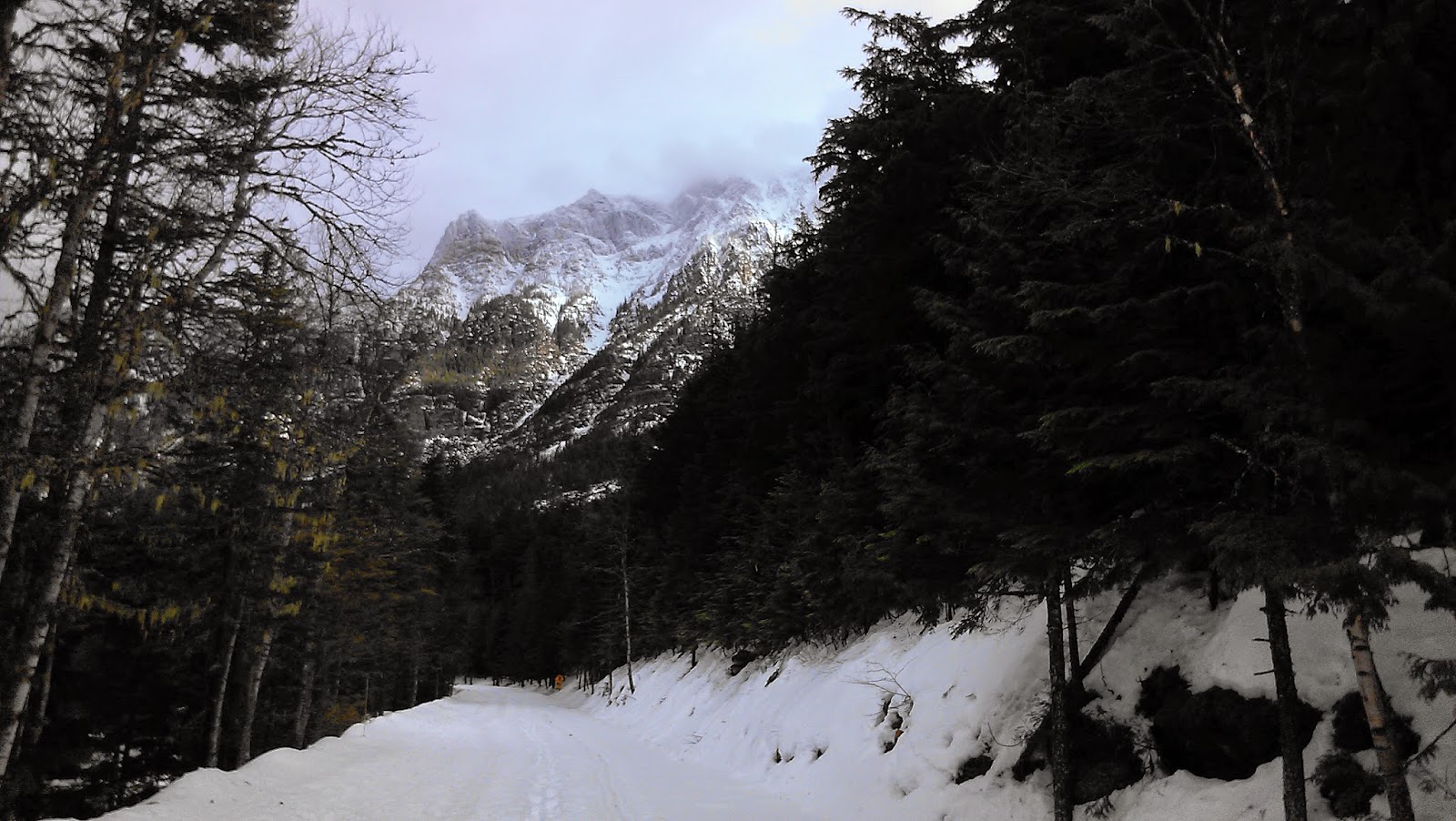 I soon lose most of the other snowshoers, who turn around when the snow gets soft.   The clouds cling to the peaks; it's snowing up high.  Down here the temperature approaches 40 degrees.  The mountains will hold onto winter for awhile longer.  And that's all right with me.  I can wait for the crowds of people, the vehicles that will line this road, even for fire season. For now the park belongs to us, the privileged few who get to live here. 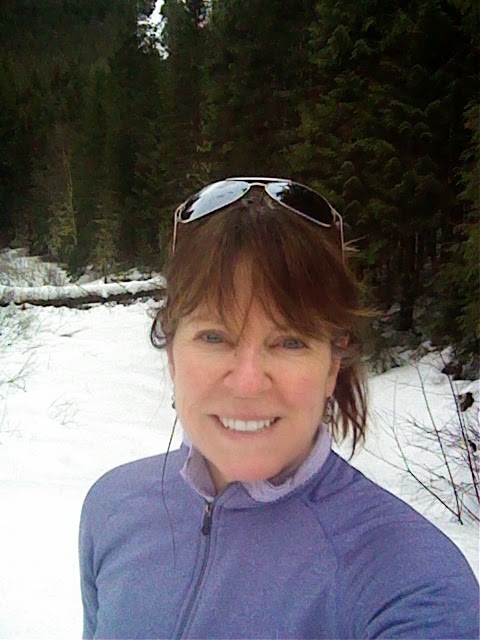 Despite the groundhog, winter seems to be on a break here.  A person could theoretically have worn shorts to run today, if she were so inclined.  In early February! In northwest Montana! The local ski area was advertising "spring skiing" conditions, which typically means mashed potato snow and rain. Since my snowboarding ability and spring skiing conditions don't really get along, I decided to go for a run instead.

As soon as I stepped into the woods I had a sense of doom.  The normally packed down path was soft.  It was full of ankle-twisting holes from where heavier people had fallen in.  I had to run slowly, and even walk down a treacherously icy hill.  This was shaping up to be a BAD RUN.  Runners know what I mean: those runs where nothing seems to go right.

But wait, I argued with myself as I ran (I do this a lot.  Don't you?)  This was the wrong way of thinking.  This was actually a good run, because:

1.  I was able to run.  Lots of people aren't.  I've had two involuntary running breaks, once when I broke my ankle skiing, and another time when I tore my ACL and had to have two consecutive knee surgeries.  Then, I would have given a lot to be able to run, even if it was snowy and icy and annoying.

2.  I was in the woods.  I wasn't on a treadmill or a boring road.  I was running through a quiet forest, and nobody else was out there.

3.  It was warm.  The air felt soft, like spring.  I wasn't freezing or in the middle of a blizzard.

4.  I was wearing running tights and microspikes, both of which weren't around when I started running (you wore sweats, and if it was icy, you just fell).

5.  All this running on trails has helped me stay a runner for a mind boggling number of years.  I've never had a running injury.

6.  When I got home, there would be hot tub, cats, books, and chocolate.

In the end, I ran the route several minutes slower than usual.  I slipped around and fell in some of the holes in the snow.  An enthusiastic dog jumped on me.  But really, all that didn't matter.  I was able to get out there and run.  That was the important thing. 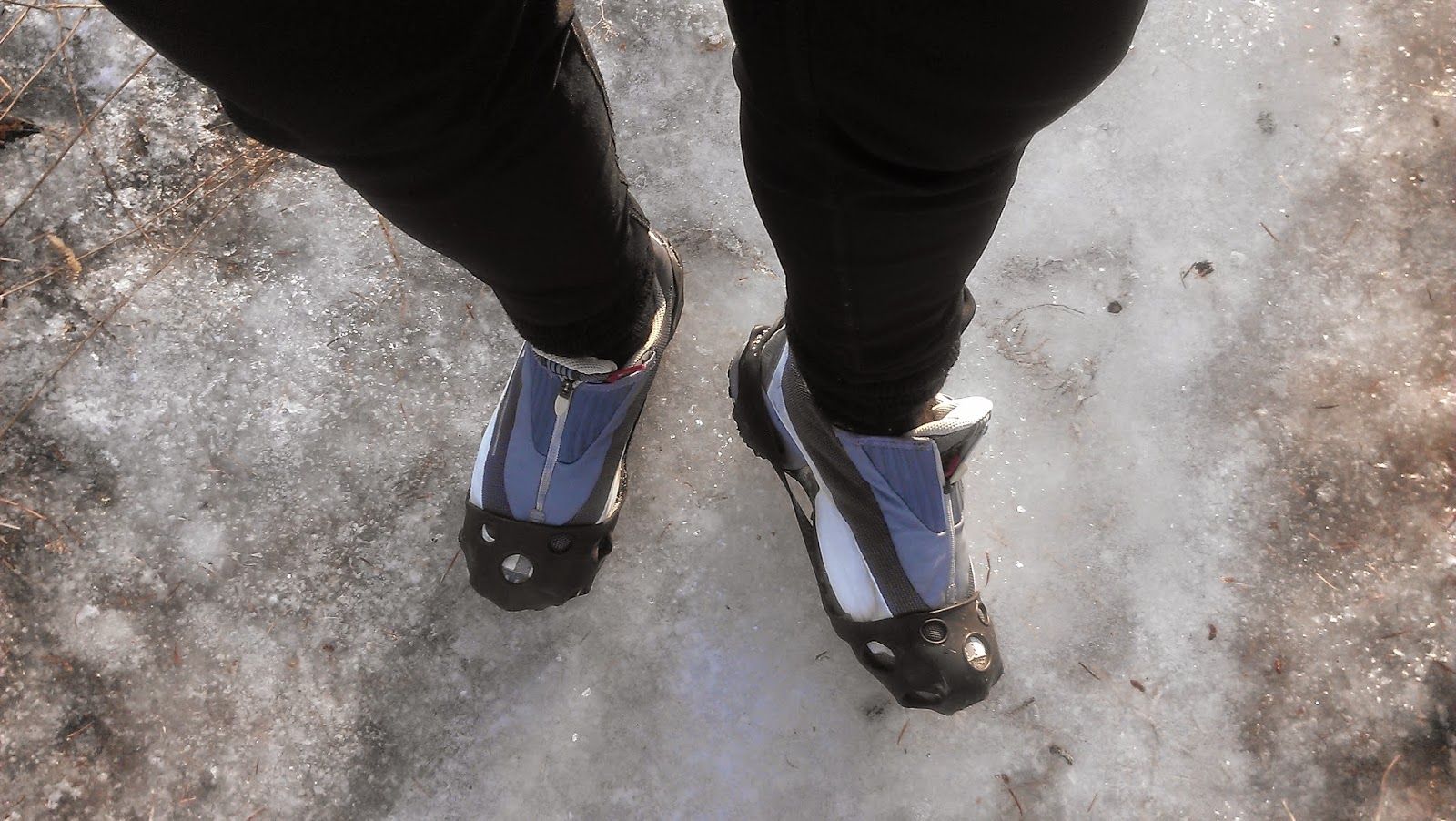