D, J and I started up the trail, billed as the steepest in the park.  We had snowshoes, but left them in the car, banking on the winter's low snowfall.  In most years,  we wouldn't be going to nearly 7500 feet this early, but this wasn't a typical year. 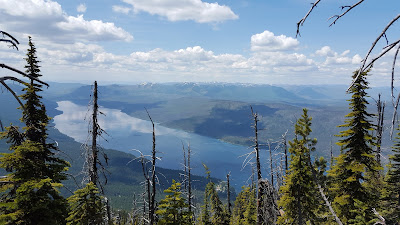 We quickly reeled in a group that had left well before us; over 20 years younger, they looked somewhat intimidated as we bore down on them.  They were headed for a lower elevation lake; we quickly left them behind and began climbing.  The trail was steep, at one point gaining 1000 feet in three quarters of a mile, but not unbearable.  Last year a hiker was charged (he said) by a bear here; he claimed it kept coming despite being blasted by bear spray.  He shot it, to leave it wounded in here somewhere.  The bear was never found.

As we approached the top, a vision approached us in the form of a young man. Bare chested and muscular, with long dark hair flowing down his back and a wide smile, he bounded down the trail toward us. Alas, he was closely followed by his cute girlfriend, and we still had some climbing to do.  Snow patches appeared, and then became continuous.  We abandoned the route and headed straight uphill toward the fire lookout. 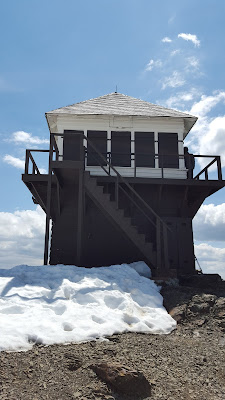 I looked out at a sea of mountains.  The lookout hadn't been staffed in years, but I imagined its former tenant, perhaps carrying a backpack full of fresh vegetables for resupply, cresting the ridge and pausing to count his or her blessings on being paid to live in such beauty. 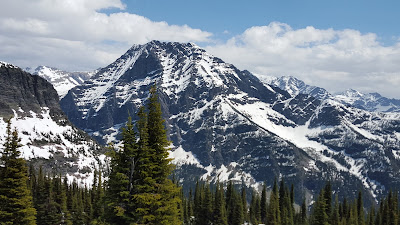 I don't think I'd ever get used to it.  All the miles, the unrelenting steepness of it, would be worth it, every time. 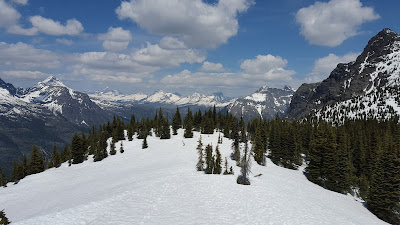