For all the talk of how this was going to be a busy fire season, not much, besides the flurry of activity two weeks ago, has happened yet.  Some engines drive to Michigan only to find an early green-up and rain.  My assistant goes to Michigan also, resigned to two weeks of sitting around with the scooper plane, but gets lucky and draws  the golden ticket:  a reassignment to Alaska.  Another minion flees to a detail in Missoula, gambling that something might happen there.

The rest of us are too busy to worry about it.  The rest of the crew comes on Monday, generating a flurry of paperwork and mandatory training.  There is always a problem child, which isn't as bad as it sounds: usually this person is the one who can't get on the computer and whose documents constantly get lost in the system.  It remains to be seen who it will be this year.

Winter is losing its grip on the high country, but three or more feet of snow still remain above 6500 feet.  J. and D.  and I hike to the top of the ski hill.  We abandon the trail when it becomes snow covered and head for the summit.  Up there, someone has set out two chairs with a view of the peaks over in the park. 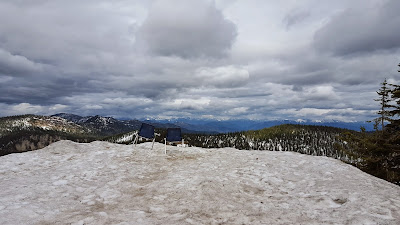 Tomorrow I'll go over there and try to make it up to a fire lookout.  Based on a ranger's trail report, we may run into a lot of snow on the ridge, but we'll go as far as we can.  It'll be busy soon enough.  It's time to go for a hike, or bike ride, or trail run.  It's time to grab these moments while I can.