I'm on fires currently and will write a real post when I can.
Please clear out around your property and be careful with fire! 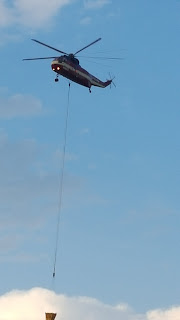 When you climb a mountain in a whiteout, like I did twice in Iceland, you can't see how far you have to go. You can't see where you came from. Everything else falls away, and what you are left with is the glacier underneath your feet, the person in front of you, and the rope that ties you together.

This is your world, for hours.  You walk in the steps of the person in front of you, and because there's nothing to see, you watch the rope in front of you. You want to watch it anyway, because it could save your life. You don't step on it, ever; the sharp points of your crampons could shred it. If you let too much slack accumulate in front of you, you need to slow down. If the person in front of you falls in a crevasse, the fall will be much longer. If the rope is too taut, you are walking too slowly and you need to speed up. You could be pulled into the crevasse too if the rope is too tight. The rope should kiss the snow. You know it when you see it. This means your rope team is walking in sync, is paying attention.

When you climb as a rope team, you are together yet apart. It's hard to talk much because you are spread out evenly. You're in your own bubble, alone with your thoughts.  If you're also climbing in a whiteout, your world becomes even smaller. You think about all kinds of things: the past, the future, what brought you here. But sooner or later it all comes back to your footsteps, the surface of the glacier, and the rope.

Speed up, slow down. Don't step on it.  Move it to the other side when you change directions. This is your lifeline. Remember this.

When it comes time to untie, you know you've made it. There's no more crevasse danger, and it's just a hike now. You can walk next to each other and talk.  You feel a little closer to your companions now. For hours you moved as one up the mountain, a thin line connecting you together.  The rope is gone, but you remain connected by the memory. 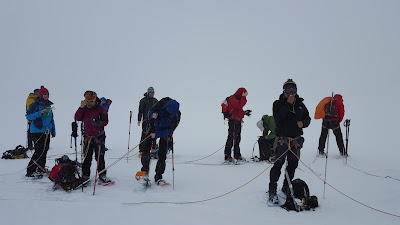 The van rolled into a parking area, waking us from our rain-induced doze.  We looked around: what was here? Oh, another waterfall.

It's hard not to sound blasé, but in Iceland waterfalls are everywhere!  The largest, most spectacular ones have parking lots and trails to them, but there are many, many more pouring anonymously off cliffs, sometimes in the back yard of a farm house.  On a sunny day you can see rainbows in their spray, but even on a rainy day they are amazing.

You could make a whole Iceland trip out of waterfalls, driving and hiking from one to the next.

Here are a few.

Iceland: Into the Blue Lagoon

I shuffled off the plane in Reykjavik, trying not to feel grumpy.  Twenty-four hours of travel never gets easier, no matter how many movies you watch (darn you, Still Alice, for making me sniffle at 4 am).  It was cold, rainy, and windy.  I really just wanted to find my hotel and take a nap.  But I already had a commitment.  The Blue Lagoon was waiting.

The lagoon is a man-made lake created by water from a nearby geothermal plant.  It really is blue, because of the silica in it.  If you've seen pictures of Iceland, you've probably seen it.  Icelanders really don't go there.  Most towns have their own outdoor pools heated by the hot water underground.  The lagoon is expensive and touristy.  But still.  You kind of have to go there.

You don't really swim in the Blue Lagoon.  It's only five feet at the deepest part.  Plus, it will make your hair feel like straw if you get it wet, because of the high mineral content.  Even the swim up bar is really a walk up one.  So you walk around.  You find a place away from other people and sit for awhile.  You put the algae mask on your face that is supposed to make your skin soft, and walk around with it on, looking like some weird zombie.  Nobody cares, because they're all doing the same thing.  Everyone seems happy.

It was still raining and cold, but the water was a hundred degrees.  Soon I would go to the city and meet the strangers I would be climbing with.  But for now, this was the perfect way to start the adventure. 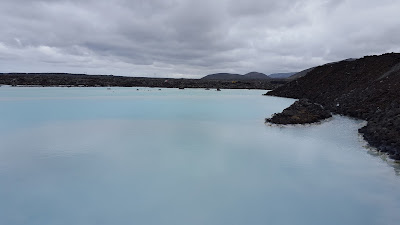 What happens in fire camp....

Even though it was decades ago, I still remember my first sight of a fire camp.  The other rookies and I stared incredulously out of the windows of our transport, a yellow school bus.  A sea of tents filled a field.  Vehicles drove busily back and forth.  There was a caterer, and showers, and even t-shirt vendors, who had hastily created shirts with a fire scene, slapped the current fire's name on it, and now lurked outside the camp boundaries hoping for sales.  The camp housed 3000 people, more than the town we lived in.

Fire camps, set up to house firefighters and support personnel while they are working on an incident, are a strange sight.  They sort of resemble an odd music festival without the bands or illegal substances (well, mostly).  As you'd expect from a temporary city, strange things sometimes go on there.

On my first fire, Teri and I were sleeping under a makeshift hooch, back before tents were issued on a regular basis.  A drunk man in his underwear approached, insisting that we were in his shelter.  "This isn't your crew!" we tried to tell him, but he wasn't buying it.  Eventually he stumbled off to bother someone else.

On another incident, the management team refused to set up showers for women, saying vaguely that they had had "problems" in the past.  Meanwhile, men streamed happily in and out of theirs.  In order to get a shower, women had to trek half a mile across camp to ground support, where if there was a driver available (often there wasn't), they would get driven to a school where apparently there were no "problems."  The joke was on that team though, because the school showers were much better than the ones in camp, and the men on our crew begged to be able to come along with us to use them.

A wedding took place at one camp; apparently the bride was afraid her groom would not return in time to participate in the one that was scheduled, so she tracked him down and married him right there.  That was one determined lady; however I question how committed the groom was, to go on a fire assignment so close to the ceremony.

Fire camp romances are pretty common.  Sometimes they even survive the fire.  The two Gs thought they were being surreptitious when they decided to share accommodations one evening. Alas, they suffered from poor tent placement and oversleeping, emerging together in front of the entire crew as everyone lined up for breakfast.

Working at the helibase, you can sometimes escape the camps and sleep at the helicopter landing area.  While you're sometimes pressed into service to chase cows away from the aircraft since you're often using a farmer's field as a helibase, you also escape the rampant germs that infect most camps, noisy generators, and inconsiderate neighbors.

These days I prefer to stay mobile, so if I get to have a vehicle, I'll search out a spot far away from other campers and sleep in the truck.  This way, I've seen moose ambling along dirt roads, northern lights, and elk crossing rivers, far away from snorers and questionable porta potties.  Then in the morning I can go to fire camp and forage for chocolate milk.  It's the best of both worlds.