Vatnafjoll.  Eyajafjallajokull. Hvannadalshnjukur.  To us non-Icelandic-speaking people, these names looked like someone grabbed a bunch of Scrabble pieces and mashed them all together.  Even when the guides patiently tried to teach us: "For Eya, say I forgot my yogurt, really fast and kind of mumble," it still proved impossible to pronounce the names.  Nevertheless, we were determined to climb them.

On each mountain it was like stepping back into winter.  Rain, snow, and wind of near Patagonian proportions made stopping unappealing.  On Vatnafjoll, a warm up peak, we had to turn around, defeated by the weather, and retreat to hiking trails lower down.

We weren't even supposed to climb Eyajafjallajokull, the volcano made famous by its eruption in 2010 which shut down air travel for awhile.  Our original objective was a smaller peak, but Iceland had a record snow year, and we couldn't get to it.  So Eya it was.  We trudged up the peak in whiteout conditions, in two rope teams: I was following Kamil, a handsome Polish mountain guide, when the clouds suddenly parted to show the summit.  "Be careful here," Kamil said as he kicked steps in the steep snow.  "We're here," he said, stopping, my footsteps the second ones on the top. 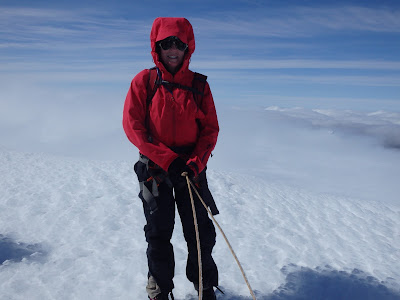 Hvannadalshnjukur, the highest mountain in Iceland, was next.  6921' isn't high for a mountain, but it is when you start near sea level.  I looked down from my hostel bunk at 4 am at my roommates, who were slowly gathering their gear.  It would be over 12 hours before we would return.

Our guides hastily conferred in the parking lot.  "We need to take snowshoes," they decided; we all then had crampons, trekking poles, ice axes, and snowshoes hanging off our packs.  It started to snow as we hiked up the approach trail, keeping a steady pace and reeling in a guided group of guys from New York.  We climbed in a white world, our guide halting at one point in the summit crater to check his GPS.  Climbing in these conditions was strangely disorienting.  At times it was hard to tell if we were actually ascending.  I concentrated on following C., a marathon runner from England, and walked in her footsteps until she stopped walking, and we were on the summit. 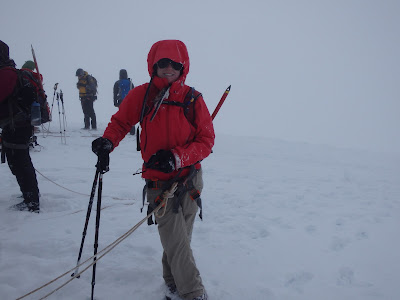 The next day was clear and sunny, and we had the chance to actually see the mountains we climbed.

We gazed at the summits that had been hidden from us while we stood upon them, and we were happy.  Anyone can climb a mountain in the sunshine.  We had climbed them in snow, rain, and wind, and done it faster than most groups.  I had just climbed on my 7th continent.  It was a good day.
Posted by Lynn at 9:09 PM