Sometimes it seems everyone hunts where I live.  Meetings are scheduled to avoid hunting season; people grumble if they have to attend a training class during that time.  Some hikers flee to the national park until the hunters vacate the woods.  But I wanted to take advantage of the unusually long autumn; I grabbed an orange hoody and headed for my favorite hiking area.

It was the second day of the rifle season, and hunters strolled the road wearing blaze orange and toting guns.  However, there were only a few hikers in the parking lot.   None of them wore orange, but I hurried past them, not about to be mistaken for an elk.

The trail I chose climbed quickly to a pass and into a basin studded with lakes.   There was about an inch of new snow. 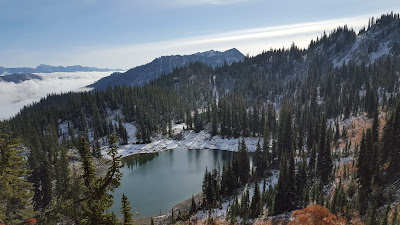 I walked along a ridge above the clouds.  Nobody had come this way, except a few deer. 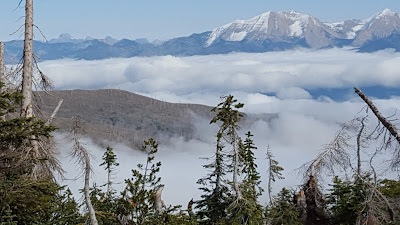 I ended up at Clayton Lake, a quiet, wild place. 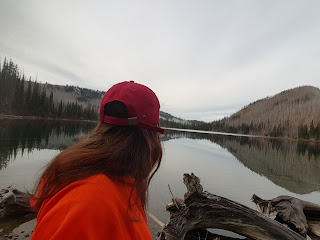 I didn't see any other hikers or hunters in 13 miles.  Snow will settle in this basin soon, keeping out all but the most determined.  The deer and mountain goats will have the lakes to themselves.  Maybe I can sneak up here again before winter takes over.  If not, the trail will be here next summer, waiting.
Posted by Lynn at 8:01 PM