"The helicopter is going to be released at end of shift," I text my minion.  His response is swift: "Happy dance!" he replies.

It's not that we don't like the helicopter, our pilots, or our mechanics.  We love flying and seeing the country from the air.  But we're tired.  It's been almost non-stop for over months, this fire season, and it's not really over yet: there's still fires out there, and our type 1 helicopter got reactivated and sent to Texas.  Days off were few and far between.  I have more overtime than the local hotshot crew does. 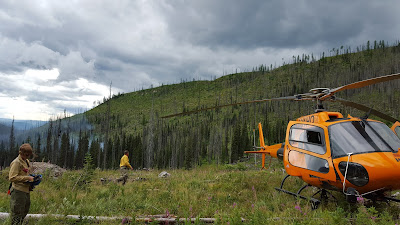 Still, we haven't had widespread rain.  The 80,000 acre fire on the forest, among others, still creeps around.  I wait for someone to say there's been a mistake, as the pilot departs for the last time from the helipad. But it appears that he will make it out of our airspace.  As he has been battling a flu-like illness for three weeks, he is undoubtedly relieved also.  Since we will have a new contract next year, we may not see him or this helicopter again.

Autumn blazes across the mountains.  Sometimes this transition is hard: going from working 10-16 hours a day, seven days a week, to a more normal schedule.  This year it's somewhat overwhelming.  I don't feel like doing much of anything for awhile.  But I do make it to the park before the road closes. 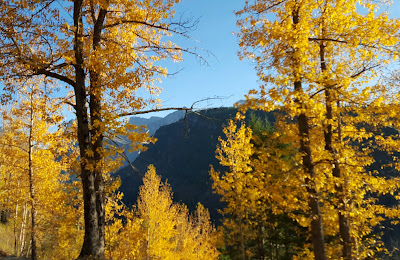 The "experts" are calling for another dry winter.  I gamble and buy a ski pass, because really, who knows.  We could be sitting in the rain staring glumly at the helicopter all next summer.

Change is in the air.  It's time to go out and meet it. 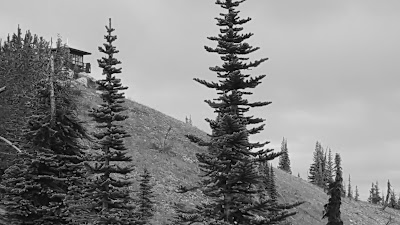