When a ranger said "Code W" on the radio at the Grand Canyon, we employees all knew what it meant.  This stood for "Wimp," a person who was attempting to hike out of the canyon and was mired at one of the rest stops.  The wimp had no medical issues, but felt he or she could not continue.  After being plied with water and snacks and the encouragement of a ranger, these people could usually haul themselves, albeit slowly, out of the canyon without a helicopter rescue.

I stood uncertainly on the trail yesterday, wondering if I was having my own Code W moment.  It wasn't because of the snow that had fallen the night before, or the steepness of the trail.
It was this: 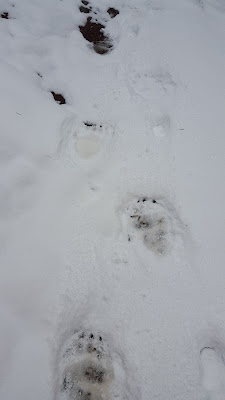 The big bear had marched up the center of the trail, probably only moments before.  My hiking companion and I continued along cautiously, yelling "Hey Bear."  At a curve in the path, we found very fresh tracks where the bear dove off the trail.

We paused.  Where was it?  Undoubtedly it had heard us and left the trail in a hurry.  Was it long gone, or just off the trail in the tangle of vegetation? Would it double back and regain the path behind us? Was it worth it to continue and wonder?  Why hadn't I invited more people along on the hike? Was it silly to turn around?

All of us who live in these mountains know about the bears.  Sometimes we see them like ghosts moving through the forest, but most of the time we just see the evidence of their passing.  We carry bear spray and most of the time we walk through the woods safely.  Still, I've been charged by a bear, and I've known people who have had terrifying encounters that left them scarred mentally and physically.

We decided to leave the lake to the bears that day, and go to another lake that was drenched in sunshine.  Maybe we were "Code W", and maybe not.  At least the big bear probably had a peaceful walk through the snowy woods.  Maybe it stood on the shore of the lake and looked around, unafraid, not quite ready yet to hibernate for the long winter, just wanting to see it all one more time.