There was a lot of chatter this year about Black Friday and stores being open/not open.  It didn't affect me much; I do most of my shopping online (although this can be dangerous and I definitely fell victim to the "that's cute, I want one too!" syndrome).  As a person who has to work a lot of holidays, I can usually be found somewhere far away from any festivities.  But I could get behind the #OptOutside trend.

I think this idea was started by REI, which decided to close their stores on Friday and urged their employees to do something outside instead.  Regardless of its origin, it was a good idea.  Not that I need any urging to opt outside (well, maybe when I lived in Fairbanks and it was -40F I did).

On Black Friday I met my friend B. at a local trailhead.  It was about 20 degrees and a light layer of snow covered the ground.  Her two fluffy dogs raced around, excited.  We walked and talked and then had lunch.  It was low key, but opting outside doesn't have to be an epic adventure every time. It can be just a simple walk with a friend, catching up.
﻿
I can't think of a time when, after being outside, I was sorry about it.  Of course, sometimes DURING it, I had some regrets: the time I went running during a tornado watch, or when a grizzly bear huffed at me from some huckleberry bushes.  Afterwards though, there is usually something that made it worth it, at least a good story.

We shouldn't have hashtags and stores reminding us to go outside.  Let's just go! 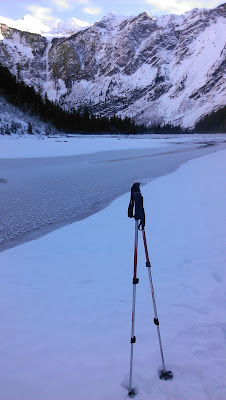