Stress and the City

Confession:  I don't do well in cities.  I know a lot of people love them, but surround me with acres of concrete and traffic, and I soon start looking for a way out.  But when work is paying you to go somewhere that is 85 degrees in the middle of winter, it's best not to ask too many questions.

We spent the week sequestered in a conference room for 10 hours a day.  The discussions became heated  at times.  Some key participants neglected to mention in advance that they had booked return tickets for Thursday, leaving some of us missionless on the last day. Without a car, I tagged along with some other people in theirs.  I looked longingly at the hills in the distance, but they were out of reach.

I made the best of it.  We ate at taco buses and hole-in-the-wall places that had incredibly cheap and fresh food.  Not wanting to run with traffic, I exercised in the hotel workout room.  I jumped in the pool.
At loose ends the last morning, we visited another crew's base and looked enviously at their shorts and flip flops.  The two guys debated: where to next?  "I want to see some PRETTY SCENERY," I said vaguely, tired of gas stations and freeways.  Resigning myself to being overruled by the presence of a nearby air and space museum, I was silently happy to see a long line outside of it caused by the fortuitous arrival of a tour bus.  We changed gears and headed for a canyon on the edge of town.

The parking lot was full and we didn't have much time, but I almost skipped down the trail.  I was out of the city!  The desert opened up before me.  I wanted to hike all the trails and climb to the top of the mountains.
There wasn't time for that, though; we had to return to the city and fly home.  That hour I spent in the desert canyon made the long meetings and contentious debate fade away.  I felt alive again. 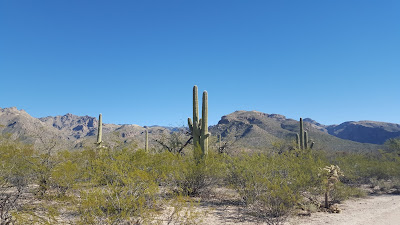