I heart the library

Long ago, I decided that any town I lived in would have to have two things: a gym and a library.  However, I sometimes found myself living in places without either one.  The gym problem was solved by buying dumbbells and a rickety bench, but the library issue wasn't so easily fixed.  I had to resort to scrounging giveaway book shelves or begging friends for their already-read books.  I discovered to my delight that one remote ranger station was visited every two weeks by a bookmobile.  On the day it was supposed to arrive, I would peer out the window impatiently until it rolled into view. The selection was limited, so I had to be quick to beat the other residents to the new books.

Some of the places I've lived had small libraries, basically one room, skewed heavily towards romance novels and detective stories.  One sponsored an annual poetry contest, which I won two years in a row but was banned from winning after that, despite the contest being allegedly anonymous, because it would supposedly discourage other writers.  Others seemed to be mostly used by people who didn't have computers at home, with the stacks deserted.  The quiet "library voice," like the "restaurant voice" of my childhood, seems to be a thing of the past.

Now I have a Kindle, so I never run out of books. It has traveled with me on fire assignments and to places like Antarctica and Patagonia.  I don't technically need the library anymore. But I still go there, because where else can you take something from a place, keep it for a few weeks, and bring it back, completely free?

And I discover that some things never change. The librarian still looks skeptical at the number of two week books that I have, just like when I was a child and would take out as many books as I was allowed. I still feel nerdily excited about the prospect of reading what I picked out. I wouldn't give up my Kindle, because it makes travel so much easier, but I'll always love the library. 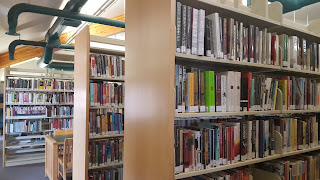 Adventures are great.  New places, new people, not quite knowing if it will work out.  But everyone needs something reliable, whether it's a running route, gym routine, or hike.  Sometimes you just don't want to wonder if you can drive to the trailhead, find the lake, or if there are hazards you haven't considered.  Enter the Old Standby.

There was too much snow at the trailhead to park there, so I put on my snowshoes by the railroad tracks.  I could see that people had been there before me, on skis and snowshoes and on foot, which is one of the reasons this is my Old Standby: while it's never busy, I can usually count on someone else breaking trail. 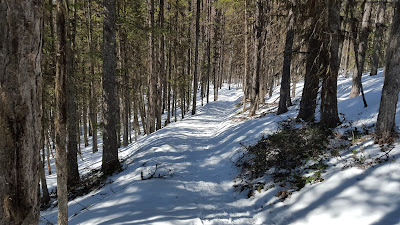 The trail is short and gets into the wilderness in about a mile.  It doesn't take long after that, and this amazing lake comes into view.
It's impossible to be disappointed here.  The trail is easy.  The lake is reliably beautiful, no matter the weather.  Because it's a short hike, if you forget something, it's not a disaster.  You can get up here when you are short on time, have visitors in tow, or aren't sure what you feel like doing that day.  I've never seen an unhappy person here.  How could you be? 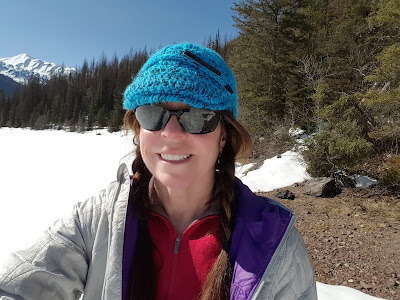 Nobody was on the trail or at the lake.  I sat in the sunshine, looking at the mountains. Back at the parking area, two men were starting out on skis.  Maybe this was their Old Standby too. 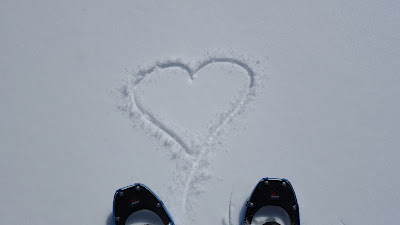 You Should...Stay in a Fire Lookout!

Anyone who has read this blog for awhile knows that I love fire lookouts.  There's something about a tower or cabin perched on top of a mountain, especially one that has been there for 50 years or so, surviving harsh winters and threatened by wildfires, but still surviving.  I stay in them whenever I can.
I've even had some opportunities to work in them, filling in for the regular fire watchers.  I've spotted new fires and called them in, as well as monitoring ongoing ones.
If you live in the West, or visit a mountain state, you can rent a fire lookout and spend the night on top of a mountain, just you and the stars!
Fire lookouts can be rented in California, Idaho, Montana, Colorado, Oregon, Wyoming, and Washington. Fees range from $25 to $50 a night.  You'll have to bring food, water, cooking supplies and bedding; basically all backpacking supplies except the tent.  Some lookouts require a short hike, but you can drive to a lot of them.
What to do while you're there? Hike nearby trails.  Find the water source (there usually is one) and think about past lookouts having to haul their drinking water up the hill (it's always up hill).  Read a book, drink tea, look for fires! At night, watch the stars and imagine what it would be like to live there all summer.  If you're lucky, a storm might roll in.  Storms are amazing from fire lookouts!
Anyone can stay in a hotel.  Why not try something different?  You won't regret it. 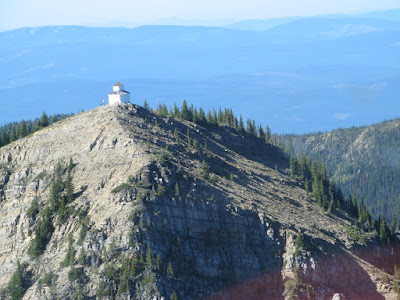 Greetings from the germ factory

"Carrier monkey." It's a term we use a lot on my fire crew.  It means someone who has been exposed to illness, but is not yet showing symptoms; nevertheless they are wildly contagious.  Carrier monkeys are the worst, because they don't know they're sick, and you can't really blame them for infecting you.  They didn't know!

I recently encountered a carrier monkey and contracted the flu, only a couple of weeks after I had a stomach bug.  To top if off, my knee hurt for no specific reason.  "I'm falling apart!" I whined to a friend.  Pity, party of one.

I've always been someone who tried to exercise through anything (probably prolonging illnesses in the past), but I had to reluctantly take some days off.  I realized this when I got on my exercise bike and my lungs started burning immediately in protest. I huddled under blankets and tried to concentrate on a work-related online class about the Davis-Bacon Act.  As it turns out, a fever makes it difficult to remember policies for a test. Friends offered to bring me medicine and food, but I knew what I had to do: quarantine myself.

Being sick makes you appreciate feeling well even more.  To anyone I may have infected while in carrier monkey status, I sincerely apologize.  You should feel better in about 6 days. 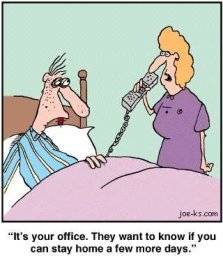 My friend J. wanted popcorn for the movies, or else I probably wouldn't have run into C.  I hadn't seen him for a few years, since before he retired.  Wildland firefighters are forced to retire earlier than most Americans; you're out by 57.  This can be great if you're prepared for it, not so much if you don't have enough saved and have to look for some other way to pay the bills.  C., standing in the concession line, didn't seem worried.

"Retirement is the best career I've ever had," he declared.  "If you get to the point where you can retire, I highly recommend it."

Earlier this year, I rode the ski bus with a lively bunch of senior citizens.  They were all retired; apparently they ride the bus to the resort, ski for half the day, and then go home to do whatever else they please.  Although I don't want to hurry time, I felt a little jealous.

What to do if you're too young to retire? Practice, of course! Every once in awhile (not enough), I take a day off midweek.  In the winter, it's usually to snowboard without the weekend crowds.  In the summer, it's to hike or scramble up a peak.

Ski runs and hiking trails are quieter in the middle of the week.  You can take advantage of the best weather, if it falls on a Wednesday.  You can get a sense of what it would be like to be able to do this all the time.

Of course, there's lots of reasons not to do this, a busy fire season, meetings, or conference calls just being a few.  But nobody is indispensable.  The trails are calling. Get out there and practice. 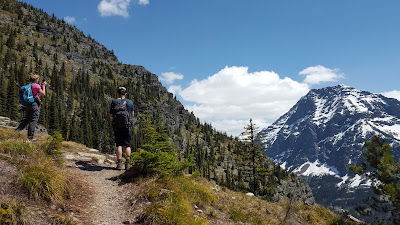