Welcome to the Scrounge Patrol

My ears perked up as Deb described the weight machine sitting in her neighbor's driveway.  "There's a sign on it that says Free," she said.

Free? This sounded like a job for the scrounge patrol!

Some people think that because firefighting costs so much fire crews have large budgets.  This is generally not the case.  And fire gear is expensive.  A single pair of fire pants costs over $200.  This doesn't leave a lot of room for extras.

Not having a kitchen, and often spending 10-16 hungry hours at the base, we rescued a barbecue grill from the dump.  People bring their unwanted items from home: a mini-fridge, a rototiller for the garden.  The hotshot superintendent lent us his dumbbell collection, with the caveat that we couldn't lose or abuse it: every time he walks through the hangar he looks suspiciously at the rack, making sure none are missing.  The crew does most of the base improvements, welding a saw cage, spreading gravel, and digging trenches for a new phone line, to save money.  We eye anything abandoned or unused, sizing it up for potential.

We sped out to the location of the weight machine, hijacking the weeds guy and his trailer.  Sure enough, there it was, in working order and still free.  We quickly loaded it up before the homeowner could change his mind.  On the way back the weeds guy decided he didn't want his treadmill, so we took that too, rolling down the road with a mini gym on the trailer.

New fire pants can wear out in a single season. Some of the things we build or find will last many years.  Ride on, Scrounge Patrol! 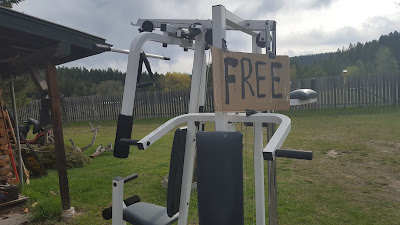 I'll meet you in the desert

I gaze at the reason I traveled all the way to New Mexico, enduring multi-hour travel delays and cancelled flights.  We will only have two hours together, and I'm uncertain.  So far, though, I like what I see.  Dark, sleek, and obviously capable, the object of my attention waits patiently in the desert sun.  In a few months we will spend hours together. 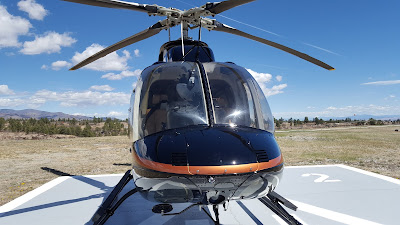 Our new helicopter has just come on contract and I'm here to see it.  It will work here until July and then fly off to us.  We are unsure: we have had the same type of aircraft for many years, and this one is different.  We are used to where we put our stuff, where we all sit.  We have had the same pilot for about nine years.  But ready or not, it's time for a change.

The New Mexico crew, wearing fire clothes, optimistically swarms the helicopter with their gear, although rain is forecast.  The company representatives hand out business cards.  I gaze at the helicopter again before I leave to go back to the mountains.

It's a strange relationship we have.  We have to trust each other, the crew, the pilot, and the machine, although we have never met.  Soon we will know each other well.  There will be early mornings and late nights, the smell of smoke and the sight of flames in the trees.  Soon we will feel like we have always known each other.

Fire in the wilderness

It's early. Most of us haven't even taken our yearly fitness test yet.  But it's out there, someone's campfire, abandoned in the wilderness.  Fifty people are fighting it, digging fireline and protecting a cabin. 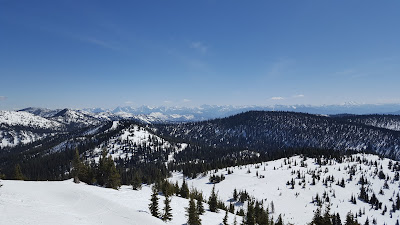 It was closing weekend.  I met a friend at my favorite lift and did a few runs; the snow was getting sparse in spots, but the sun was out.  Costumes were all over the mountain; some people skied in shorts.  As I sat next to the run looking at the mountains, a curious grouse approached. 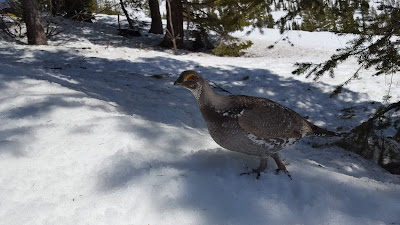 That's cute, I thought, watching it circle me.  Some people looked down from the lift. "There's a grouse behind you," one of them said helpfully.  Suddenly it flew at me in a fury, making a demented noise.  It appeared to be time to move on.

The early fires smolder in the hills.  Maybe they are a sign of a busy fire season to come, maybe not.  Maybe it will rain all summer.  Although we are armed with long term forecasts and maps of drought, nobody really knows for sure.

I don't stick around for last chair.  See you next winter, aggressive grouse! We'll do our best to make sure your home stays safe.

SPRING IS HERE! Sorry for yelling, but it's supposed to be almost 80 degrees tomorrow. Eighty, people!

The burn plan I wrote is useless; the grass in the burn unit turned green almost overnight.  Other people are burning though; aggressive columns rise from somewhere on the adjacent forest.  The temporary employees start in a month.  A month!  We start seriously planning the training schedule and shuffle through their folders, looking for missing documentation. I send them a flurry of emails, half of which they probably ignore.

But first, I had to visit winter one more time.  Dressed in ski gear, I drove up to the hill, passing people wearing shorts and flip flops.  The trip to the snow only took about 20 minutes.  The runs were empty.  There were no lift lines, and by that I mean no people in line at all.
There are some bare patches showing next to the runs, and a few twigs uncovered in spots.  My insulated jacket is too warm. Winter is leaving, and fire season is just around the corner, whether we are ready or not.

The relief of not having to

I see it in the seasonal employees first. Although they only work a few months, by about month four many of them are over it. There is talk about off-season travel. The fateful words, "I can't wait to be laid off," are even uttered.  They love fighting fire, but by October they are ready to be done.

My local ski area closes in a week. There's still enough snow, but because it operates on Forest Service leased land, the season is always over in early April because of grizzly bears, who live in the area and need to roam in peace. I'm not sad about it.

I won't have to check the snow report. Uh oh, "grooming irregularities!" I won't have to worry about whether I'll get blocked in when parking. I can put my snowboards away for the winter knowing I put in a good effort and now it's time for something else.

As much as I like trail running, sometimes there are days when the snow is deep or the woods are a muddy mess, and I'm pretty much OK with bailing on it and going to the gym instead.  When I start freezing while riding my bike in the fall, I put it in the garage without feeling guilty.

There's sometimes a relief when you don't have to do something, even if you really like it. I used to only run. I ran every day. I was obsessed with running. But after awhile, I stopped enjoying it. It became an obligation, not something fun. It was only when I started doing other activities more, like hiking or going to the gym, that I enjoyed running again.

Winter is over. It was 70 degrees here today. Snowboards and snowshoes will hang out in the garage till next year. And that's a good thing, because there are trails and mountains waiting to be explored.