Don't get me wrong, I can sleep about anywhere and I have: on crew buggies headed for fires, at high mountain base camps, on a ship wallowing through waves in the Drake Passage, and in a bivy bag on the shore in Antarctica, to name a few.  But if I have a choice, I've realized I can actually be somewhat (gasp!) picky about where I sleep.

I sighed when I realized where my fire assignment was this time.  Loud trains rattle by at all hours in this place; there's really no escaping them. I knew I would have to choose wisely.

Fire camp was out.  Not only are fire camps usually a hotbed of sickness ('camp crud" runs rampant), but there are generators, bright lights, cell phone talkers, and a bastion of snorers who seem to always plunk their tent right next door.  Plus, camp was half an hour's drive away from the helibase on a highway rife with kamikaze deer.  The helibase seemed logical, if it weren't for the aforementioned trains (22 a day, the district ranger gleefully informed us), and a particularly annoying airport beacon. There was also a local dog that barked all night as if it was its job.  A campsite recon was required.

A site high on a bluff had potential, but was inhabited by cows and was even closer to the train.  I drove down another dirt road and found a free campground.  Green and quiet, it was a paradise with a creek running through it.  I happily settled in.
However, when I went back the next night, other people had moved in.  A man with seemingly all his possessions piled in the back of  a decrepit car eyed me suspiciously through an aggressive campfire.  It wasn't the same;  the magic was gone.  I dejectedly left.  Back to the helibase it was.

I experimented with a few things.  I found that a person 5"5" or under CAN sleep in the back of a Ford Escape; however there is a daunting ridge that must be padded with clothes, tent bags, or anything at hand.  I discovered that putting up my tent behind the mechanic trailer blocked the beacon.  As for the trains, the noisiest one came by at about 10:30; after that they were somewhat bearable.

Best of all, staying there allowed more time for running on the trails I found and for a refreshing jump in the river.  So while I didn't find that campsite that was "just right," it was tolerable.  A camping Goldilocks like me could live with it. 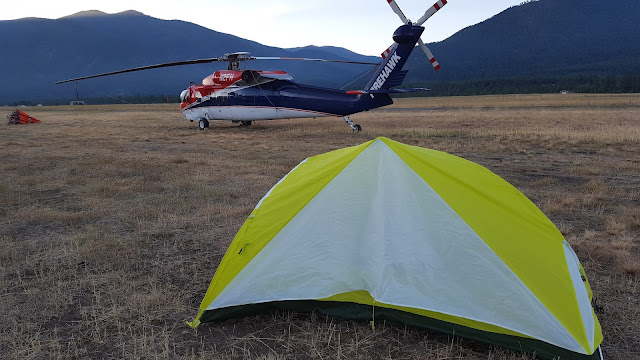