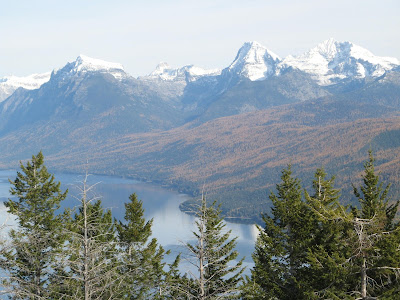 I hiked down the trail, singing loudly:

The other day, I met a bear,
a great big bear,
away up there.

Anybody besides me know that song?  I'm not sure where I learned it, but it seemed appropriate.  A few minutes earlier, I had my hand on the trigger of my bear spray, waiting for the angry/frightened bear that was thrashing in the brush to come boiling out of the woods.

When I arrived at the trailhead, the parking area was full of cars.  I've never worried about hiking here, because of the number of people usually there, and because this area is not known for bears, at least not as much as the nearby park.  I decided to meander toward my favorite lake in the area. 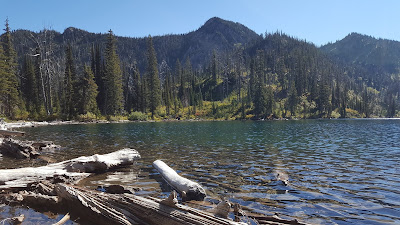 Only a few huckleberries clung to the bushes.  There were still patches of snow in the shade from the last storm, but it was sunny and quiet at the lakes I passed. 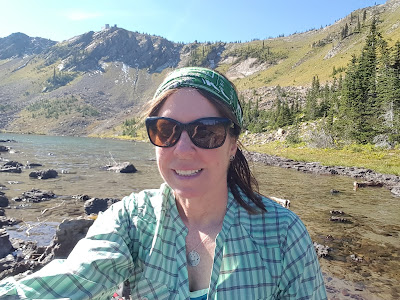 I decided to take a trail I had never hiked before to get back to the trailhead.  "Hey Bear," I yelled intermittently, but not seriously.  There was no bear sign anywhere.

Suddenly, I heard a snort from the woods, then crashing through the brush.  A bear! I couldn't see through the woods well enough to see what kind it was, but it sounded mad, huffing in an unmistakable way.  The crashing grew closer.  It wasn't running away.

"Go away Bear," I yelled, still walking.  "Lots of people here, with bear spray!" I took the safety off my lone can of repellent. The bear continued to thrash through the brush.  It sounded like it was running back and forth, trying to decide whether to come out.

I felt strangely calm.  This is it, I thought, scanning for trees I could climb.  None looked probable.  At any second I expected the bear to come leaping out of the woods.  I kept walking and yelling.

It worked.  Nervously I continued down the trail.

At the trailhead, I encountered the wilderness ranger packing up his cabin for the season.  "In the heat of the summer the bears aren't really in here," he said. "But this time of year..." A couple had recently been charged by a sow with a cub at one of the lakes.

It was a good reminder.  We live with bears here.  There are more of them now than ever, and they are being seen in places where they haven't been seen before.  They are coming into town and staying in the valleys.  They are moving out onto the plains.

The last verse of the song is:

That's all there is,
There ain't no more,
unless I see
that bear once more!

Bear, no offense, but I hope I don't see you again.  I'll be making lots of noise so I don't scare you, and dragging some people along with me next time.  It's almost time to hibernate.  Winter well.

I sat in the fire planning meeting, listening to the usual chatter.  Operations, Air Operations (me), Safety, Logistics and Finance all got up and talked.  Night shift, helicopters being released, bears in the area, supplies being ordered, turn in your time sheet!  After several days on the fire, nothing was really new, until..."Sharon Stone's sister wants to do something nice for the firefighters," Information was saying.  "She wants to buy them ice cream!"

Apparently Sharon Stone's sister lives in the area and felt grateful for our efforts.  By the way, how would you like to go through life being referred to as Sharon Stone's sister? ( Her name is Kelly).  Sure enough, boxes of ice cream bars showed up the next day.  While some of us were disappointed that Sharon didn't make an appearance, even more disconcerting than this was that some of the younger firefighters didn't know who she was.  "Who's Sharon Stone?" they asked innocently while munching on Dilly bars.

Sometimes, like grizzly bears, celebrities are attracted to fires.  Arnold Schwarzenegger showed up at fire camp once and addressed the crowd at morning briefing, mostly about climate change.  The public information officers buzzed around like bees.  "No pictures of Arnold! No social media! His people need to approve all photos," they insisted, as everyone took pictures and immediately posted them on social media.
Mostly, I see famous people in passing.  A mechanic and I waited in a hotel lobby for our usually prompt pilot, when a shortish man charged out of the elevator and strode to the front desk.  We looked at each other.  "Mel Gibson!" we whispered.  Joining us, the pilot refused to believe us.  "Where is he then?" he demanded.  The mechanic pointed out the door, where a red Pathfinder had just pulled up with Mel behind the wheel.  He stared at us, probably thinking, who ARE these weirdos?  The pilot was overjoyed to see that Mel and his entourage were also at the airport, congregating at a private jet near where our helicopter was parked.  Deciding to say hello, he marched in their direction, but lost his nerve as he drew closer, veering off in an odd tangent and then returning, chagrined.

Sometimes I don't even recognize them.  Many years ago, a middle aged man brushed past me at a small airport on his way to a flight lesson.  "That was Harrison Ford," my pilot said.  "No WAY," I responded, but turned around to look.  Sure enough, it was.  However, like my coworker who this year became tongue-tied when Gwen Stefani said hi to him, I couldn't think of anything to say.  Then he met Calista, and my opportunity was lost.  Darn you, Ally McBeal!

We often save their houses and their communities, and though we don't see them that often, I'm sure they appreciate it.  Thanks for the ice cream, Kelly! We'll keep doing what we do, with or without it, but it's nice to know you thought of us.
Posted by Lynn at 9:15 PM 6 comments: