The pilot and I looked at each other, unable to believe our luck.  "This is the best work day of the summer!" we decided.

On the surface, it didn't sound too great. I almost skipped it, because I have plenty of employees who could do this mission.  And our cargo was definitely not glamorous...flying a deconstructed outhouse and years of human poop out of a backcountry campsite.

But.  Anytime you get to land a helicopter in Glacier National Park is worth doing.  And when it's in a spectacular cirque called Hole in the Wall Basin, well...you'd be a fool not to go, regardless of cargo. 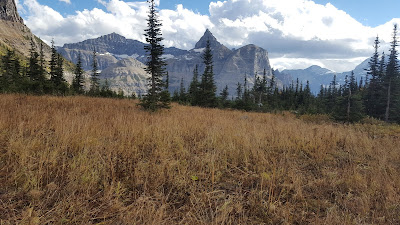 I backpacked to this campsite years ago.  It is surrounded by waterfalls cascading down the cliffs.  We cooked a gourmet dinner on a camp stove and climbed up to viewpoint to see the sunset.  Peering down, I spied a mountain goat strolling into our campsite.  It grabbed my sweaty shorts off a branch where they were drying and ran off, wanting to chomp on the salt.  Luckily, some other campers headed it off and it dropped the shorts.

Now, we set up the helicopter landing site at the foot of a lake.  Kayakers looked bemused as the helicopter went back and forth over the mountains carrying building pieces and barrels. 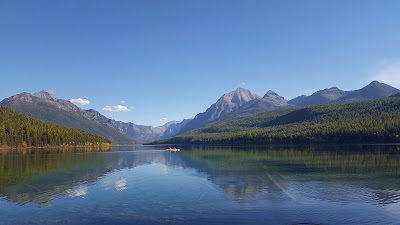 I jumped in the front seat, displacing one of my minions on the mission.  He got to see the basin the day before, and being the boss does have some perks.  We were headed to the campsite to pick up the crew that had to pack up the outhouse and its cargo.  As we settled into the basin, I expected to see a group of 20-somethings who had been pressed into the stinky project.  But instead, the average age of the workers was around 50.  I got the impression that they volunteered for the duty. 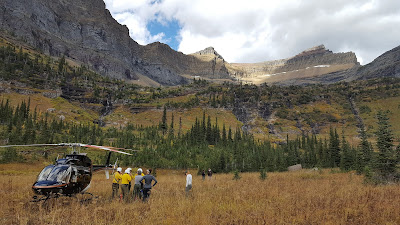 And really, why wouldn't you? 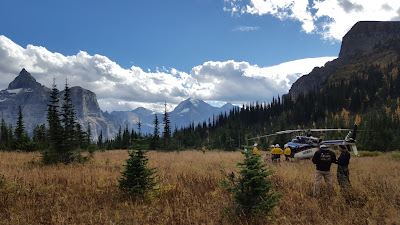 The crew happily bounced around the meadow, taking pictures of the helicopter.  The pilot and I took our own, looking around in disbelief.  This was it, the almost-last mission of the summer, to a place that made it all worth it. Soon the helicopter would leave for the winter, and snow would cover this valley, leaving it to the goats and bears.  We were lucky to have been there, if only for a brief moment. 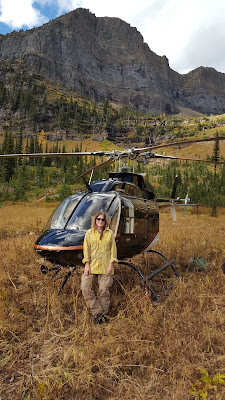