Today is the 13th anniversary of a helicopter crash.  Not a fatal one, at least not then, although I think that one of the passengers might still be alive today if he hadn't been there, sitting in the front seat.  I don't talk about it a lot, partly because I've known so many people who didn't make it through their own crashes, or who were forever physically and mentally changed afterwards.  "What's the big deal, nobody died," somebody once said to me.  It's hard to explain.  How do you explain the impact of this, when you and the others are up walking around, looking just fine? 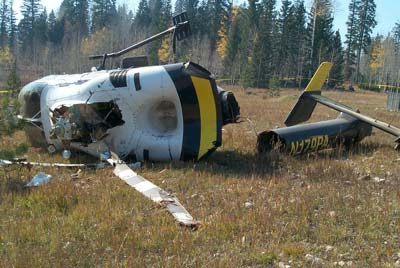 But sometimes I do talk about it, because my crews want to know, and there are lessons they can learn from it: the importance of training for disaster, so your actions are second nature when it does happen, and why every person on every flight needs to have a purpose, no joyrides allowed.  When I talk about it, I usually don't know what people are thinking.  Maybe they are thinking what's the big deal, or maybe I'm not sure I want this job now. Sometimes it's hard to tell.

This summer there was a fire close to the crash site; so close that fire camp was only a quarter mile away.  The hotshot crew from my forest was there.  They had heard my story but that wasn't the end of it.

The 20 men and women drove to the crash site.  They lined out in a row as if they were looking for smokes on the fire, and gridded through the meadow.  But instead of embers, they looked for pieces of wreckage.  They found over a hundred, tiny particles of paint and metal and honeycomb, after 13 years still lying in the grass where they had come to rest. 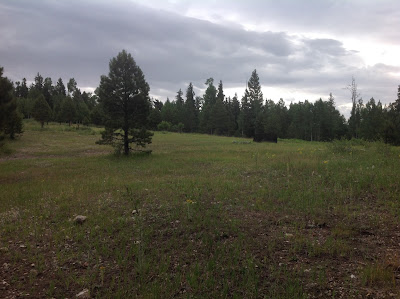 The crew took them home.  From the wreckage they created a piece of art for me.

This is one of the most thoughtful gifts I have ever received.  I hung it on my wall, where I see it every day.  The past thirteen years haven't all been good, but not everyone gets a second chance. Or has friends like these.
Posted by Lynn at 2:34 PM