It's been cold here.  Not Fairbanks cold, although Fairbanks seems to have gotten warmer than it was when I lived there; I don't see the regular -40F temperatures that I suffered through being recorded regularly now.  Here, it's been below zero and windy for quite some time.

The other day I looked glumly out the window.  It wasn't snowing, but it was a few degrees below zero with a brisk wind.  Apparently the wind chill made it feel like -15.  Gym day, I thought.  Then I caught myself.

What was this wimpiness? Retreating to the soulless treadmill when it got a little tough? Had I lost  my edge? Gotten soft?

I started running during what was called a "running boom," decades ago.  The sports bra (called the JogBra!) had just been invented.  Spandex for running was a few years off; people trotted down the road in sweats, or shorts over long johns when it was cold.  There were no yak trax or spikes; we ran on ice and sometimes we fell.  I didn't know anyone who ran on a treadmill.  We ran in howling winds, deep snow, and ice storms.  We suffered, but we felt really good about it.

I'd like to think that I haven't changed that much.  I don't want to be a person who used to charge hard at life but then gradually gave up and sought the easier path.

I put on expedition weight capilene, top and bottom, and attached my spikes to my running shoes.  I put on gloves, pulled a balaclava over my head, and headed for the woods.

The wind cut through my layers.  Although the dog walkers had made a valiant effort to pack down the trails, there is an area that always drifts over.  People had postholed and made the trail a mess in places.  The homemade mountain bike jumps were buried and had to be climbed over.  My pace was slow.  Nobody else was around.  But I was out there.

I thought about the young girl I had been, running on ice and snow and during a tornado watch once (I don't recommend this).  She didn't debate whether to go or not.  She just went.

I think she would have looked at me and said, "It's really not that cold out," and run off, much faster than I do now, expecting her decades-older self to make the same decision.  To just get out there.  To just go. 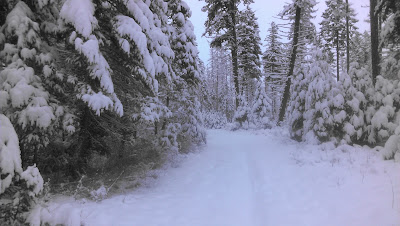