My friends and I compare notes.  Runner's knee. An aching hamstring and sore hip.  Tennis elbow.  A mysterious pulled muscle in the back of the shoulder.  We talk about skipping runs for the elliptical, and avoiding certain weight exercises for awhile.  We joke about getting old, but we wouldn't have these aches and pains if we sat on the couch.

Over twenty-five years ago, Bonnie sat under the visqueen that was keeping our sleeping bags and fire packs semi-dry from the torrential rain that had already put our fire out.  She was talking about why she had taken a job mentoring kids in the Youth Conservation Corps.

"I want them to know that even though I'm thirty, I can still do everything," she said, meaning building trails and fighting fire.  Younger than she was, we nodded solemnly. It made sense. We all knew people who, as the years went by, just decided they were old.  Their backs and knees would inevitably hurt.  They stopped doing things.

Thirty isn't considered old anymore except by some millennials who don't know any better.  And I'm happy to see that there are a lot of people out there like my friends, who are still getting after it.  When I'm picking berries on a certain mountain trail,  there seems to be a steady stream of men in their 60s and 70s running up the steep path to the summit.  Senior citizens chase the vertical at the ski area.  Gray haired hikers are all over the woods.

As a firefighter, I can usually still keep up with the 21 year olds, but I have to be smarter.  Some of these guys can play computer games and eat chips all winter and start running again two weeks before the season starts, but I can't.  I have to keep going.  If they feel a twinge of pain, they push through it, whereas I have to analyze: what's wrong now? maybe I should ride a bike today instead of run.  I pack lighter than they do, preferring to suffer by sleeping a little colder and eating less food rather than packing 55 pounds in my fire pack through the woods along with everything else we have to carry.

So we discuss our aches and pains, but we know we came by them because we're out there running, hiking, and snowboarding.  We're not planning on stopping anytime soon.  So if you see us on the trail, packing bear spray and wearing hiking skirts (except the guys), you better get to stepping, or we'll be passing you.  See you out there! 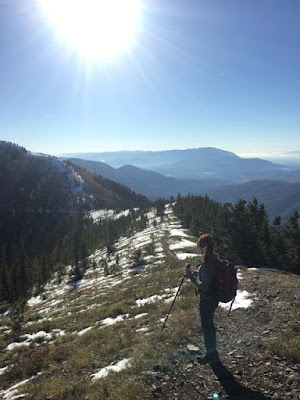