We're all the same on the trail

This weekend I got to hike with both generations.  On Saturday, I met up with some women in my hiking group.  I hadn't ever met them, but most of them turned out to be around my age.  We laughed and talked all the way to an unmanned fire lookout in the park.  It didn't hurt that it seemed to be Hot Guy Hiking Day...each one coming down the trail was cuter than the next, culminating in one we called "Captain America," who strode around the peak with perfect hair and a movie star face.
On Monday, I joined a group of millennials for a hike to another lookout.  Some were my employees, and may or may not have been apprehensive to hike with "the boss." Still, we hiked along companionably, abandoning the trail in deep snow and heading straight up, picking up two young women on the way who had turned around after seeing bear tracks, convincing them to come with us. 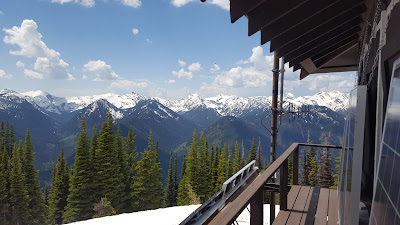 Each group was at different stages in their lives.  The first group talked about their kids and places they had traveled.  The second group, young enough to be my kids, talked about places they wanted to go and jobs they wanted to get.  Despite that, they were similar where it counted.  We were all amazed by the mountains.  We all watched out for each other on the trail.  We talked and laughed and told stories.  We wondered about peak names and flowers.  We were all happy to be out on the trail.

We really aren't so different.  Maybe we just need to go hiking together more.
Posted by Lynn at 9:27 PM 10 comments:

Hike with me (please!)

As I drove toward the trailhead, I felt optimistic.  Yes, there are bears everywhere around here, but the trail traverses fairly open terrain, burned in a fire over 10 years ago.  I hiked it by myself last year and didn't even see bear tracks.  The people I had tried to get to come hiking today were sleepy and didn't want to commit.  Still, I had bear spray and could yell "Hey Bear" with the best of them.  Seeing one was pretty unlikely...right?

Some vehicles were stopped in the middle of the road.  This can be pretty typical national park behavior.  Like in Walmart parking lots, people sometimes forget basic driving skills when they enter a park.  However, the people in the cars were gazing intently into the woods.  Memories of my former career as a park ranger began to surface.  This could only be one thing: a bear jam!

Sure enough, a cinnamon colored bear was eating happily a few feet from the road.  Rudely interrupted by the cars, it loped off into the woods, leaving me to continue uneasily toward the trailhead.  Was this a sign? Would my hike be overrun by bears?

Gathering my gear, I spied a woman preparing to set off on the trail.  "Do you want to hike together?" I asked, ambushing her.  In effect, this really gave her no choice unless she wanted to come across as kind of mean.  Luckily, she turned out to be easy going and seemed happy to have a companion.

A. was training to climb Mt. Adams; although the trail gained more than a thousand feet a mile, she moved out rapidly, not bothered by little rolling rocks and snowfields.  We discovered we had worked in some of the same places; she had been a firefighter in the past.  I had found a new hiking buddy!

I don't think you can ever have too many hiking buddies.  My schedule is erratic in the summer, making meetups difficult.  Trail friends go on vacations, have obligations, or get injured.  It's always good to have plenty of people who can join a hike, especially in bear country (four is supposed to be an optimal group size).

We paused at the top, the site of an old fire lookout, before the downhill slog.  Glacier lilies dotted the hillside.  The peaks in the park were still coated in white, but winter had lost its grip at last.  Fire season will be late here, but I don't mind.  After thirty years of fighting fire, I'll take the mountains and trails (and new friends) instead.

how to be found

We just finished a six day search for a lost hiker.  She was found alive and well, but this is unusual.  I've never found a living person in a search before.  During the week, I often thought of younger me.
Younger me, a free spirit, traipsed solo around national parks and forests, usually foregoing essentials like fire starter, many times not informing anyone of hiking destinations or plans.  I like to think I'm smarter now, but realized that I had gone on a hike in the same wilderness in which we were searching only a week earlier.  Because it was a short hike, I rationalized that I didn't need a lot of stuff, and there would probably be people there (there weren't), so I didn't have to leave an itinerary.

If you go missing in my area, we will search for you.  We will risk our own lives scrambling on rough terrain in grizzly bear country and flying low and slow in helicopters.  We will do this whether or not you were really lost, if you did something dumb like jumping in a fast river or venturing out past a warning sign, and we will even search if we really have no idea where you might be.  But if you really want to be found, here are some things to do:

Being part of a search party is pretty terrible.  You think of all the things that could have happened: bear attacks, drowning, hypothermia.  The parents are often there, desperately holding onto hope.  You wish that the person had just told someone their plans, turned back sooner, carried more gear.  Finding the body is almost a relief sometimes.  At least then you know.

If you disappear, we will look for you.  But before you step on the mountain or the trail, please take a moment to think.  Please help us find you.

My phone thinks I'm lazy, and other randomness

I've been traveling so much for work lately that I haven't had many outdoor adventures.  It's still snowy in the mountains, so there aren't any fires to report.  Hence, a list of miscellaneous observations from the last week.

I have a step app on my phone.  It came with it, but I never really use it, because I don't take my phone into the gym, to run, or really anywhere I would generate steps, unless I take it hiking so I can take pictures.  Consequently, my phone is pretty disappointed with me.  "You haven't been very active lately," it chastises.  "Do you want to readjust your goal?" It seemed unreasonably happy when I got 40,000 steps while climbing a volcano in Iceland, but now it seems I keep letting it down.

I saw two people smoking outside the gym and thought it was pretty funny.  If I were a smoker, I'd probably walk over by the grocery store instead.

The person in the middle seat on the plane always gets the armrests! ALWAYS.  Why do people still not know this?

You can grow out of a lot of things.  Apparently, an allergy to poison ivy is not one of these things.

I'm so used to traveling by myself that I'm probably somewhat annoying at times to a travel companion.  I don't want to sit next to a bunch of other people in the airport, worry that I'll get a middle seat if mine is unassigned (I did), and announce that we are going to miss our connection (we did).  Sorry...

Southern hospitality is a real thing.  Why are you people so nice?

I've been seeing men wearing leggings, and not just in the gym.  Men in leggings: pro or con? Discuss.

Speaking of leggings, most men seem to think that yoga pants and leggings are the same thing. No, no, no.  They are not.

That's about it in this corner of the blogiverse.  What's going on in yours?