The day was already getting off to an unexpected start.  I was supposed to be flying to Las Vegas to help teach a class, but the government shutdown meant canceling those plans (and the class).  Instead, I drove toward a trailhead, only to find freezing rain and icy roads.  Since the trail was quite a bit further away, I decided to punt and go to a closer one.

I pulled into the winter parking area only to find it full.  Some camo-clad guys with hunting dogs eyed me curiously but didn't offer to move their crookedly-parked truck.  I gave up and drove home.  The trails near my house would have to do.

Most of my life I've lived close enough to walk or run to trails in the woods.  Sometimes they were spectacular, right outside the door in national parks. Other trails were more modest, like the ones through the woodlots at the university I went to.  I don't know if I would have become a runner if there weren't trails near my childhood home.  At fourteen I ran in the woods with my sister and our friend Laura,  jumping over logs and shuffling through autumn leaves.  The roads just weren't the same.

The trails at the end of my street were created during logging years ago.  They aren't incredibly scenic, although if you climb a ridge you can see the mountains.  But you can run on them, or mountain bike, cross country ski or snowshoe.  They're on state trust lands, so people won't build houses there.  Occasionally the creek will flood parts of them, and some dog walkers don't see anything wrong with leaving poop in the middle of the path.  But if you live here, you don't need to drive anywhere.  You can put your snowshoes or skis on in your driveway and head out.  Deer live there, so maybe you'll see one.

Sometimes you just want to disappear into the woods.  You don't want to make a plan, go to the gas station, or pack a lunch.  Local trails are the answer.  I hope to always live near one. 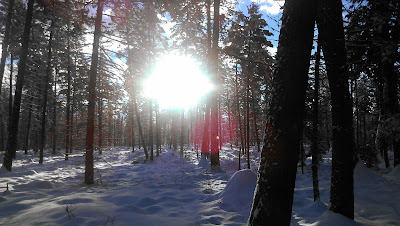