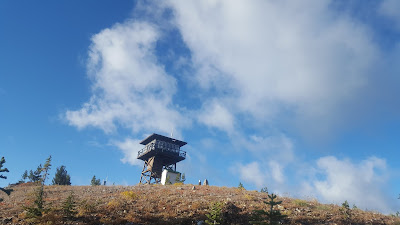 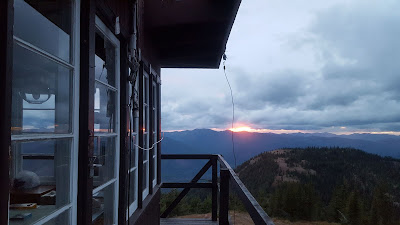 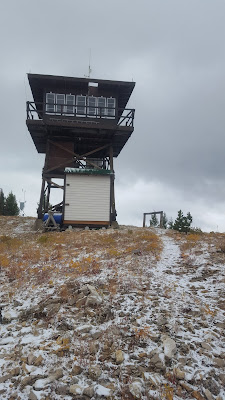 What's it like to live and work at a fire camp, you (didn't) ask?

As a new firefighter, my first glimpse of a camp was sort of overwhelming.  Our school buses rolled to a stop outside a miniature city, complete with a caterer, showers, and 3,000 people in it.  It was bigger than the town I lived in.  Little did I know that I would experience many such camps in the next 30 years.

I soon learned that camp was not a place most people desired to be.  "I had to get out of camp," people on overhead teams are often heard to say as they escape to the fireline.  "They're moving the camp to the helibase!" helitack people often exclaim in dismay.  Camps can be noisy, with generators, vehicles, and people talking loudly on their cell phones.  They are often a hotbed of disease: the "camp crud" is well known and feared, sending sniffles and hacking throughout the crew.  Someone always seems to set their tent up right next to yours and inevitably begin snoring.  There are porta potties.  You hope the food is good, but sometimes it isn't, or it's so late you have to choose between sleep, food, or a shower.

Meetings start early at camp, sometimes at 5:30, and if you're part of the overhead team, they can go late into the night as you rush to get paperwork completed for the next day's operations.  There are meetings to plan meetings.  If you need something like batteries, there is generally a supply unit.  Beware to the crew that tries to keep a returnable item though, because they will track you down and make it difficult for you to leave until you produce it.  These days there is usually a weed wash station to prevent the spread of noxious plants, and sometimes an enterprising T shirt vendor encamped outside the gate.

For me, the best fire camps are at the helibase or on the fireline.  You miss out on hot food much of the time, and there aren't any showers or medical tents to grab moleskin or bug spray, but in exchange you can pitch your tent far away from other people and look at stars at night instead of the lights outside of the mess tent.
Camp has its fun moments.  When you're in charge of something on the fire and people listen to you, it's good to be there.  You often run into people you haven't seen in years.  Also, there's sometimes chocolate milk.  Fire camps are also necessary to support the operation, consolidate supplies, and feed the firefighters.  But don't look for me there! Most likely I will be as far away as I can get. 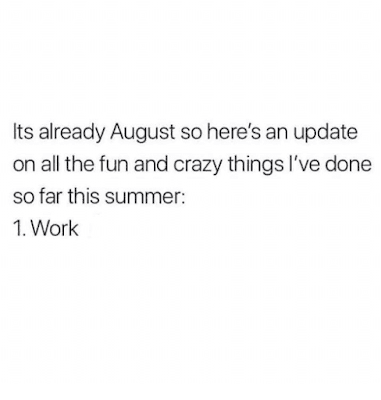 Except, it's now September; how did that happen?

Most of this summer has been nonstop work.  Luckily, a lot of it has been pretty fun: flying around finding fires and sizing them up, landing at fire lookouts, and getting to see some places that most people never see.

The crew is hanging in there, although some of the minions are starting to dream about skiing and time off.  Although this month is also known as Snaptember, there have been no real brush fits or meltdowns (a few safety naps have been observed).

We fit in workouts when we can; sometimes it's only a short, bear-dodging run.  B., when told he had to stay in the area, puts on a weight vest and attacks an ancient elliptical machine. K. watches a ski movie and does box jumps.  The mechanic goes for a stroll; when he returns he finds bear tracks on top of his footprints.  The huckleberry crop in the high country was poor this year; the bears are staying low.

A couple trainees join us, and we send some regulars away on assignments.  It's stayed smoky most of the summer, but there are persistent rumors of rain coming. 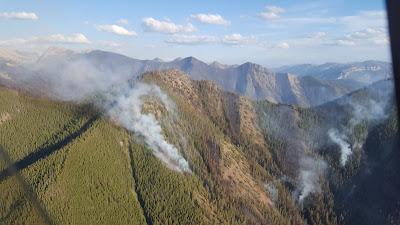 We are all hanging in there.  Thanks for the support!