If a young girl were to read the latest stories about becoming a female wildland firefighter, she would be horrified.

Rampant discrimination.  Harassed by men at every turn.  Forced to quit, even.

This isn't my story.

I'm not saying this doesn't happen to some.  It has and it does, and it shouldn't.  But it wasn't and isn't the reality for me.  Yes, there were times when there was inappropriate talk and behavior.  When men closed ranks, shutting me out of discussions and decisions.  But it wasn't enough to make me leave.

What made me stay? Something must make this dirty, dangerous, underpaid, male-dominated career worth it.  We don't keep doing things if there is no benefit.  Even the addicts I have known wouldn't quit chasing the high, despite the inevitable low, until the negatives outweighed the positives.  The juice must be worth the squeeze.

When I think back over the last 30 years, the answer to that question doesn't come fully formed.  Instead, there's a series of flashbacks, pieces of memories, that run through my mind: the sweetness, without any of the bitter:

-My first fire, staring incredulously at 200 foot flames as they rolled over the mountains;

-The sudden surprise of a snowfall on a fire high in the Cascades;

-Spotting smoke in the distance with  my coworker Ron in the Tetons, getting on the radio and saying "we're ten minutes out," no matter how far away we were;

-Evacuating people ahead of fires and knowing we saved their lives;

-The exhilaration of climbing out of a wrecked helicopter and knowing I was alive;

-Sleeping on a remote rappel spot while elk bugled all around us;

-Lighting fire around cabins in a last ditch effort to save them, and celebrating because they made it;

-Flying through Glacier Park with Chris the pilot, looking at lakes and mountains and glaciers, both of us incredulous at our good fortune to be there.

It's been bittersweet, all these years.  But it's been more sweet than bitter.  It was all worth it. 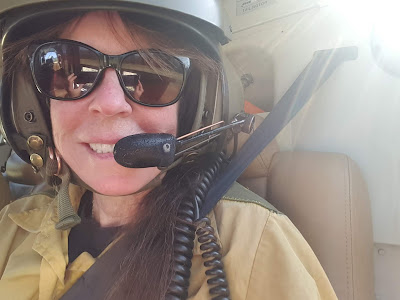