A coach kind of person in a first class world

You guys! I just got back from Hawaii! I'll write more about that in future posts, but for now I wanted to talk about something I had always heard was fabulous but could never bring myself to pay for.

I realize that people do this all the time.  I see them in their plush seats as I file back to steerage, glumly expecting to fight for space in the overhead bin, relinquish the armrest to a space bully, and have my seat kicked for six hours by an exuberant kid.  But I only passed through this fabled land, never wanting to pay extra for it.  Instead, I made the best of Economy, even on one fourteen hour flight.

That's right, people.  I once spent FOURTEEN HOURS on the SAME plane.

But when I was googling Hawaii flights, frustrated by a long government shutdown and multiple blizzards, I realized that I could use my airline miles for a first class ticket and still have plenty left over for the future.

I sat in my first class seat, feeling like an imposter.  I felt like Elaine in the Seinfeld episode where she sneaks up to first class and gets kicked out by the flight attendant. The seat was so comfortable! A huge armrest separated me from my neighbor.  There was no way she could spill into my seat.  There was free food! Free digi-players to watch movies! The flight attendants were so nice!

To my delight, I discovered that my ticket also gave me entry to the airline's lounge.  I had only been in one of those once, when I had a free pass (and also saw Sarah Michelle Gellar in there).  More free food! Free drinks (although, who drinks whiskey at 6 am? Apparently a few people).  Comfy chairs with space in between them.  Nobody coming to sit right next to me with stinky fast food.  This was the life!

The flight back home was a red eye, normally pretty miserable for me as I try to sleep but constantly get woken by noisy neighbors, drink carts, and midnight readers turning on lights.  First class made it much more bearable, even though my seatmate, a night owl, typed on his iPad at 3 am. Curious what he was doing, I looked over, only to see a document headed "Personnel Evaluation: Confidential." I quickly looked away, but not before I saw a few sentences. (Sorry Becky, you're not going to like your review).

I'm sure on my next flight I will be right back in Coach where I belong.  But it was fun to visit the privileged land for a brief time with the folks who were paying $1000 a night to stay at the Four Seasons.  That really isn't me.  But it was fun to pretend. 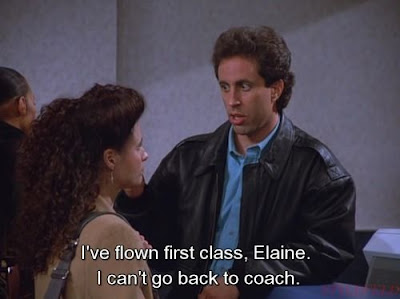