The minions are coming

The winter quiet is about to end.  The seasonal employees start on Monday, which means organized chaos is about to begin.  Our little gym will be full of crossfitters and enthusiastic weight lifters.  Somebody will forget to bring something vital.  As always, one person won't have computer access despite many forms designed to prevent this.  Somebody's training folder will be missing.  It may snow.

This will be a weird year for my crew because on Monday only one temporary employee will appear.  Unbeknownst to him, he will have several bosses just focused on him.  For a variety of reasons, two other minions will trail in weeks later, having to play catch up with required training and fitness tests.  The other one, scheduled to arrive on Monday as well, bailed on the job with ten days to go, fleeing for another position she didn't inform us she was applying for.  As her figurative bridge burns, I cancel her paperwork and computer access, in a surly but resigned mood.  It's a seasonal job, after all.  We try not to expect too much, but in truth with the budget we have we can't do the job without them.  As it is too late to hire a replacement, we will make do without her.

My favorite pilot informs me he won't return, instead going to staff a Type 1 helicopter where he will be able to fly solo and presumably make more money.  We will have a new mechanic/fuel truck driver as well, someone to teach the main helispots and roads.  We are used to this, too.  It's a vagabond lifestyle; every company seems to pay differently and offer different benefits.

From now until late October, solitude will be hard to find.  There will be more people to supervise, teach, and watch out for.  Sometimes it's hard to make that transition and we wish for the cold but quiet winter days when we can come and go, responsible only for ourselves.   It's good though, to see the enthusiasm of the newbies.  It makes us a little less cynical, a little more excited for the future season.  Will there be fires, and where will they be? Will we get some million dollar views as we fly over the park? Only time will tell. 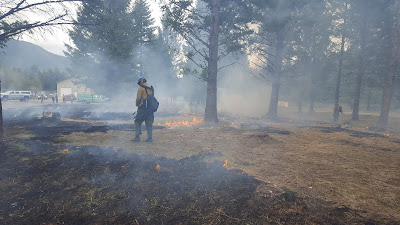 The little girl ran out of the gym as I was walking in. "Rain! Rain!" she yelled excitedly to her mother.  "I love the rain!"

All kids whine about the weather at times, but most of them will play outside in all conditions regardless.  As adults, we complain about it, change plans, stay inside.  Sometimes this is prudent, but often it just takes effort and acceptance, and the day becomes an adventure.

I hope that little girl never loses her love of the rain, and still runs out toward it while other people are rushing inside.

The in between season

R. and I hike toward the hidden waterfall.  Some places we can walk along on clear trail; others we navigate ice and deep snow.  I'm wearing shorts, but at one point we are caught in a passing snow shower.

This is spring in the mountains.  Some people around here don't like it.  And at first glance, it's easy to see why.  Snow sports are pretty much over with, but most summer ones are difficult or impossible.  Bears are coming out of hibernation, hungry and irritable.  Almost worse, ticks lurk on the bushes.

But there are some advantages to the season.  Hiking in shorts, for one.  The majority of the tourists have not yet arrived to create traffic and fill the trailhead parking lots.  Soon flowers will appear.  Spring means access to high trails and peaks is around the corner.  Spring is a promise.

So I'll put up with muddy running routes, snow patches we have to posthole through, and unsettled weather, because it means summer is coming, with its soft air and long days.  Welcome, spring! I'm glad you're here. 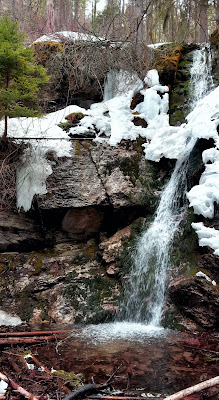