We sat in the car at the trailhead, looking out the windows.  We said hopeful things like, "It looks like it might  be clearing up a little."  It rained, and rained some more, but we weren't the quitting kind, so eventually we got out, and started walking.

The trail was really a closed road.  We passed several piles of bear and wolf scat.  The clouds hung low over the mountains, only affording  glimpses of the normally expansive views.

Still, we were outside, not stuck in a gym or sitting on a couch.  We laughed and talked, and soon, past some snow patches, the fire lookout came into view. 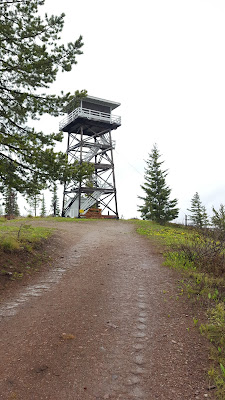 On a normal rainy day, we would probably tag the lookout, take a few hasty photos, and head back down.  But today I had the key, being given permission to go inside and check the facility.  In the fall, some lowlifes had broken into the lookout and stolen some things.  In return for being able to go inside, I would return with a condition report.

One of my friends had never been inside a fire lookout, and the other had staffed a few, now vanished, lookouts in the past.  They happily climbed the stairs.  We removed some shutters so we could see outside, and built a small fire in the woodstove while we ate lunch.  Spying a large flag in the corner, D. decided to fly it, since the next day was Memorial Day.

The rain finally let out, and tall mountains peeked out through the fog.  I showed R. how to use the fire finder.  We took multiple pictures of the flag flying over the catwalk.  Finally it was time to go.  We put out the fire and replaced the shutters and made our way down.

The rain scared a lot of people off from hiking that day.  We could have changed our minds and stayed home.  But if we had, we would have missed out on the talk and the laughter, and the two hours inside a little sky house, with a warm fire burning, watching mountains come and go and the flag blowing in the wind. 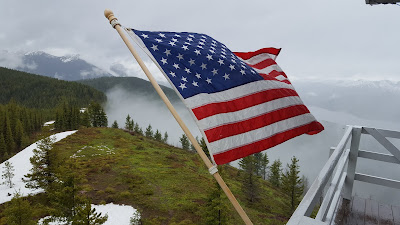