When (not) to call it

"Ugh," I whined while climbing through a pile of downed trees across the trail.  "It's ok with me if we go somewhere else."

The trail was seldom used.  Barred from accessing the flatter, maintained one because of a road closure, we had opted to hike this one.  It had not been cleared for a few years and was brushy and faint in places.  Our feet were soon soaked by the wet vegetation.  We scouted for the trail in spots, finding it by locating cut log ends.  We dragged ourselves over large fallen trees.

We kept going, buoyed by the hope that it would probably get better, and eventually it did.  The trail broke out onto open slopes full of flowers, at one point bisected by an active bear den (although the resident was gone for the summer, we hoped).  Eventually we arrived at our goal, a former lookout cabin high on a ridge.

None of us really wanted to turn around.  It's always hard to do, on a run, a hike, a career, a relationship.  You've already invested so much; it's bound to get better, isn't it?  Usually it does, and you find yourself in a beautiful place, the struggle to get there mostly forgotten.  Other times you've gone a little too far, and end up injured or near hypothermic or heartbroken.  When in doubt I've mostly rolled the dice and taken the chance.  A few times this has led to spectacular failure; most times it's been worth it.

We didn't turn around.  We knew we probably wouldn't, that the whole five miles couldn't be as bad as the first, that the trail climbed so steeply that it was bound to ascend above the big trees quickly.  We sat in the cabin, enjoying our good fortune.  And the way down wasn't so bad after all.

When do you call it? Is there a time when you should have but didn't, or when you did, but regretted it?  Tell me a story! 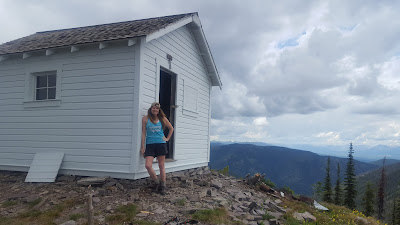