Usually by this time I'm plotting my escape, even if it never actually happens.  Last year I fled to Hawaii in the middle of an arctic blast, busting through drifts at 4:30 am to get to the airport.  This year, not so much.

We are having a mild winter, despite predictions (take that, Farmer's Almanac).  Forty degrees and raining in January? Not normal, but I'll take it.  Hiking without snowshoes in many places? Okay!  We have had one "cold" snap, and it wasn't even below zero.

Even better, there is enough snow in the mountains to satisfy skiers, while it remains mild in the valleys, so there is a minimum of whining from winter lovers.  I can still run on my local trails, yet put on snowshoes for higher elevations.

Of course, we still have a ways to go, and I might spend February buried in layers and cursing myself for writing this blog and jinxing myself.  But I choose to think positively.  There is more daylight every day, and today I saw a rainbow arching over the entire valley.

I choose to believe that spring is right around the corner. 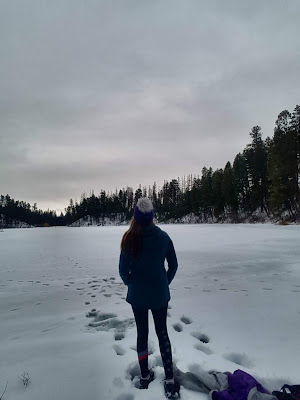 Travels with a wilderness baby

We eyed C. and her baby doubtfully.  This was going to be an arduous snowshoe hike, with a lot of elevation gain, trail breaking, and snow in the forecast.  Besides the weight of her 10 month old in a front pack, C. also carried a backpack and a sleeping pad to sit on.  But she looked tough, and was half our age, so we started out.

D.'s son had broken trail two days before, but it had been windy overnight, and his tracks disappeared in places under drifts.  We traded off breaking trail as we climbed to the lookout point.  The baby fell asleep immediately as her mother started hiking.  She woke up at the ridge where we stopped for a snack, looked around with interest, and smiled.

We continued on, along a narrow, airy ridge and down into a magical valley.  I think it snows here more than anywhere in the area.  The trees are encased in white; we call them snowghosts.  OUr snowshoes sank in the drifts.  There was a creek below our feet, but it was covered by snow.

We climbed out of the valley and onto slopes that in the summer are covered with brush.  Still, the baby rode along contentedly, only fussing when her beanie slipped down on her face.  This was obviously not her first rodeo.  She seemed at home in the woods, the cold and the snow.

We were tired on the way down.  We all fell; R. and I resorted to the tried and true butt slide down some of the hills.  We giggled like kids; the baby regarded us solemnly.

I'm glad to see that little A. is being brought up to spend long hours outside.  I hope she grows up to love the wilderness and feel comfortable there.  I also hope that we can return to this hike when she can walk up there, and we can see all this beauty through her eyes. 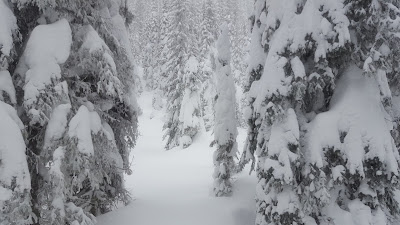 Late to the party: Audiobooks edition

Weird fact:  I don't really listen to music.  I'd rather hear a murder mystery or talk show on the radio.  But I do take music to the gym, because otherwise I'd have to listen to people's conversations or the loud clatter of weights.  I find weight lifting pretty boring, so music helps a little; however I often find myself thinking something like, ok, 5 more songs and then I'll be done.

All this changed when my book club chose a book that I couldn't find in the digital library except as an audiobook.  I didn't want to buy it because it didn't really appeal to me, so I reluctantly chose the audiobook.  From the free library app, I could open it on my phone.

I hadn't ever listened to audiobooks.  If I'm going to read, I'd rather have a book or Kindle in my hands rather than a voice talking in the background.  I wanted to control the pace at which I read.  I was sure I wouldn't like it.

I opened the audiobook.  Twenty hours to finish, it said.  Getting through this book would be a part time job.  Then I had a brilliant thought.  I could listen to it at the gym! Of course, I wasn't going to go to the gym for 20 hours before book club, but I could put a dent in it.

I discovered that I liked listening to a book while I exercised.  Unlike songs, I didn't know where the narrative was going.  The plot distracted me from the monotony of the gym.  Time seemed to go faster.

The book was interminable, and honestly, I might not have finished it if I had had to slog through the paper version.  I left it on while I cleaned the house and listened to it when I went for walks.  There was something to this audiobook thing, I decided.  When I was done with it, I downloaded another.

I'm not really an early adopter.  I once was heard to say, "I'll never get a cell phone," and this was after the year 2000.  But I'm happy to say that I was wrong and audiobooks are really kind of okay, especially at the gym. 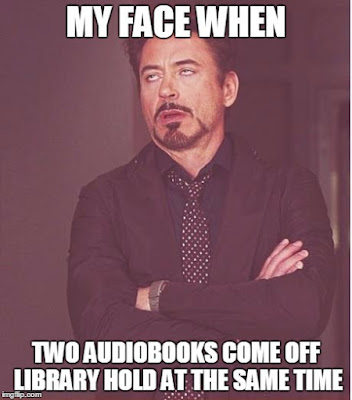 I once knew somebody who was faced with a significant work decision.  When I asked what he thought about the impact it would have on a loved one, he replied airily that he "was good at compartmentalizing," which I learned was code for "I'm going to do what I want, even if it negatively affects others."

I'm not good at all at compartmentalizing.  I worry that my cats miss me when I'm gone.  I overanalyze decisions.  I get buyers remorse a lot.  If someone seems mad, it bugs me for a long time.  It would be easier to be able to put things in neat compartments and not worry about them, but I can't do it.

"Australia is interested in you," the work text said.  I agonized.  It was a month-long assignment. When the first two groups went there, it would have worked.  Friends and cat sitters were available; it was the holidays.  One of my cats seemed to be doing well after her last dental surgery.  People were around and could have spent some time taking care of the cats and my house.  Nothing was going on at work.

But now, a month later, those friends weren't as available.  They had to work; some had work travel; a month commitment was too long for them, even with pay. They had their own pets to care for.  The princess cat had to return to the vet, her issue not yet fixed.  Hiring was set to begin in a couple weeks.  Leaving for 30 days didn't seem as easy anymore.

I could have gone.  Most people probably would have. It was an incredible opportunity and Australia could use the help.  I could have patched together a group of people who would come in to check the cats for a few minutes a day, hoped the kitty's medical problem didn't get worse, and tried not to care who got hired.  But in the end, I didn't go.  Someone else did.

Was this the right choice? Not financially, and not in the adventure sense.  Maybe it was a mistake, or maybe down the road in the next few weeks I'll be glad I didn't go.  I wonder what it would be like to be a person who just charged ahead, not caring about consequences.  Maybe they just pretend not to care.

Because I can't compartmentalize, this line of thinking leads me to ponder other choices in life.  Many were wrong.  Some, while wrong at the time, led to better situations in the future.  So I guess you never can tell.  You just make the choice with the best information you have at the time, and take one of the forks in the road you are facing.  You just hope it will take you somewhere interesting. 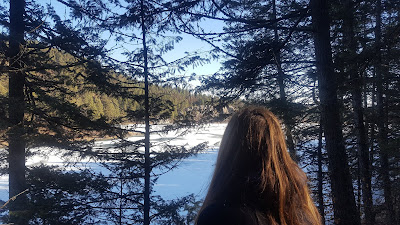